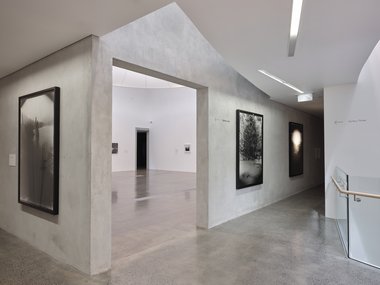 Campbell is an extraordinarily inventive, well-travelled and curious artist who has made works in Aotearoa, southern California, and Antarctica: using all manner of photographic techniques—many conspicuously antiquated—such as wet plate collodion on glass, daguerreotypes, photograms of microbial growths, and other unusual analogue techniques that include long scrolls of printed images that descend from one floor to another like a waterfall.

Using two floors and a lift (in total: six variously sized rooms) this iteration of the Adam show examines Joyce Campbell’s static and moving image photographic accomplishments. It has a slightly different inflection from the hefty new Campbell anthology that John Welchman—the San Diego art historian known for his Mike Kelley publications—has edited (I will be reviewing that over the coming holidays), and takes advantage of the unusual Te Uru architecture.

And unlike the larger Adam presentation from last year in Wellington, there is not an assortment of photographed pages from the extraordinary associated show that features the Te Haahi Ringatū document (containing prayers, hymns and whakapapa) written by the military and religious leader, Te Kooti Ārikirangi Te Turuki. Only one image. Nor crystalline images from Brittle City (2004-5). But instead some new LA Botanical images

In many of the works (particularly Te Taniwha images began in 2010), Campbell has collaborated with Richard Niania (Ngāi Kōhatu, Ngāti Kahungunu ki Te Wairoa) a tribal historian and kaumatua. Their work together is crucial. Campbell’s family are based in Wairoa.

Campbell is an extraordinarily inventive, well-travelled and curious artist who has made works in Aotearoa, southern California, and Antarctica: using all manner of photographic techniques—many conspicuously antiquated—such as wet plate collodion on glass, daguerreotypes, photograms of microbial growths, and other unusual analogue techniques that include long scrolls of printed images that descend from one floor to another like a waterfall.

Her show is complex, exploring some themes in great depth, and only lightly touching upon others; perhaps because of space limitations. Here are eight highlights; works I consider particularly thrilling:

Taniwha i-iv, vii (2010) gelatin silver negative. These shots of a big fat eel photographed wiggling in a tank, are fantastically dramatic. As well as referencing local Māori mythology they succeed formally through shrewd juxtaposition and sequencing, having an unusually physical presence in the gallery space.

Regrowth, Whakapūnake (2013), is a delicate sterling silver sculpture hanging in a corner within The Thread series, but paired with a separate photograph. It is based on fibrous Nikau Palm roots and links beautifully with her large hanging scroll works and zigzaggingly frenetic electrical charge films.

The Manuscript of Ᾱrikirangi (2015), colour negative. This powerful contemplative image of Te Kooti’s personal dossier/notebook that hints at an inner serenity quite different from the ferocious persona depicted in the Pākehā colonial press.

Flightdream (2014), a digital video, is a film of moving ectoplasmic threads slowly disconnecting and drifting through murky fluid; suggesting the bottomless Mariana Trench. Accompanied by wonderfully abrasive, clanging, noise guitar, in the Te Uru lift it lacks the impact of its installation in other larger galleries. Still very exciting nonetheless.

Ice Ghoul (2006), daguerreotype, is a surprising ‘gothic’ image from a Ross Sea residency in Antarctica. It has primal resonances as facial recognition from three dark ovals in ice is about as elemental as you can get.

LA Botanical (2006-7), wet plate collodion on glass, is a fascinating suite of 34 south Californian plants and cacti, almost all of which have properties human beings can benefit from. Ranging from medicine, recreational drugs, oils, food, drink, and leather. Ann Shelton has

To the Wash (2014), colour negative, is a suite of landscape images in California that show tough wiry shrubs and trees that thrive in semi-arid conditions and which attract human detritus during flash floods. They reveal what a wonderful colour photographer Campbell can be.

Hosting (1998) photograms featuring microbial samples and agar on Plexiglas plates. These unusual early works some might find repulsive-being linked to mould—but their colour is delicate and the stochastic formations enthralling. When these first appeared, Campbell’s investigative approach was a revelation, attracting many admirers. Rightly so.

She hasn’t slowed down since.