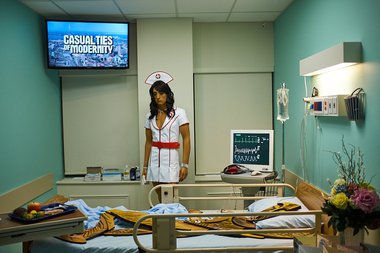 As a gender-fluid political agitator Monkman has a lot in common with the Australian /Chilean painter Juan Davila (well known in the eighties through police confiscation of his work during a Sydney Biennale), though Monkman's painted images are not so wildly imaginative nor so outrageously explicit.

Tucked away in the Iris Fisher room—as part of an international Te Tuhi ‘lockdown’ group show where Ngahiraka Mason (via selected artists) optimistically looks at the future impact of the Covid crisis through the personal philosophy of Te Rangihiroa—is a refreshing fourteen minute video by the provocative Cree (painting, moving image and performance) artist, Kent Monkman; a work that uses satire to examine postcolonial issues of modernist origin via an ‘art historical’ / ‘hospital’ soap opera narrative.

Monkman is well known in Canada for his debate-generating tableau painting Hanky Panky (2020) where he depicted the Canadian Prime Minister, Justin Trudeau, about to be consensually (and publicly) anally penetrated by the Indigenous artist’s alter ego, Miss Chief Eagle Testickle. The latter is a self-consciously ‘mischievous’ (but charismatic) persona who as a nurse doing art historical research also dominates the high-camp Te Tuhi work, Casualties of Modernity (2015) [click here to watch]. (Monkman has since apologised to Trudeau for implying that the depicted activity in the painting was not rape.)

As a gender-fluid political agitator Monkman has a lot in common with the Australian /Chilean painter Juan Davila (well known in the eighties through police confiscation of his work during a Sydney Biennale), though Monkman’s painted images are not so wildly imaginative nor so outrageously explicit. He is more interested in traditional art historical compositional formats than making emotionally volatile and formally innovative lampooning ‘cartoons’. However Casualties of Modernity is a pretty compelling video, wryly exploiting his skills as an attractive, flirty and unabashedly forthright performer who looks hard at the early development of modernist painting.

Monkman, as this extremely fascinating and articulate artworld personality, is exceptionally crafty at attracting publicity, such as when he reprimanded the French fashion designer Jean-Paul Gautier for appropriating a First Peoples’ war bonnet, but then married him in a performance work (let’s face it—a brilliant stunt!) so he could be allowed to apologise.

In this sense, he is a Cree version of Tūhoe’s Tame Iti, perhaps? Social agitation and charm combined. His video in Pakuranga is an absolute treat.