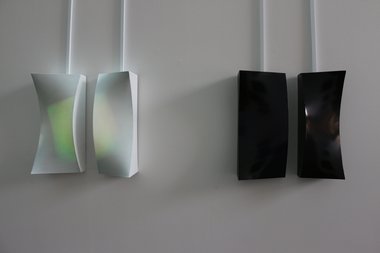 However, there does appear to be an inherent incongruity present. We on the one hand are enjoined to observe the beauty of the passage of time (albeit transient), noting the changes as light passes across an undulating field of colour—creating different tinges and tones when diurnal rhythms play out their common rotations—while on the other hand the use of the Zen ensō circle, scored across the surface of the sculptural forms, directs us to contemplate the timeless and eternal.

Shine a light. Many artists down the ages have done so, playing with the power and incandescent effects of the shimmering ingredient - Caravaggio, Rothko, Edward Hopper, Jenny Holzer, Len Lye, Bill Culbert. From film noir to chiaroscuro to florescent tubes, shadow and luminescence has been employed to communicate tragedy, anomie, ennui, kinetic energy, truisms and the glow of colour in various guises and startling creations.

Aspects of these elements feature in the work of Nelson based Larisse Hall, currently showing at the Gallagher Academy of Performing Arts Gallery, Waikato University. Her ‘light sculptures’, minimalist painted 3D concave/convex forms, ‘light infused paintings’ are fitted with internal light sources (programmable 12 V LED lighting) which modify according to the environment they find themselves located in.

They are also constructed and painted (using traditional techniques of glazing with oil paint) to help catch and reflect the externally changing light of daytime and evening. As a consequence, the works exhibit various fluctuating hues and tones, thus becoming bearers of both light and time, custodians of beauty and ephemerality in a fluid and symbiotic relationship between inner light source and outer location.

Hall wants to alert us to the exigencies as well as the inherent value of time, something the poet Wordsworth also brought to our attention with his complaint two hundred years ago about the world of material avidity sapping our attention, with the potential to “lay waste our powers”. This troubled imperative is reflected in the title of Hall’s show, Smell the Roses, a clichéd injunction to take your time, to slow down, to use time wisely.

This is very worthy, sober and useful advice, while the works themselves—immaculately painted and configured—present a satisfying aesthetic pleasure.

However, there does appear to be an inherent incongruity present. We on the one hand are enjoined to observe the beauty of the passage of time (albeit transient), noting the changes as light passes across an undulating field of colour—creating different tinges and tones when diurnal rhythms play out their common rotations—while on the other hand the use of the Zen ensō circle, scored across the surface of the sculptural forms, directs us to contemplate the timeless and eternal.

The treasured nature of time, a thing to be valued, prized and cherished, is set off against the more transcendent nature of the timeless. How do we reconcile these seemingly polarising elements in the same work?

Max Gimblett is another who employs the Zen enso circle as a central motif, and here too, the Buddhist notion of enlightenment, symbolized by the circle, represents the triumph over time, its negation, the instant it dissolves into the eternal moment. Perhaps Hall might exploit the rationale that any meditative attention given to the passing of time reminds the viewer of the temporality of all things—all things must pass, as George Harrison sanguinely expressed it—prompting a need to find solace in some vision outside time. That might sound like a strained attempt at reconciling a contradiction, and not one the artist might concur with. But these divergent and opposing ideas do need some rationalisation.

This is something the artist needs to rearticulate given she is employing an acclaimed and recognized symbol that operates in a certain particular manner, one that simply cannot be picked up and added to a piece of work to give it a hired profundity.
Nevertheless, these sculptural shapes, oozing radiance and dynamic form, possess a arresting presence. And attention is what the artist demands of the viewer. Embrace the New, 2018, for example, in its day and night manifestations, provides startling differentiations as the work is observed over the passage of time.

That means that the viewer return to the work at different intervals in order to perceive these modulated shifts and appreciate the full extent of the inherent sculptural/painted/light/colour properties. Time and light play out a little choreography here, reminding the viewer that sometimes it takes time to see the radiance, grace and even glamour of things.
Peter Dornauf

Thank you Peter for inviting discussion and clarification regarding my 'Smell the roses' series, as was installed at The Gallagher ...

Thank you Peter for inviting discussion and clarification regarding my 'Smell the roses' series, as was installed at The Gallagher Academy of Performing Arts Gallery, The University of Waikato.

Fusing the ethereal quality of light with the materiality of paint and form, l use light, as both medium and a time reference. We wake and sleep to the rhythm of time and light. It is the basis of existence. Directing routine and our daily rituals.

Exploring the value of time within everyday context, l use the 'enso' not just as an 'enso'. As an act of spontaneity, I use it to also acknowledge our everyday actions. Capturing this action in paint and immortalising it into the future, representative of the permanent resulting from something seemingly impermanent and of no consequence at the time. For example – the decision to recycle that used can of beans, or rubbishing it, to become landfill. Each scenario impacting our future and generations beyond.

The ephemeral act of spontaneous mark making becomes past, in our future, when archived in paint. Taking inspiration from Olafur Eliasson and Minik Rosing 'Ice Watch' (Copenhagen 2014 and London, 2018), the mark identifies our present actions, seemingly inconsequential, and speaks to their longevity, beyond our finite time here in this world.

Time is a constant yet not an infinite resource.