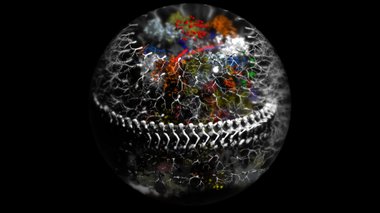 Bennett's energised manic images about mass obedience and conformity are maybe an acquired taste. They are undeniably grim in what they say about our species, but through repetition are also funny and poetic, and perhaps can be interpreted as an advocacy for sensible community action—if you don't read them as flippant.

Using the narrow upstairs Two Rooms gallery, Auckland animator Gregory Bennett (as on previous occasions) presents three new works, one (Embowered II) a large projection on the end wall, and two (Edifice I and Edifice II) screened on monitors positioned down the other end.

With the Edifice works, Bennett positions these hyper-active coordinated figures within rickety cylindrical architectural structures or in levitating milky circular ponds. In Embowered II however, they move within descending transparent spheres, microcosms trapped inside paperweights (or snow-globes) and packed with brightly coloured luxuriant foliage, pulsing vegetation that is constantly sprouting and then quickly withdrawing—only to frenetically re-emerge again.

Unlike previous works Bennett seems to be now using softer more pastel hues and the occasional metallic silver, even though saturated colours can still dominate. He is also using blurry out-of-focus translucencies for greater spatial depth, and emphasising the collective impact of co-ordinated moving limbs and totally downplaying individuals.

Bennett‘s energised manic images about mass obedience and conformity are maybe an acquired taste. They are undeniably grim in what they say about our species, but through repetition are also funny and poetic, and perhaps can be interpreted as an advocacy for sensible community action—if you don’t read them as flippant. Once futuristic and critiquing sci-fi, they are that no longer; being accurate observations of our current super-unified (unfragmented) world where disease, technology and information spreads rapidly and where international cooperation is an extremely positive thing.

Edifice I seems to be mocking extravagant waste, urban clutter, and clusters of satellite junk. It mixes teetering and disintegrating towered constructions of wooden planks with a hokey steampunk ethos and plastic model kits.

Edifice II is a bit different with a few individual figures strutting their stuff. They jump, march and swim, and often are joined to red tree roots on their backs that double as neural dendrites. In this world, perhaps it is ‘tree huggers’ who themselves become arboreal, with sensitive empathy even creating physiological transmutations. Around the obliquely angled discs that double as gymnasium platforms or swimming pools, circle strangely menacing, metallic sluglike turds stuffed with popcorn detritus.

These are wonderfully surreal and thought provoking videos. Bennett is always reliable. From him, a typically excellent show.