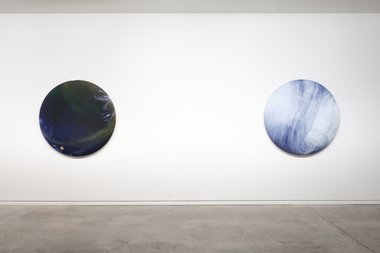 Thomson's flattened orbs encourage pleasurable mental speculation about planets existing within other universes, other galaxies—as well as thinking seriously about the fate of our own. They provide plenty of stimulus in both directions.

Made with lacquered over vinyl film on circular resin and fibreglass forms, Thomson has incorporated parts of found images and her own photographs. Many of the evocative composite shots reference rock and sand shapes found in Chile and the dry Atacama desert. The detail of the gouged rivulet-formed gullies and windcarved rocks is extraordinary.

It is a clever idea to use circles this way, to turn the gallery into a kind of planetary observational chamber with the viewer centrally positioned as the sun, as if a telescope in the centre space is being turned to enlarge and scrutinise each consecutive wall exhibit one at a time. And the tondos themselves can be rotated on the walls, on each occasion subtly changing the viewer experience. Presented as a varied group, their visual impact is considerable.

In the large gallery I was particularly transfixed by the south end of the space, where the works tended to be more holistic and less compositional: having not so many isolated ‘islands’ and more covering cloudlike ‘film’. Each disc changed greatly according to the distance you stood from it, a virtue of their size which permitted a lot of detail that would then dissolve as you retreated.

Thomson’s flattened orbs encourage pleasurable mental speculation about planets existing within other universes, other galaxies—as well as thinking seriously about the fate of our own. They provide plenty of stimulus in both directions. They are magical catalysts.