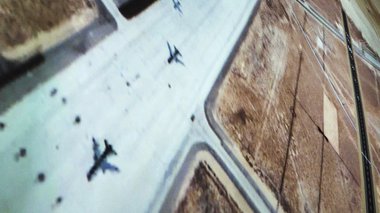 The three videos here in 'Ex-Post' are from three of the artists in Remco de Blaaij's earlier 2017 show 'Ex-Ante' at Artspace, for which this exhibition is the follow up and conclusion. 'Ex-Post' means 'after the fact', and 'Ex-Ante' means 'before the event'. 'The event' or 'fact' refers to the state of the planet, ie. the precarious balance of life on earth.

The three videos here in Ex-Post are from three of the artists in Remco de Blaaij’s earlier 2017 show Ex-Ante at Artspace, for which this exhibition is the follow up and conclusion. Of these, the Amundsen/Macy work Life on Earth is 13 minutes long, Susan Schuppli’s Ice Cores is 1 hour 16 mins, and Chia-Wei Hsu’s 4 channel Drones, Frosted Bats and the Testimony of the Deceased is chosen by computer from 19 possibilities, each screening between 3 min 40 sec and 8 min 40 secs—due to different assortments of read interviews.

Positioned close to Artspace Aotearoa’s K’ Rd entrance, Amundsen’s Life on Earth is on a large transparent screen so it can be viewed from the other end of the gallery. It features the voice-over of the celebrated author Joanna Macy, author of many books on subjects as diverse as anti-nuclear and environmental activism, global ecology, Buddhism, and general systems theory.

Amundsen’s film looks at the arms race and the apparent rush by the human race towards obliteration. Certainly, at the current historical moment it seems hellbent on planetary wipeout. Life on Earth features shots of the production of US missiles and stealth aircraft. These are accompanied by an extended interview with 92 year old Macy where she discusses the connection of wisdom with compassion when trying to save the earth, pointing out that the danger to planetary life comes not from afar but from within ourselves, from our own choices and relationships. We are shown fascinating aerial shots of curved landscapes from space, and animated excerpts of military flight simulation.

At the other end of the large room we find Chia-Wei Hsu‘s work on four butted-together screens, each in delicate greyish colour. The haunting cinematography focusses on hovering drones, brutalist concrete architecture, advancing bomber formations, roosting bats and spiralling flocks of gulls, with 19 changing brackets that constantly restart so that vital historical information is slowly being presented.

The story centres on Taiwan during World War II, amongst the now deserted buildings of the Hsinchu branch of the Sixth Japanese Naval Fuel Plant (that produced fuel for aircraft), when catastrophic American and Chinese bombing raids began in November 1943. Nineteen witness accounts are included. The title emphasises the death-toll.

Despite the grim subject matter, the nuanced understated colour and the emphasis on movement in open or contained space, make this jigsaw-ish, visually poetic, film installation a treat. The tall concrete boxlike shells of the architecture, the wiggling grey frosted bats snuggled tight in the towering cylindrical chimney, silhouettes of moving bodies in space, the spooky raking light on interior walls, the ominous drones, the horror of the raids: with four enclosing screens there is a lot to absorb in this exceptionally riveting project.

On the right, separated from the long Artspace offices by paper-thin walls, is an intimate viewing space for the Susan Schuppli film which mainly looks at the research of the Canadian Ice Core Laboratory. It takes core samples from deep in Canadian glaciers, snow caps and ice sheets, to extract air from bubbles in the compressed ice in order to examine the climate of up to 80,000 years ago. Gasses like methane and CO2, particles of extra-terrestrial dust, airborne seed and pollen, as well as later humanmade traces like plastic or lead, are all measured. 1300 cores are kept in storage in Alberta.

Two scientists, Dr Martin Sharp (Professor Emeritus CICL) and Dr Alison Criscitiello (Director of CICL) show us the processes of extraction and analysis, without getting too technically obscure. The photography is surprisingly seductive, especially as it focusses more on laboratory equipment, inventories, storage and refrigeration systems than icy arctic vistas.

This last project lifts the mood of de Blaaij’s selection—so that doom and gloom don’t totally dominate. The scientists’ work is fascinatingly clever in its method, its principles easy to grasp, the gist admirably interesting. It is the longest work by far, but not as you might expect, the most visually or sonically arduous.