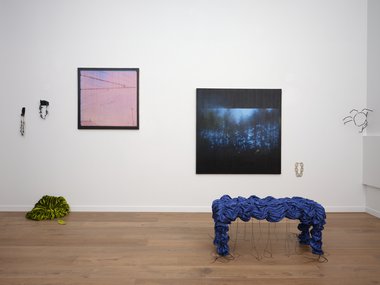 The gallery here mingles ‘applied' arts with the ‘fine', cleverly mixing fashion, body decoration and ‘high art' via painting that alludes to film and fabric, furniture that references garments and surrealism, necklaces that on walls become drawings or relief sculpture—and a hanging system for the latter that exploits glazed ceramics.

Season is the new gallery in the Commercial Bay shopping mall in downtown Auckland Tāmaki Makaurau, organised by Jade Townsend and Francis McWhannell, and Ornamental Friends is their third show.

Emphasising a Māori-Pākeha partnership, and with high street-front visibility (hoping to befriend non-art-crowd shoppers wandering down Lower Albert Street), the gallery here mingles ‘applied’ arts with the ‘fine’, cleverly mixing fashion, body decoration and ‘high art’ via painting that alludes to film and fabric, furniture that references garments and surrealism, necklaces that on walls become drawings or relief sculpture—and a hanging system for the latter that exploits glazed ceramics.

Hamish Coleman‘s four paintings are often surrounded by Moniek Schrijer necklaces hanging off Maia McDonald’s sensitively glazed ceramics, forming enclosed clusters. The linen canvases have a scrubbed worn feel associated with Fomison, but less organic and more like a peelable layer, and although based on film stills, are not narrative or plot based in the conventional sense of ‘action’. Instead they are preoccupied with inanimate objects like clotheslines (with pegs), outdoor car mirrors, and pink-lined curtains. While fetishistic, they also involve the enclosing space as an animating force-avoiding dwelling solely on prosaic items as mysterious living entities.

With the Schrijer jewellery the elements work well as relief sculpture. Particularly Straw Spider which straddles a corner, wittily exploiting the angles of bent brass straws. Or as a flat drawing, as with Golden Arches, which deftly exploits and inverts the double parabolic McDonald’s logo. Many use found objects like spiral-patterned seashells.

Some of them, hanging off single Maia McDonald clay hooks, would have looked better spread apart horizontally—using two hooks. Both artists would have benefitted and McDonald would be less likely to be overshadowed. Which as it is, she tends to be. Even though her bent fired ceramic strips are thick, wide, darkly multi-coloured and glossy.

Lucy Meyle‘s four sculptures are revelatory with their droll humour, unorthodox materials, technical finesse, exuberant confidence, and sublime sensuality. Three are on the floor, one is on a wall.

Covered Bench (Picnic) is a low bench covered with ruched polyester, toggles and cascading threads. Its abundant flabby fabric wrinkles make it look like a headless blue baby rhino, or squat bloodhound with its head down and feet squarely planted. Evergreen scrunchie (accessory for a willow tree) though also on the floor, can be imagined suspended in the air tightly controlling unruly strands of waving willow. Snake’s dress (like a fruit and its skin) is a silver-plated finely-made chain mail reptile’s body or an undulating abandoned sloughed skin, sated with real and fake fruit and even a plastic croissant, a most un-herpetological diet.
Meyle’s fourth work is placed on a wall, a set of filmy pink dinner gloves for a lobster with bulging claws. Delicate and sheer, astonishingly it is made with organza.

Samuel Te Kani‘s commissioned writing is treated with a salient materiality online (white font on black field); or (very differently) when printed with a black sans serif font on brown paper sheets—to be picked up from the front desk. (You can also listen online to it being beautifully read by Francis McWhannell, the curator.) Te Kani is an accomplished artist, brilliant short story writer, VICE video presenter, and journalist (see the latest Metro for his excellent article on the Wairau Māori Art Gallery) but I’m not sure how his fictional text for Season expands the presence of the gallery works, although the protagonist’s deep affection for decorative crockery and trinkets plays a central role.

This is because physically the gallery space is filled with radiant light and is architecturally distinctive with an exceptionally high stud. There is a lot of dry air. Te Kani‘s text in contrast presents a very different imagined space, one that is claustrophobic, dark and damp, rich in aural sensation, and smelling of smoke and lavender, where collectibles belonging to the speaker and their recently departed lover are sited in ‘a dusty pail of strange and forgotten things…(accompanied by)…charmed emissions from my little ornamental friends.’ It dwells on the speaker’s roaming interiority and memory, a perky narcissism that occasionally dwells on traumatic separation and bitter conflicting emotions, caressing for escapist comfort the form of a blue and gold-leaf cup, and then summoning ‘The Other Side’ through a set of Tarot cards. The last card drawn is The Devil, a Major Arcana symbol that critques a fixation on luxury, and warns of being trapped by the material world, sensuality and physical pleasure.

This exhibition is well worth visiting. As personal highlights I found the Lucy Meyle works super-duper fascinating, and the Moniek Schrijer neck ornaments /wall reliefs riveting—though perhaps there are too many. The whole show (as a complete entity) has great flair; a natty group presentation bursting with effective juxtapositions. It really zings!