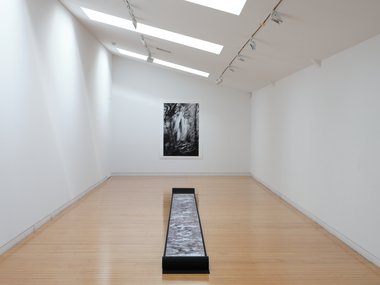 Two sorts of subtly-coloured photographic image are presented by Anne Noble upstairs in Two Rooms: One focusses on the outer (air-infused) appearance of Ratanui, a 500 year old Northern Rata in the Tarapuruhi sanctuary north of Whanganui, a tree that she first photographed in 1978. The other, the subterranean soil quality around it.

Another image laid out on the floor, a long five and a half metre scroll, is a contact print made by burying the unravelled film at night so that it chemically responds to the shovelled earth placed upon it.

Noble is motivated in these tree works by an interest in mysterious ‘languages’ that communicate between botanical organisms, ‘invisible networks of exchange within the forest,’ where ‘as an inherent attribute of all living and non-living things‘ it provides ‘an interconnecting force linking organisms, matter and phenomena within complex environments and systems.’

This is an area where mysticism, science and folklore are claimed to overlap. The five large images are linked to such interpretative possibilities, suggesting arboreal communication via roots and fungi networks.

For this notion, Noble provides an intriguing piece of speculative writing by the renowned author, the late Ursula Le Guin, that postulates that ‘the first geolinguist, who, ignoring the delicate, transient lyrics of the lichen, will read beneath it the still less communicative, still more passive, wholly atemporal, cold, volcanic poetry of the rocks: each one a word spoken, how long ago, by the earth itself...’

Even if you reject such a ‘spiritual’ or ‘interconnected’ reading as fanciful, even if you know what such codes or signals might look like but can’t spot them, these large erotically evocative (via figures or limbs) photographs have a lot to offer. They are more visually subtle than her earlier brilliant bee projects, having greater ambiguity, but worth spending serious time with nonetheless.