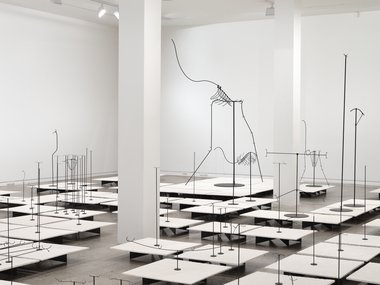 What we see in the gallery is actually not the exhibit, which hypothetically, if not withheld is unavailable. What catches our eye in a dramatic graphic linear fashion, is actually gallery furniture, not art. It is stuff Mitchell envisages the gallery would use to assist putting the 'art material' into our lines of sight, to help us comprehend its function or aspiration. Images we can only imagine.

This installation is an immersive drawing of overlapping curved black lines—short and long—held carefully in place so they in turn can hypothetically support characteristic bones. It points towards the creatures that are now gone, and to the institutions that attempt to acknowledge their development and time on the planet by seeking information to present from bodily traces or the accounts of witnesses.

It presents two taxonomies that overlap: one of linear steel painted black, the other of bones not viewable; one with an implied structure (but not elucidated), the other articulated as written name; one visual, the other linguistic; one ocular and morphic, the other typed in the catalogue; one diagrammatic and pertaining to the shape of avian bodies, the other based on holotypes (described archetypal specimens) and so positioned according to the spatial structure of tabulated Latin names on a chart.

What we see in the gallery is actually not the exhibit, which hypothetically, if not withheld is unavailable. What catches our eye in a dramatic graphic, linear fashion, is actually gallery furniture, not art. It is stuff Mitchell envisages the gallery would use to assist putting the ‘art material’ into our lines of sight, to help us comprehend its function or aspiration. Images we can only imagine. Judging from the show’s title, the armatures are necessary guesswork for displaying bones or fossilised parts that remain here unseen and (overall) partially unknown.

Of course, it is a double game, because these props are attractive visually and highly descriptive. It is impossible to imagine them absent like the unseeable bones they are ‘holding.’ In truth, they are the exhibtion. And they look skeletal. They are witty too.

This work Mitchell sees as commenting on institutions, or lists or publications that contain information. There are also those that do not—another category—to which end Mitchell also presents aural recordings of some recently vanished birdlife. Their calls are sporadically broadcast from a transmitter in the gallery that can be picked up on a portable FM radio-band. We hear aural traces of voices from throats now generically gone, sounds Mitchell clearly puts in a different category from bones or fossilised feathery bodies.

I suspect there is an inconsistency here, if you regard sound as material (and like light involving waves)—but the artist apparently thinks it is not by focussing on ‘containability’ or its absence. That might be because human recording technology and the human ear create a different sort of remnant than visible material like that of bones which have texture and shape. It is a different sort of creaturely trace, as the sound range is selective—determined by the limitations of the human ear—while bones and feathery remains can theoretically be found in their entirety and confirmed by touch co-ordinated with sight.

Without getting caught up in a complicated discussion of Empiricist philosophy (Hume, Locke, and Berkeley etc) and various issues to do with verifiable knowledge (the nature of the world beyond our bodies) and our senses, because Mitchell is not providing say, a long continuous list of names (like in Venice) but positioned unseeable osseous absences, the above paragraph might be the reason he is not transmitting avian vocal absences too, something admitedly also difficult (perhaps impossible) to organise.

He might also argue that I am suggesting a type of deferral, making the sonic recordings a parallel to the black linear armatures; not an equivalent to bones or feathers. He might claim as well that hearing the cries of now extinct birds is an emotional experience far more valuable than some dry philosophical argument involving logic. In fact it can be seen as a form of ‘ressurrection’ with their voices being reactivated through airwaves. Something much more exciting yet tragic.