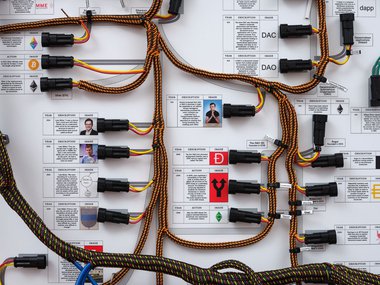 As a collaborative group (involved here with artmaking and curating) Denny and Müller play with metaphors of complex serpentine networking, cultural infusion and layered stacking, as well as dramatically expanding the notions of artistic, commercial, fiscal and technological ‘creation.'

As a collaborative group Denny and Müller play with metaphors of complex serpentine networking, cultural infusion and layered stacking, as well as dramatically expanding the notions of artistic, commercial, fiscal and technological ‘creation.’ On the gallery website, they discuss the rationale of the interconnected works they have positioned in the three exhibiting rooms of the Gus Fisher. There also is an excellent link to the informative wall labels.

In these complicated cross-linked projects (five have been produced in total) the design contribution and conceptual organisation from David Bennewith has been invaluable, as has been on one occasion the influence of Anne E. Guernsey Allen.

Denny and Müller’s exhibiting endeavour emphasises connections galore, densely showcasing various types of historical threads, narratives, initiatives, familial and social links that glue together and drive the art, and of course, initially, the much wider world. It revels in unusual connections and parallels.

Aboriginal artist Dale Harding‘s Digging Stick is a blue spade presented as an extraction tool that can make the hidden visible, a technology that nods to the other side of the domed foyer to a Buck Nin painting (Putahi Incandescent) which shows a cross section of the earth beneath an undulating landscape, and revealing non-human ancestral bodies. Two very different works allude to ocular, physical and mental access beneath the soil.

Niuean artist, Salle Tamatoa, learnt rafia weaving from Tunaga Funaki, his grandmother who also has work (the circular Lapalili fakamanaia mat) in this show. The weaving is a necessary component which he uses to join (or wrap around) his carved wooden sculptures such as those in the Koe Puhala Foou he Talatalai Moe Lalanga series, but while at the same time as he is learning this, he is also gradually absorbing and practising Vagahau, the Niuean language. Different manual, cognitive and verbal skills are acquired together.

Sarah Friend’s colourful print of circular images is a diagram that presents fifty digital entities on the blockchain that have ‘lives’ and require ‘care’-in the form of being passed on—to be sustained. These Lifeforms are ‘mortal’ and so are unsuitable for speculation, but the print shows their distribution, changing ownerships and temporary activity before they ‘expire’. The caption reads: Of these first 50, only 13 are still alive, in the care of 9 accounts which are highlighted in green. Of the dead life forms, 24 died directly after their first caregiver, with no intermediate steps.

In her selection from a suite of prints depicting ominous funeral lilies, and incorporating cursively written texts expressing rage, Leah Jaynes Karp references the high casualty rate of the Atlanta Child Murders where 29 Black children or young people were kidnapped and killed. Two of the titles read: Numbers are growing, and Another Name Gentle asphyxiation.

One of Leah’s sons is Alex Karp (co-founder with Peter Thiel of Palantir technologies and inventor of FALCON facial recognition system) and his portrait can be seen in Denny’s nearby paper sculpture, Document Relief 29 (Palantir Image Identification patent).

Ryan Kuo‘s software program Family Maker is available on a laptop and desk in the central domed gallery—a fitting contribution to a show where social and familial connections have very high profile. Unabashed enthusiasm for such inclusion is the norm throughout, with no traces of irony or self-doubt. There no denying though, with its ubiquitous wit and incredibly complex layering, that this Denny / Müller show is a great exhibition to explore. Exuberantly packed with many different types of intertwined history, it is highly informative, immensely interesting, and loaded (possibly overloaded) with surprises.