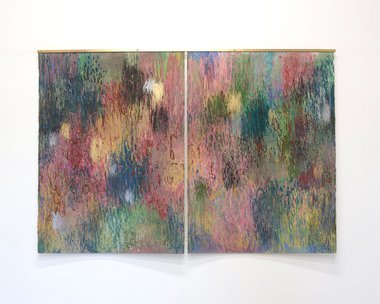 If there was any hesitation about the positive energy emitted by these essentially mark making works, then the titles make it clear what this is all about. Take 'Joy Field—Leaning Into The Shine, Good Feeling Yellow.' No ambiguity here. This work could quite easily be characterized as the visual equivalent of that popular poem Wordsworth penned, the one about golden daffodils “dancing in the breeze”, harbingers of spring, of hope, dispeller of all vacant pensive dispositions.

We have begun to label the ages, and thus far we’ve worn the age of anxiety followed by the age of uncertainty. But perhaps the present day level of apprehension is best served by a word that conjures more than simple unease and mild angst. Call it ‘the age of dread.’

Given such fear and fright, what better way to alter the mood than to surround oneself in an aesthetic corrective which lavishes attention on the upbeat, the positive, the joyous and ebullient. Such experience can be found at Laree Payne’s Gallery, in Hamilton, with the latest exhibition by Sarah Smuts-Kennedy, Leaning Into The Shine, a series of large abstracts using soft pastels on smooth cotton rag.

If there was any hesitation about the positive energy emitted by these essentially mark making works, then the titles make it clear what this is all about. Take Joy Field—Leaning Into The Shine, Good Feeling Yellow. No ambiguity here. This work could quite easily be characterized as the visual equivalent of that popular poem Wordsworth penned, the one about golden daffodils “dancing in the breeze”, harbingers of spring, of hope, dispeller of all vacant pensive dispositions.

The palette Smuts-Kennedy uses is a softer version of Cy Twombly with its dashes, scribbles and hatching marks. They also remind one of Monet in their impressionistic touch, particularly the works from the latter period of the artist’s life when he was going blind, where the subject almost disappears beneath the layered brushstroke.

Joy Field is a torrent of dots, dashes, daubs, a blur of yellow and orange, pastel marks raining down the canvas with spaces of bare white cotton rag left for the work to breathe. Wordsworth would have been delighted.

The marks and colours float, they hover, they dance as they merge, then mingle then separate again. There is a light and airy feel to the composition as well as a certain lusciousness that’s apparent in the forms that blur and smudge. This is a happy painting. They all are.

All of the works are “fields of joy which lean into the shine”, their titles only differentiated by the dates.

The September 2021 work has a more varied colour combination and somewhat heavier striation marks. There are no open canvas areas here for breathing with its blues, greens, oranges, pinks, and creams all crowded and cascading down the picture plane. Think Mark Tobey, or even Jackson Pollock.

These works, though busy, have a more decorative and calming effect. In part they look pastoral, like floral arrangements, albeit retaining a thoroughly abstract configuration. Though essentially flat, they do possess a depth of field created by the overlapping scraped, gouged, notched and scored markings.

Another work, Light Acceptance, August 2022, employs longer pastel strokes which give the appearance of wading through long grass or long-stemmed flowers. It reminds one somewhat of Vincent Ward’s What Dreams May Come, which sees Robin Williams splashing through a delicious and enchanting paint paradise. Here it’s a profusion of purples, creams, blues greens and mauves that provide a landscape of quite discreet rapture. The colours shimmer while creating a kind of hanging lattice work of overlapping vines and trailing plant-like contours, silhouettes and arboreal abstract shapes.

February 18, 2022 presents an even denser version, a diptych with emphasis on pinks and greens. Above these more opaque markings there hovers an assortment of curls and swirls of dark red hieroglyphics—loops, hoops and coils, a calligraphy of notations that float and drift like active trail marks of buzzing insects.

The variations in the mark making is what provides these works with energy, interest and animation; colour that bunches, dots that dangle, lines that leap and rise up before folding back in upon themselves.

Here is nature on fire, a crackling, fizzing, popping blaze, albeit burning but not consuming, like that mysterious flaming bush Moses once stood before.

Looking upon these works, one could easily invoke Wordsworth again when he writes, “And then my heart with pleasure fills”. These are atmospheric pieces providing fields of joy for the viewer, and Smuts-Kennedy, with her repetitive scribbles, scrawls and wild energetic scrubbings, has brought a measure of elation to the table, charming jewel-like creations as antidote to an age preoccupied with doom, catastrophe and dread.