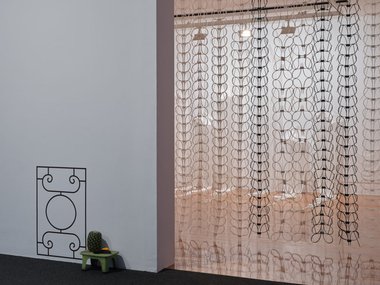 Three New Zealand artists now living in Malmö/Penang, New York and Hong Kong are here organised in a coherent show of installations in Te Tuhi by a curator who used be based in Auckland—and then Singapore—but who is now residing in London. Consequently, curator Vera Mey‘s title alludes to a spritely aphorism found in the ancient Indian (and ginormous) Mahabharata  saga: “What is here is elsewhere. What is not here is nowhere else.”

Note that her title is a compression of two opposite (exclusive) zones of focus found within—but not a correlation of—the above portion. That portion in the essay’s context ponders the nature of comparing the local with the international; looking at similarity and difference, dissolving their distinctions (in terms of parallel histories as well as spread-out geographies), and with her exhibition placing these questions within the current global crisis of COVID and Aotearoa’s brain drain.

When we look at it, there is the question of the basic premise of the quotation (not the title) being opposed to the notion of cultural identity and putatively distinctive differences, embracing instead a ubiquitous blanketing sameness? If so, that is an interesting unexpected surprise in today’s popular climate of identity politics.

Four distinct sensibilities coalesce (curator included; with her essay) in this exhibition: three shows clustered together—each with its own metaphorical focus. The three artists weave together similarities and differences linking the ‘here’ of Pakuranga with the ‘there’ of their respective ‘home’ cities, where Mey’s concept provides a kind of skeletal semantic loom.

Kah Bee Chow‘s installation explores questions of decoration and functionality, using the same wrought iron scroll motif for both wall ornamentation and double-ended hooks (but round in cross-section) for the suspension from the ceiling of drying clothing or bags of food. All this while possibly obliquely commenting on meaning and how it becomes attached to art objects, words, or complex concepts.

The wall friezes seem to allude to a number of sources. When flat in cross-section to form continuous rectangular patterns on the lower walls, they could speak of artworld cross-influencing as well as decorative Strait building facades in Penang.

Other linear formations, when in isolation, such as empty circles held in suspension via scrolls, seemingly reflect human society in harmony between heaven and earth. They (in a more figurative variation) appear to come from burnt tortoise shell divination methodology with the motifs put on the exhibition’s double glass-door entrance.

Li Ming Hu likes to dress up and perform, playing with the presented surfaces of celebrity-selves. Her videoed personas (singing Boney M disco hits, being interviewed as a showbiz star, wearing cardboard masks or make-up and wigs) are more than simple karaoke, having a carnivalesque sting to them (critiquing the entertainment industry), and not merely having fun through emulation or fantasising about stardom.

Presenting a series of linked up installations (such as a dressing room with sharp anti-break-in needles around the window, and fake studios), they also incorporate—via a business consultant—a preoccupation with art careerism and its driving aspirations and strategies. The many props include a faux fur camera and laptop, celebrity masks, courier receipts, drawings—and assorted accessories of cosmetics, clothing and wigs.

The work has a love/hate ambivalence, a sour underpinning bubbling-under resentment about the risks of careerism, be that for an artist or showbiz entertainer. It’s a two-fold tension that wonders about the sacrifices being made.

Yuk King Tan‘s presentation focusses on the repressive political climate in Hong Kong and the activities of the Yellow Umbrella pro-democracy movement. Her installation is in two parts: floor to ceiling screens of linked up cable tie police handcuffs (a kind of mesh), and on the wall a suite of eight geometric mountains made of cardboard, glue and long cascading white string, flowing like a liquid down the wall and over the floor. Though you only count eight mountains merging with the white wall, the title says ‘nine’. Some of these configurations have several peaks, adding to the complexity, and perhaps the ninth mountain is invisible.

The mountains are symbols of permanence and tradition, and their height places them close to the gods, yet the falling string refers to flowing water and perhaps the changing geological formations within each mountain it creates through erosion. Those changes reflect human society and its changing structures, whilst linking heaven and earth.

The suspended screens of handcuffs represent in bulk, police control of arrested prisoners, but looking through the airy web of plastic cable ties you can also imagine a future beyond, perhaps one with a more democratic government and fairer laws.