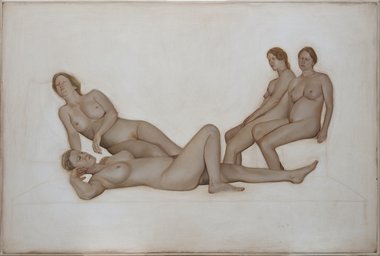 You may have seen and read Glen Snow's observant and very thorough essay published last March on Mason's pale beige (chromatically understated) works when presented at Window. So now with this Roger show we have more paintings. Her images can be seen in contra-distinction to an online suite of John Currin 'Memorial' paintings shown in New York of big breasted (tiny footed) impassively-faced women in explicit orgiastic poses that appear to be carved in white marble in the relief method of Canova.

Mason’s exhibition title comes from James Joyce’s character Stephen Dedalus in A Portrait of the Artist as a Young Man, as in Chapter V he ponders the teachings of St Thomas Aquinas (a founding Catholic theologian), and explains to his friend Lynch how when we perceive art, beauty comes from a blending of wholeness, harmony and radiance (in Latin: pulcritudinem from integritas, consonantia, and claritas.)

One might be tempted to make claims that the ‘wholeness’ of Mason’s title is close to ‘wholesomeness’, for the mention of harmony and radiance seems to push it in that direction—if one chooses such a literal misreading.

Or is it simply a mantra for a healthy existence, a bit of pragmatic advice, for with Mason’s images the implication goes beyond the beauty of a looked upon artwork. It hints at the potential success of a lived life, the happiness of an individual. Perhaps that of a child to be born, or a woman about to become a mother.

Deep in sleepy repose, or awake resting with eyes closed, these unclothed women display their nakedness and sometimes pregnancy—revelling in interiority and an invisible maternal reverie. There is no hint of sexualisation.

Some of Mason’s images seem halfway between painting and drawing: the lack of deep shadow, or bright colour—and locked into pictorial space with a dynamic tension created by negative spaces on the white unpainted canvas. Sometimes the same model is used several times in the one image to generate a lively composition.

Made through the use of thin translucent layers of oil paint on striated gessoed canvas, they have the delicacy of watercolours. They are not overtly linear as with say, drawn pencil marks made by Ingres, but effortlessly explore corporeal illusionism via mass and planar surface, using a modelled plasticity with only bare contextual hints rendered of the supporting furniture.

You may have seen and read Glen Snow’s observant and very thorough essay published last March on one of Mason’s pale beige (chromatically understated) works (also here) when presented at Window. So now with this Roger show we have more paintings. Some like Abigail Supine seem to reference Holbein the Younger’s 500 year old Body of the Dead Christ in the Tomb. Overall,  Mason’s images can be seen in political contra-distinction to an online suite of John Currin Memorial paintings shown in New York of big breasted (tiny footed) impassively-faced women in explicit orgiastic poses that appear to be carved in white marble in the relief method of Antonio Canova. Some have called Currin a ‘Caligula’ who paints ‘idols of perversity.’

In this conversational act of comparison, I don’t want to repeat Snow’s superbly articulated commentary with its occasional discussion of epidermal chromatic nuances. Instead, I want only to point out Currin‘s mischievous, comical and pornographic work as antithetical in sensibility and gender politics to Mason’s which—in its title, and use of Aquinas—is earnest in its interest in female beauty and fecundity, and deeply Catholic.

It also looks ‘French’ and unabashedly old fashioned and, fitting in with the conservative zeitgeist of our times (with its rejection of irony), is exactly so—embracing neo-traditional and conventional methods of visual representation to promote a family ethos, and rejecting any boomer ideologies of innovation, provocation and radicality. Work with a very different feel from her earlier photographs.