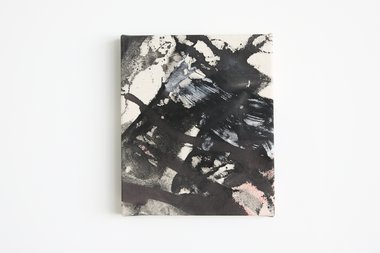 The staining technique has also been used by other artists, but the difference with Watson is that she allows the shapes of nature itself to determine, to a larger extent, the shapes of her marks, smears, spots and smudges. The studio touch-ups that follow are partly influenced by photographic images the artist takes of the places she visits. The results are wholly abstract, the outcome of taking what might be regarded as an unprepossessing part of a ‘landscape'—complete with sticks, leaves and branches.

Just when you thought every trick and trope had been tried, every technique and turn exhausted in the game of art—at least in the painting game—along comes an artist who surprises us with a new stratagem in the creative process. Amanda Watson is a landscape painter; but with a difference. If you’re looking for the conventionally beautiful, the orthodox picturesque, the standard sublime, look elsewhere.

These are ‘paintings’ born en plein air in the most literal of senses, but with the least literal of outcomes (in terms of landscape tradition). What Watson does is take her raw canvas out into the field, or in her case out to locations she has a real historic connection to (Raglan in this case), and simply lay the un-stretched raw canvas on the ground, or crunched up around trees and vegetation. She then pours black ink over them and leaves them there for several hours to dry. After retrieving them, she straightens them out back in the studio, adds some final flourishes, and the result is an immediate abstraction in monochrome with the verbatim imprint of nature—leaves, sticks, wetness of dribbled ink, blotches, etc.

In this sense, Watson is as close as you can come to an automatist, something others have certainly tried, particularly the Surrealists who were adept at inventing ways to reduce and minimize rational control over their creations. Miro would sometimes splatter his canvas as a point of departure, and of course, the great exemplar of such practice would be Pollock. But Watson has taken the process a stage further, and the results are impressive. What she ends up with is an amalgam of mark making techniques, frottage included, that reaches back through the history of abstraction, but comes with an extra added leap. Of course, there are failures and these are relegated to the bin, but it takes the eye of an artist to weed out the wheat from the chaff.

Underlying her romance with nature are the writings and thoughts of two contemporary philosophers: Jane Bennett and Donna Haraway. Both women espouse a kind of ecofeminism, with Bennett in particular drawing on sources as diverse as the American poet, Walt Whitman, vitalist theorist Henri Bergson, religious pantheist Baruch Spinoza and transcendentalist nature lover, Henry David Thoreau. At core these thinkers argue for a kind of vibrancy of matter, pushing back against a purely mechanistic explanation for elements organic and inorganic.

Watson is attracted to the idea of nature in harmonic resonance with things. She attempts to capture its beating heart by a kind of osmosis, through the spreading out of her canvases across and around her subjects in the most intimate of ways.

The staining technique has also been used by other artists, notably Gretchen Albrecht and Helen Frankenthaler, but the difference with Watson is that she allows the shapes of nature itself to determine, to a larger extent, the shapes of her marks, smears, spots and smudges. The studio touch-ups that follow are partly influenced by photographic images the artist takes of the places she visits. The results are wholly abstract, the outcome of taking what might be regarded as an unprepossessing part of a ‘landscape’—complete with sticks, leaves and branches. By a simple act of pressure and application of ink, she transforms the ‘banal’ into an aesthetic delight.

Her minimalist noir palette and the expansive notations sometimes vaguely recall the work of American abstract expressionist, Franz Kline. However, with her medium involving soaked stains, the work Watson delivers is quieter and softer, without the bravado of the wild gestural swish of the loaded paint brush. Nevertheless, they do possess a drama of their own, as the dark sprawling forms intersect, clash, converge and spring off in a dozen different directions.

There is chaos and control at work here. Accident and deliberation butt up against design in a fertile and energetic way. Nature is made to reveal itself imprinted on the canvas as if some giant screen-printer were at work. It is a unique process and Watson, with judicious manipulation and handling, is able to produce bold striking images. Some pieces in Local Geo-Graphies, remind one of ancient cave paintings in their configuration and form, with dark brooding lines and hints of subtle ochre shades and hues.

In Ramp there is also a short instructive video that documents Watson as she engages in her art making processes. This is well worth visiting to both witness the method and to appreciate the finished product.