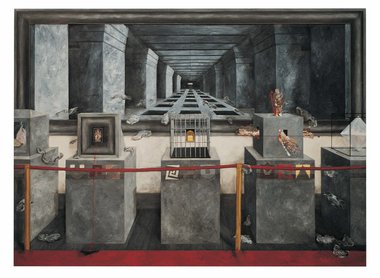 As you might expect, all these multiple projects are somehow interconnected: some older themes examined; various tangential interests pulled in and expanded; other apparently unrelated preoccupations revealing surprisingly unanticipated materials, formal structures, conceptual links or narrative overlaps. Plus her humour is very evident: especially with the later smaller paintings about speech.

It is now sixteen years since the magnificent Julia Morison survey, a loop around a loop--a cluster of ten plus one exhibitions curated by Justin Paton and Felicity Milburn—was presented in the municipal art institutions of Christchurch and Dunedin. (Astonishingly, it never toured to North Island venues, but possibly key collector-owners were reluctant to extend loans.)

In that massive exhibition we saw the typical Morison trademarks of Kabbalistic organising structures, use of ten symbolic (often bodily) substances, and for ideational content, ‘corporate’ modernist logos that could be interlocked in pairs—all synthesised into striking (but each highly individual) projects.

This current Trish Clark show is a display of some of the unsold (but still remarkable) pieces from dealer presentations linked to that earlier project, mingled with highlights (In Hindsight) from other exhibitions since.

Many of those exhibitions involved not only painting but sculpture. Included here in this sampler are forty-three such three-dimensional items of varying size; some freestanding or suspended, others on plinths, shelves, or walls. Some too showing Morison‘s inventive use of solidified sludge made from recycled supermarket bags mixed with liquefaction from the catastrophic Christchurch earthquake.

As you might expect, all these multiple projects are somehow interconnected: some older themes examined; various tangential interests pulled in and expanded; other apparently unrelated preoccupations revealing surprisingly unanticipated materials, formal structures, conceptual links or narrative overlaps. Plus her humour is very evident: especially with the later smaller paintings about speech.

Two stand-out works from the original survey are the two intricate cyber-corporeal paintings from Gobsmack and Flabbergast, 2005; and three parts of Gargantua’s Petticoat, 2006 which presented spectacular linear arabesques resulting from drawing software. Of the shows represented since the survey, particularly distinctive are the fourteen presented Centrefold works (2000) with their Rorschach-like inky stains and sweeping loops (first shown in the Second Auckland Triennial), and the sculptures using birdcages, an ironing-board, a stool, and recycled plastic bags and liquefaction of Meet Me on the Other Side, 2011, shown at Two Rooms.

Clark’s venue is cleverly used to allow Morison get the most of the space, so that the works benefit. In the middle room for example, Eternity, 1989, the hefty Magritte-influenced, glyph-loaded painting, leans against the wall, optically tunnelling through it but with a painted velvet museum rope barring ‘bodily’ entry through the picture plane, and a small delicate birdcage painting physically inserted into a larger painted cage in its centre.

Aptly two surrealist sculptures featuring birdcages are positioned in real space on the opposite side, along with a freestanding stool bearing a frayed and disgusting ET head of plasticky, pooey sludge, poised to strike like a cobra, and an ironing board featuring on top a snapped-off phallic stalagmite made of resin, a suspended stalactite below, and a hovering breast made of a sieve. On another side, we see ten Edicts, 1998, declamatory moralising tablets about prohibitions unspecific—but made in symbolic materials-that like Eternity are leaning on a wall, but under a window.

Precise positioning is also obvious in the gallery’s front room with its reception office and street-side windows. Three canvases (Flipside, 2015) with pale grey, bulbous, tuberlike forms, drawn over with ink—accompanied by parallel stripes of silver metallic paint—are positioned on the wall opposite the windows, so that the racetrack silver bands suddenly decrease in tone as you move past, or in the other direction, rapidly glowing with bursts of incandescent illumination, and even acquiring subtle reflected colour.