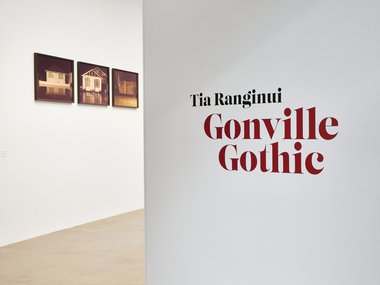 On the gallery walls the works are kept in series and carefully organised to be visually balanced by Leonard, but after finding cross connections that straddle the floor, you can mentally make your own sequences and juxtapositions—enjoying new bridging links that jump between the images.

While three self contained works are included here, most of the photographs fit into three different series: Suburban Melancholy (2015); Tua o Tāwauwau / Away with the Fairies (2020-22); and The Intellectual Wealth of a Savage Mind (2015).

Compositionally Ranginui favours frontality and a tendency for symmetry. No oblique angles; a fondness for ground level; no disposition towards aerial shots; a love of tonally retrained pattern; and an aptitude for loaded detail that mysteriously reveals itself on close-quarters inspection.

Analysing thus doesn’t really explain how this artist achieves what she does, creating a haunting sensibility that seems to be a hybrid potpourri of photographers as disparate as Thornley, Clarke, Todd, Eggleston, Casebere, Webb and Neshat. She nods in all directions but still confidently exudes a distinctive, almost hallucinatory, style through the co-ordination of cleverly chosen sites, props and people.

On the gallery walls the works are kept in series and carefully organised to be visually balanced by Leonard, but after finding cross connections that straddle the floor, you can mentally make your own sequences and juxtapositions—enjoying new bridging links that jump between the images. We can create our own filmic fables or morality tales.

I particularly like the following six ‘immersive’ works featuring water, vapour, and partially hidden faces, pale bodies and Pūriri Moths. I’ve sequenced them like this:

Billow (a young longhaired woman submerged in a pool is blowing vape steam out through a hole in the water’s surface-tension skin. Like a geyser lurking under a crusty muddy landscape.)

Ghost Moth (a very similar young girl lies on her back with large green moths entangled in her long blonde hair. Are the moths ominous omens?)

Niflheim (a Norwegian doubling as a male patupaiarehe suns himself on a rumpled towel, being strangely covered with mist but also exposing a moth tattooed on one leg.)

Sleipnir (the same Norseman is sitting in a Mustang convertible, revving it up and looking for female company. The car is stolen.)

Stolen (the Norwegian / Pākeha male driver and a Māori female companion are semi-hidden in mist. They are sitting in the same Mustang GT, and are difficult to see behind its dark murky windscreen. It is also difficult for them to see out.)

Pokokohua (In the mist above a table we notice the barely detectable head of an apparently decapitated woman sitting on a dinner plate—she might have previously been in the Mustang. Maybe she is a ghost; maybe this is in a morgue.)

Loaded with exceptionally evocative, beautifully constructed, ambiguous images, this is a show not to be missed.