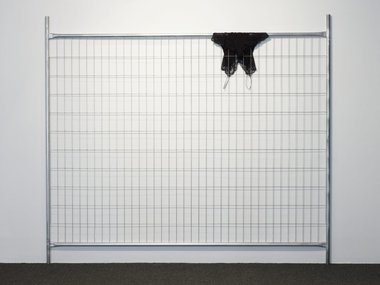 Mitch and his Mokopōpaki colleagues have set up a wild but elegant show that looks amazing with its pieces of checkerboard flooring and impeccably positioned panel-stencil-sprayed computer side panels, fetishized dark glass and b/w aluminium cases, rows of hard drive platters, and clusters of clinging chrome-plated ball bearings, clips and magnets. Though very ordered, the whole thing reeks of constrained delirium.

In this spectacular, cleverly organised exhibition by Mokopōpaki we have several artists sporadically participating alongside Roman Mitch, but Mitch’s own sensibility (a dense mix of Duchampian referencing, a love of the mechanical innards, workings and outer cases of HDD and SSD technology, and use of Māori concepts) absolutely dominates. The gallery space where many of these works were first exhibited was ludicrously narrow, so being presented here in Pakuranga achieves a major transformation.

The show, with about thirty items, is rich in Duchampian allusion, and fun because of that: Wedge of Chastity, Trap, The Large Glass, Bachelors and Sieves, Rotoreliefs, “Fresh Widow”, Why Not Sneeze Rose Sélavy, Bicycle Wheel, Dust Breeding, Chocolate Grinder #2, Faulty Landscape, Given: 1 The Waterfall 2.The Illuminating Gas, A Glider Containing a Water Mill in Neighbouring Metals, Nine Malic Moulds, Three Standard Stoppages, Duchamp Playing Chess with a Nude (Eve Babitz). There are dozens of references. They never seem to end.

Plus, besides Duchamp’s Wedges, Yllwbro’s row of doorstops might also refer to Man Ray’s Gift—the iron with a vertical line of nasty carpet tacks down its centre. Or Mitch’s Zero Gravitas, with its suspended Miss Crabb Rise dress and attracted electroplated clusters, is possibly also a reference to Marcel Broodthaers’ Maria, with its black coat and egg-covered bag.

My favourite work is Rangitauninihi’s The Discipline of Choosing, a large section of gridded steel fence languidly leaning against the wall with a saucy black slip flung over the top. It seems to be feeding on Mokopōpaki’s textual contribution interviewing the artist about her very focussed choice in clothing, while also drawing in “Fresh Widow,” and Why Not Sneeze Rose Sélavy, the birdcage, marble and cuttlefish work.

Mitch and his Mokopōpaki colleagues have set up a considered, elegant show that looks amazing with its pieces of checkerboard flooring and impeccably positioned panel-stencil-sprayed computer side panels, fetishized dark glass and b/w aluminium cases, a row of hard drive platters, a row of door wedges, and clusters of clinging chrome-plated ball bearings, clips and magnets. Though very ordered, the whole thing reeks of constrained delirium.

Mitch’s own suspended curtain of LED lights appears to reference the Illuminating Gas and the Waterfall, while his sprayed on electroplated and abraded side panels present an overt link to The Chocolate Grinder. While these days computers are regularly commented on as enabling compulsive onanistic practices, I’m not sure that is quite Mitch’s point—though it probably is. It looks like, as with Duchamp, an allegory about art (the bride) and her desiring ‘bachelor’ viewers.

This sprawling (in parts self-conscious and fiddly) Te Tuhi show is a bit unwieldy, but because it is extremely rich in art historical, conceptual and visual interconnections—and dynamically an optical treat, despite being in thrall to Duchamp—it rewards exploration. If I were curator I wouldn’t have included Mitch’s Art Store Drawings, or the works by Penelope Sue or Marcel Tautahi and Ngaroma Natalia, but I can see formally why they are mixed in. And if I were a fluent speaker of Māori or an expert on the finer science underpinning electro-mechanical data storage, I might determine if there is an important dimension or trope to many of the work titles I have not hitherto grasped—perhaps cross-cultural puns.

Whatever the case, the exhibition’s infectious formal exuberance and distinctive conceptual intricacy make it a compelling experience for any curious visitor. A physically and mentally engaging installation.