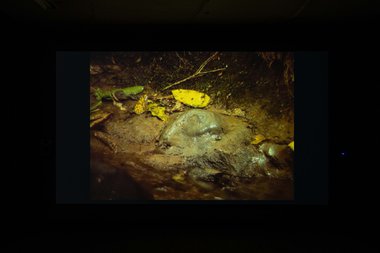 Because I personally like the notion of artists being independent thinkers, who do not always obligingly stick to the community narratives at times proposed by curators—even if they are happy to be commissioned—I was curious to see how this played out in the movies and texts, especially as some artists don’t relate creatively to their families or immediate social environs, connecting elsewhere.

This Circuit organised programme features five varied short films (two with animation) that run in total for less than fifty minutes, so it is a comparatively accessible project that looks at cultural and historic legacies as the chosen NZ and Thai artists view them: both positive and negative aspects. It is a stimulating concoction that the selector, Thai curator, May Adadol Ingawanij, has devised, and it tours with a natty little book with commentaries from three writers.

Because I personally like the notion of artists being independent thinkers, who do not always obligingly stick to the community narratives at times proposed by curators-even if they are happy to be commissioned—I was curious to see how this played out in the movies and texts, especially as some artists don’t relate creatively to their families or immediate social environs, connecting elsewhere. The term ‘legacies’ can include all kinds of community traditions in terms of thinking, writing, art media and recreational practices, where the connecting components are less obvious and spatially and temporally spread apart.

I was pleased to see this acknowledged in Garden of Clay, Martin Sagadin‘s film about their friend, the Banks Peninsula potter Caitlin Clarke, who talks about and demonstrates her working processes, but starts also by discussing, with a photograph scrapbook and family tree, her family being coalminers in Greymouth, some of whom died in the Brunner mine disaster of 1896. Most of the film is preoccupied with her scraping clay from a creek bank, making a pinch pot, looking at the effects of sunlight on her glazed endeavours, and burying an earlier finished pot in the bank where she took clay out-a symbolic act of thanks and a gesture of compensation. The swollen, smoothed-over earth surface looks remarkably gravid.

Sagadin is a New Zealander of Slovenian background, and their cinematography occasionally emphasises silver light on rushing water and glistening rocks, or warmer sunlit illumination of the walls of her studio. It shows an elementalism, beholden I thought to other filmmakers like Tarkovsky, Sokurov, or early Vincent Ward. However I notice in their published artist’s statement and other writings, they speak of the Baltic poetic documentary tradition that includes Stonys, Bartas and Loznitsa, so obviously that’s the very specific legacy they feel affiliated with—in the way they frame their shots and pick their content. Fascinating because it is a very northern European sensibility.

Thai filmmaker Ukrit Da-nguanhai uses American anti-Communist propaganda films to demonstrate part of the history of the cinematic experience in Thailand, showing how counterinsurgency movies about the ‘Community Development Officer’ were shown in village huts during the evenings, a new thing for most of the audience. In Trip After there are wonderful views shot from the top of a truck cab as the road passes through the open rural landscape, meeting farmers with herds of water buffalo and occasionally riders of motor scooters. Sometimes the images of the screened American films are blurred with double exposure so that groups harvesting paddocks seem to be reaping fields of lotuses.

Edith Amituanai‘s film is about the achievements of her friend, Epifania, who as a child should have attended school at primary and intermediate age, but because her parents were working, looked after her many younger siblings at home. Later her parents split up (her mother then remarried and her father committed suicide) and so to prevent her brothers and sisters being sent into assorted foster homes, adopted them herself, becoming head of the family and taking on a matriarch’s responsibilities. Her guidance and love are seen by her charges as nurturing roses growing out of cracks in the concrete.

Sriwhana Spong‘s coloured animated film, And the creeper keeps on searching for the flame tree, was inspired by a painting of I Gusti Made Rundu (her grandfather) containing an image of a swarm of bees, while also possibly being ‘a tip of the hat’ to Sorawit Songsataya. Representing a constantly morphing “accumulation of energy ‘charged with potentiality’” set against a gradual descending of the sun into the sea, and the artist’s verse by verse recital of a poem ‘There is a forest hermitage on top of a little hill‘, the black bees change into different murmurations and insects. They suggest the artist’s volatile feelings towards her departed relative via what seems to be a shimmering cloud of fireflies, or what she calls a ‘scourge of mosquitoes’ and ‘an eclipse of moths’.

A very satisfying mixture, these openly emotional films present a wide ranging but complex suite of responses to the chosen theme. Nicely unpredictable.