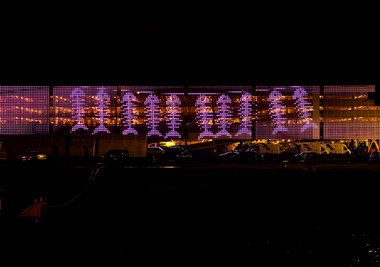 While the energy, chromatic sensuality and conceptual depth of Songsataya's project is absolutely engrossing, what are we to make of the artist's title? The partial dissolution of individual bodies occurs within each shoal, but the ascension to the ‘water surface' implies perhaps a higher (no facile pun intended) goal. A permanent more total release.

Just along the east end of Quay St, to the right of Parekowhai’s wonderful Lighthouse and on the massive screen-covered wall of the Ports of Auckland building, Sorawit Songsataya’s brilliant digital film, Come Up For Air, explores similar themes to those of his 2018 Starling  exhibition at Artspace.

That show looked at multiple bodies guided by a single mind (such as swarms of social insects or thousands of co-ordinated starlings in murmuration), but this one seems influenced also by Buddhism with its themes of incessant reincarnation and immense scales of time, and the aging (inevitably decaying) body within each life.

One is fish skeletons, de-fleshed bones moving swiftly along a horizontal rail like swinging carcasses in a freezing works chain. There are ten or twelve of these lurching images, methodically approaching the centre from either the left or righthand sides.

The other is swirling shoals of many bird-like fish—coloured red, blue, green or yellow-moving within huge mauve or ochre fields where there are gently pulsing ribbons of dark smoke, contracting and expanding. The throbbing lines seem part of a cosmic being, a grander (but totally impersonal) over-riding process. There are subtle overtones of Stanley Kubrick’s 2001: A Space Odyssey.

The flickering shoals move back and forth frenetically, unpredictably moving off in diagonal directions or suddenly dropping vertically, suddenly to be replaced by more (looped) sliding rows of piscine skeletons.

While the energy, chromatic sensuality and conceptual depth of Songsataya’s project is absolutely engrossing, what are we to make of the artist’s title? The temporary dissolution of individual bodies—the partial dissolving of monads—occurs within each shoal, but the ascension to the ‘water surface’ implies perhaps a higher (no facile pun intended) goal. A permanent more total release.

This is a truly wonderful project to contemplate on a warm summer’s evening but on occasion its panoramic vistas are blocked by moored container ships and council roadworks, so you need to be adventurous, inventive and determined to find a good position (preferably near the carpark opposite). Also the later you look at it, the more likely the distracting office lights on the horizontal  building floors are to be turned off. To say it is well worth it is an absolute understatement.