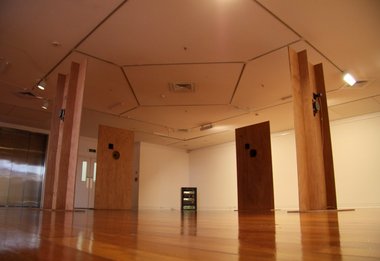 With Hansen and Thomson, for all their abstracting interventions and love of the materiality of sound, there are still plenty of associations to do with for example, swirling water, passing trains, murmuring bees, lowing cattle, shuffling furniture and echoey footsteps. However despite all this they are not as overtly landscapey as say seventies icons Brian Eno or Wendy Carlos. They are closer to Richard Francis. Somewhere between ‘rural-pastoral' and ‘urban-industrial'.

This sonic installation in Dunedin, a collaboration between Massey and AUT lecturers Eugene Hansen and Andy Thomson, involves treated aural recordings that have been accumulated from locations all round the world. These have then been sonically inserted into a gallery space via four large vertical plywood sheets holding old fashioned radio speakers. In the space is also a glossy black steel and glass vitrine holding an intricate stack of valve amplifiers and mixing equipment.

Fieldwork is a bit misleading as a title as it implies a preproduction purity and these layered and transmuting aural textures are definitely digitally treated and inserted as short hypnotic loops that then play as a long sequence for about 38 minutes. It is an abrasive industrial ambience but one that is slightly muffled in its rumblings - not piercing. Nor is it tuneful or sweet. Instead with its various changing patterns and reverb, and shifting orientations, it is mesmerisingly hypnotic, a pinch ghostly, and slightly lyrical.

This sort of aural work is not as extreme as say that of Richard Francis, the Auckland sound artist. Here there is mostly a groove, a caressing rhythm that Francis, for one, seems to studiously avoid with his love of crackles, crumpled crunchings and statically inclined aural disintegrations. Francis’s sound has overtones of vandalised packaging and crushed substances but with Hansen and Thomson, for all their abstracting interventions and love of the materiality of sound, there are still plenty of associations to do with for example, swirling water, passing trains, murmuring bees, lowing cattle, shuffling furniture and echoey footsteps. However despite all this they are not as overtly landscapey as say seventies icons Brian Eno or Wendy Carlos. They are closer to Francis. Somewhere between ‘rural-pastoral’ and ‘urban-industrial’. Nevertheless I think they also relate to the Lilburn electronica tradtion in their landscapish feel.

One thing Mark Amery mentions in an up-and-coming review of a show at Enjoy (it appears Monday), exhibitions like this - that expect of their audiences prolonged reading, video viewing, or concentrated listening - should provide temporary seating. Otherwise the attitude conveyed is that of user-hostility: ‘make your visitor suffer (they should be grateful), and too bad if they never return!’ This is perpetuated by a belief that the space must look good at all times, therefore the comforts of furniture must be banned.

That issue aside, the audio work is more complicated than what it at first seems. The mix continually changes, not only in spatial positioning within the room but also in the manipulation of bass/treble and timbre, the degree of regular versus random elements, the pace of the dominant pulse, the volume level, and the density of contributing components.

Hansen and Thomson’s flat plywood panels holding up the speakers look like facades or props from a sci/fi or futuristic film set. Their towering thinness brings an appealingly incongruous, if not amusing, architectural visual component to a presentation that with Dunedin’s history of experimental recorded and live music, should attract an appreciative audience.