Looking at Koru and Kowhaiwhai 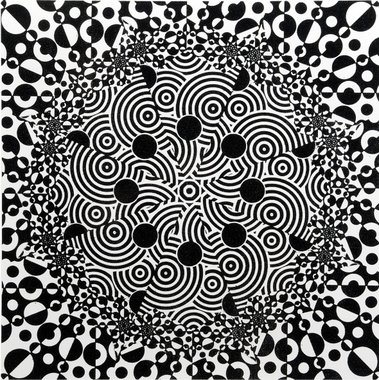 Gordon Walters of course was one of the first to take Maori motifs and the western European abstract tradition and fuse them together into a new amalgam. That audacious move has seen the birth of many wonderful marriages since of the old and new from Maori artists themselves, some pushing yet further the composite construction into fertile imaginative couplings.

As with all contemporary Maori art that aspires to be modern but has as its springboard traditional Maori motifs, the trick is in the translation, how well those older elements are transcribed into a modern idiom.

What one tends to find in older Maori artists is a reluctance to stray too far from the source, and thus the work ends with what simply becomes a kind of cosmetic makeover of ancestral forms. Prime examples of this approach include the work of Sandy Adsett, Buck Nin, Paratene Matchitt, Mike Crawford and James Ormsby. Koru and kowhaiwhai patterns abound, albeit in slightly novel ways, but the remodelling is often not more than a facelift involving new colours and a slight reconstruction of forms; a reverential approach, the results of which sometimes reach no further than well worked seventh form folio pieces, decorative and pleasant but little else.

A younger generation of Maori artists have been bolder, more adventurous, seeking to go beyond the fixed and customary configurations, to try the neoteric, to renovate at a more experimental level.

Pre-eminent among those in this exhibition, is Shane Cotton. Since 1993, he, along with fellow compatriots, Peter Robinson and Michael Parekowhai, has done more to reinvent and overhaul contemporary Maori art than any other. His constant innovation is all the more striking given the singularity of his focus, that is, the limited range of his subject matter; reworking the same old postcolonial concerns over and over. It has seen him evolve, generate and ingeniously reconceive his forms over almost two decades so that each new series comes out fresh and invigorated. The work on show; Smashed Myth (Half-Cast #15) 2011, a unique screen print and paint piece, presents a more strident and aggressive tone than is normally the case with his former works, recalling the early work of Peter Robinson.

Others in the show that move beyond surface retouching, morphing their models beyond duplication, are Gina Matchitt, Peata Larkin, Saffron Te Ratana, John Walsh and Kura te Waru Rewiri. The most original and ground-breaking of the above group, is Gina Matchitt’s Patikitiki 1 & 11, 2010 with her use of found objects in the Dadaist mould; computer keys, black and white, arranged to create the distinctive kowhaiwhai pattern. The links with language, technology, clash of race and culture are cleverly articulated with a minimalist of means.

Another who borrows from European historical art sources is Emily Karaka. Her Folds-wai 30, 1995, co-opts the expressionist school - for example, Philip Clairmont and others - with varying degrees of success. It has a somewhat dated look, the more-is-more approach not always the best recipe to articulate her subject, this being the historical Maori figure, Rua Kenana. He is also examined by Dion Hitchens and Donn Ratana, the latter doing something that echoes Pat Hanly. Reuben Paterson’s Naturist, 2005, a glitterdust screenprint that is a kaleidoscopic op art creation, moves to the outer edge of that link with Maori design and ornamentation, while Saffronn Te Ratana uses pure abstract patterns, as does Peata Larkin.

Gordon Walters of course was one of the first to take Maori motifs and the western European abstract tradition and fuse them together into a new amalgam, back in the sixties. That audacious move (controversial in some quarters - and probably explaining his exclusion here) has seen the birth of many wonderful marriages since of the old and new from Maori artists themselves, some - and exhibited in this show - pushing yet further the composite construction into fertile imaginative couplings.

One Pakeha artist is included in the show, Robert Ellis, a work on paper from 1963. It references his focus on urban cityscapes and his quintessential birds-eye view, with a hint of archaeological/historic deposits.

This exhibition, drawn from the Waikato University collection, is a small snapshot that explores the definition of what Maori art is and can be. The interplay between Maori and European styles, at their best, at their most creative, can produce hybrids and skilful ‘half-casts’ that speak tellingly to all here in the South Pacific.