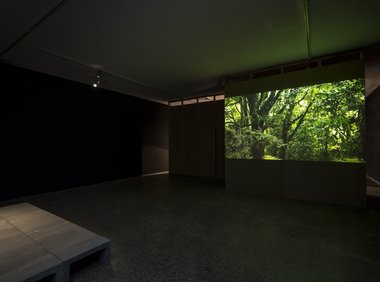 Although this is a clearly clever installation, with its measured corridors, overtly panelbased walls, precise lighting and palpably emotional content, for me the film within it is a special treat, especially Frengley's camerawork under Western's instructions. It has a tight organisational structure that would let it be appreciated in a non-installational, non-architectural context.

Blaine Western
The Fold of the Land

This carefully devised, multileveled, video and sculpture installation by Iris Fisher award winner, Blaine Western, focusses on seventies modernist architect John Scott and his highly regarded Aniwaniwa Visitor Centre (1974) in the Urewera National Park. Showing the influence of Frank Lloyd Wright in its relationship to the bush and landscape, Scott’s innovative building is videoed closed and falling into dilapidated disrepair, seemingly a consequence of the acrimonious and prolonged Tuhoe /Crown Waitangi Treaty negotiations that have now only just been settled.

With its systematic presentation of ‘raw’ building materials - reoccurring modular panels of chipboard and a spot-lit slab of stacked concrete blocks - and fastidiously paced film, The Fold of the Land is a tribute to a certain architectural and museological ethos, a look at the mid-seventies, but also an acknowledgement of the inevitable power of nature - and the forces of postcolonial history.

To make this project with its thoughtfully spaced walls, eloquent text and smoothly gliding (filmed) tracking shots Western has used the building, writing and filming talents of fellow artists Michael Parr, Henry Babbage and Iain Frengley. Just inside the entrance in a dimly illuminated space is a chipboard table on which is an information display about Scott’s building, its design and fittings, some contextual photographs, and a photocopied conservator’s damage report on the ‘kidnapped’ Urewera McCahon mural.

Although this is a clearly clever installation, with its measured corridors, overtly panelbased walls, precise lighting and palpably emotional content, for me the film within it is a special treat, especially Frengley’s camerawork under Western’s instructions. It has a tight organisational structure that would let it be appreciated in a non-installational, non-architectural context.

Frengley’s moving shots of the Visitor Centre’s dim rundown interior have a beautifully formal planar geometry as they move back and forth along the deck, inside walls and cobwebbed windows, studying the moist dappled foliage, exposed water-damaged struts (where the wall cladding has been removed), external light and canopied sky. Meticulously orchestrated with dark pauses, streaming sunbeams and contrasting rectangles, the tracking (like say, Chantal Akerman’s From the East) is mixed with one very slow zoom (akin to Michael Snow’s Wavelength). Like say Akerman the film is less about about narrative and more about a visceral kineticism - the bodily transport of the viewer along mainly horizontal vectors.

The soundtrack is important too. It uses the talents of composer Jason Post and features the local cicadas. The volume of their persistently shrill throbbing provides a rapidly graspable sense of being indoors or out - and also a slightly sinister claustrophobic ambience reminiscent of the electronic music of Wendy Carlos and her Sonic Seasonings (1972). The bush has a presence in this film, a hint of menace, an ominous pressing in upon the building - despite the ubiquitous damp - a hot shimmering, oppressive, aural haze.

This centre once held taonga but now those treasures are gone, no longer visible, placed elsewhere in a metal storage container. There is a sense of the once museum/gallery and/or architectural masterpiece being thoughtlessly abandoned and deliberately left to rot. Western’s images of dissolution, though seductive filmicly as moving abstraction, still shock.