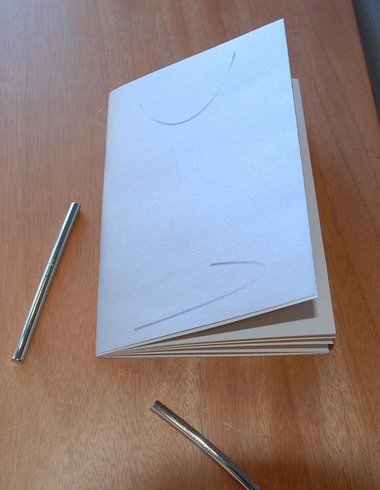 Lomas is especially interested in the notion of ‘deep communication' as used by Sean Sturm and Stephen Turner in their attack on New Zealand's aspired ‘Knowledge Waves'. In other words she is creating a specific correlation between the mundane nature of supermarkets and convenience stores and our universities and polytechnics - critiquing a return to tertiary education that was ‘practical' as espoused by Robert Muldoon.

Up here in Auckland Yona Lee is chiefly known for the two installations she exhibited not so long ago in the Artspace loft and in the ‘drawing wall’ area of Te Tuhi. In both cases, straight, rigid and horizontal stainless steel rods were a crucial ingredient, while the three-dimensional placement of elements seemed meticulously preplanned before the physical process of installing started.

Her more recent exhibition Tangential Structures at Enjoy in Wellington (in March) involved a method that looked looser, more casual and chaotic than those previously ordered and taut presentations, and now featuring curly chrome coated steel. Its attendant publication is a tidy and very elegant, silver covered pamphlet - beautifully designed by Sorawit Songsatava, with a large number of informative but sumptuous photographs by Lance Cash and Alex Alvarez. The essays by Claudia Arozqueta and Julia Lomas are very short, but also very useful, devoid of waffle and abstruse jargon, and covering different areas of research - with little overlap.

Arozqueta’s text (Steel Life) emphasises how Lee’s later project used all the bodily senses, highlighting in particular touch, smell, and sight to stimulate the gallery visitor. The work was a sort of three dimensional ‘scatter piece’- in the Morris / Le Va / Duchamp tradition - where toilet rolls unravelled over the floor with broken crockery, abandoned clothing, spilt wine and perishable food, mingled with columns of household objects, magazines and lines of garments. These were positioned at unexpected heights by way of steel hooks, clamps, rings, stands and suspended racks.

Besides blending signifiers of a private domestic living space with retail accessories found in commercial merchandising displays, freshly cut flowers, damp towels, perfume, smelly ashtrays and lollies were also used to destroy any dominance of the visual. With this tactile, olfactory, aural and ocular immersion, it seems to me questions were raised hinting that the various media creating art experiences can rarely be restricted to solo senses only. Many senses were being utilised by the ‘receiver’ at any one time. W.T. Mitchell has written eloquently on this theme.

Lomas’ essay (Reading Sordid Space: Modern Convenience Stores and Tangential Structures) looks at how we interpret Lee’s version of a commercially focussed, product display room, and its wildly deranged ambience. Lomas calls Lee’s treatment of space deliberately ‘sordid’, ‘corrupted’ and ‘tawdry’, believing Tangential Structures to be undermining the consumerist ideology and marketing methodology that accompany spaces like convenience stores, chain stores, pharmacies and supermarkets, mocking the dominant, visually pedestrian systems of product display with their posters and barcodes. Lomas is especially interested in the notion of ‘deep communication’ as used by Sean Sturm and Stephen Turner in their attack on New Zealand’s aspired ‘Knowledge Waves’, looking in particular at spatial design principles (p.163) incorporating Ranciere’s ‘distribution of the sensible‘. In other words Lomas (with Lee) is creating a specific correlation between the mundane nature of supermarkets and convenience stores and our universities and polytechnics - critiquing a return to tertiary education that was ‘practical’ as espoused by Robert Muldoon.

Lomas’s is an interesting, very plausible interpretation, but I wonder whether Lee’s project might be even more frenetic or nihilistic than she thinks, less focussed on the banality of certain business practices and more a gestural, freewheeling attack in the nature of something Mikhail Bakhtin discussed in his writing on Rabelais and Dostoevsky: Menippean satire - but a visual version, obviously not based in literature or narrative. Because Lee’s installation incorporated so much of a domestic space in its character, not just a store’s product display facility, the total concoction becomes also a violent fantasy about household trashing - as if a flat party has gone wrong - the house shredded leaving vertically hanging steamers.

Tangential Structures is a valuable little book where the writing is richly connected to vigorous debates that help shed light on the exhibition. Terrific visually, it’s compressed and pithy in its elucidation.