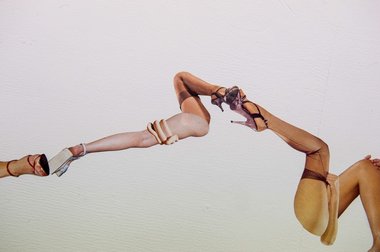 In today's open-ended environment something looking like collage can now appear a bit quaint. Besides, as Oscar Wilde once observed about ambition - that it was the last refuge of the failure - collaging can so often seem art's equivalent. Even the talentless can put together a few seemingly unrelated things, and as long as a straight-faced atmosphere can be maintained, someone is bound to make something of it eventually.

When the Cubists began incorporating fragments of newsprint into their artworks just over a century ago the act must have had the same shock value as Pop’s first manifestations in the later 1950s, the purist abstractions of High Modernism having long parted company with anything smacking of realism. The commonplace subjects of Pop simply smacked back, the figurative fist in a Lichtenstein delivering a fatal blow to what had been the 20th century’s predominant art movement. Kapow!

Before Picasso, Braque et al picked it up, sticking things together had been the province of scrapbooks and nurseries, not the Salon. The shock of the new was Modernism’s unique project, and the Cubists very deliberately settled not only on commonplace subject matter but actual, commonplace materials to reinforce their commitment to a revolution in production and perception. The materially suave, smug and seamless products made for the Salon were not for them.

The proper subjects for art were a given until the advent of Realism as a movement earlier in the 19th century. Before that, tribal beliefs and then organised Christianity provided the framework for depiction. Even those charming and informative scenes of ordinary life in the Middle Ages were securely framed within religious texts of some kind. Among Realism’s confluence of causes were growing democracy, the rise of the independent artist, the decline of formal religion and the invention of photography. Once propriety had been dethroned by this rabble of reasons, subject matter found itself liberated from the bonds of social expectation, but even now at the beginnings of the 21st century, still occasionally hankering after the securities offered by landscape, portraiture and still life. Such genres straighten things out: collage mixes things up. A process used by Cubists as a formal device to shock by its ordinariness, it came into its own with Surrealism’s playing with the subconscious, where mere juxtaposition was meant to spark symbolic and sexual associations, and often did.

Cubism went beyond subject matter - just as it abjured conventional realism, it rejected the propriety of materials such as oil paint and marble, using whatever came to hand to further its revolutionary aims. After a century of such fervour the temperature may have cooled somewhat, but, in terms of subject matter and materials, now anything goes: cardboard, string, plastic bags, sump oil and excrement. All the isms seem to have lost their right angles.

In today’s open-ended environment something looking like collage can now appear a bit quaint. Besides, as Oscar Wilde once observed about ambition - that it was the last refuge of the failure - collaging can so often seem art’s equivalent. Even the talentless can put together a few seemingly unrelated things, and as long as a straight-faced atmosphere can be maintained, someone is bound to make something of it eventually. In this respect collage may be the mother of video art.

JK Russ has been putting a few seemingly unrelated things together now for several years - firstly in her native New Zealand, but over the past four years in Las Vegas where she now lives - with a consistency and growing pungency suggesting anything but a lack of talent. Her “anything goes” applies to both materials and her subject matter. Over the past seven or eight years she’s developed something of a signature in sourcing corny commercial art prints from the 1950s and ‘60s - the sort smartly trendy cafes feature and Generation Xers pay high prices for in retro shops - images of the Sublime run to seed, dusky maidens sporting hibiscus blossoms, naïve ballerinas and chaste swans, all in all garish idealisation harder than a lump of Inca sculpture. To these innocent images she has applied, with due respect to proportion and perspective, both female and male figures cut from porn magazines, a provocative staffage announcing the shock of sex and desire.

What’s called pornography is meant to happen in the privacy of one’s room - the hiding of what is clearly of universal interest being one of the greater hypocrisies of the age - but Russ’s literal outing of these narratives into such theatrical open spaces cocks a snook at this moralistic social convention. Latterly her staffage has extended to sea urchins, starfish with human eyes and mouths and the enlarged pistils of flowers - severed from the context of their petals, stems and leaves - all of which need no elaboration as potent extensions of her imagery and symbolism.

This refreshing lack of obscurity makes the imagery an engaging mix: low camp swerving left to right between high drama, lurid colour swelling the suggestiveness of the symbols, the outrageous figures posturing in a surrealist opera, sets by Balthasar Neumann, libretto by John Waters and score by Sigmund Freud. If you ever needed an opposite to Minimalism, this is it.

There’s a minimalist edge to some of the new works in the Gisborne show though. Of the dozen present, nine are vinyl collages applied directly to the walls, not only unframed but unframable. (Presumably, the ones in the show were the artist proofs indicated in the catalogue - itself a rather weird production, which, with the lack of numbers there and on the wall, made it virtually impossible to surely identify which work was which. Not even the gallery assistant could tell.) Some of these vinyl works creep up the wall from the floor, and one of them, a cut paper installation - Drawing With Legs - goes around two corners: the first concave, the second convex. Another cut paper installation - Cactus Garden - features a large flowering cactus where some of the flowers have been cut out and arranged symmetrically around the plant both on and beyond the rectangular confines of the work’s “edge”. Russ’s edginess as an artist can be quite literal, and equally challenging to conventional perception. Her work also blurs whatever edge there may be left between “fact” and “fiction”, and the archtypes she frequently depends on are given a visceral pungency by quoting them via such realistic means.

In But Beautiful (Bird Woman Diptych) there’s an image of a Leda-like woman being mounted by a grey gull that makes Psycho seem like child’s play. Russ messes with your mind and memory more adroitly than Norman Bates messed around in the shower. But Beautiful also features a blue (very blue, in both colour and sexual reference) Nefertiti-like profile, the head crowned by a blind rooster. The whole mixed-media work consists of two, contiguous (but at an odd angle - of course!) LP record album covers, the cover to the right mirroring the image to the left, but upside-down, making a comprehensible pattern of what seem very random collages of disparate imagery. These frequent couplings of human images with birds (and other life-forms, elsewhere) suggest the irrational urges implicit in sexual power and the limitless computations of sexual desire, and here Russ’s work transcends the often boring literalness of conventional pornography.

The title of We’ve Only Just Begun is, along with the actual work, an instance of Russ’s sly, subversive humour, as well as an oddly appropriate reference to Karen Carpenter, the anorexic American pop singer who was a sex-bomb but in a very anorexic kind of way. The image consists of, another, blue female face surrounded by three flower-heads out of which single hands emerge holding, respectively, a diamond, a cigar and a raspberry. Hey, apart from being a girl’s best friend, sometimes a diamond’s just a diamond, right?

The densest work in the show - a five-part, separately framed sequence - which also references the show’s title $nake Bite KI$$, is titled Mid Modern Medusa, and features a further blue woman bearing more than a passing resemblance to the great American-born Greek soprano Maria Callas, one of whose most enduring dramatic roles was as Medusa in Cherubini’s 1797 opera. Mid Modern Medusa is a summation of Russ’s current work, a virtual catalogue of her imagery but not at all a pedantic listing: here, given full rein, are her blue women, snakes and spiders, an intense scenario which, reading from left to right, ends in an all-consuming bright, white flame.