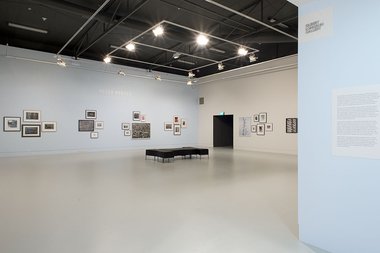 Until now, Peter Peryer's curators and writers were all born well before 1980, baby boomers educated mostly under Modernism and many coming late to the medium of photography. So, the Peryer orthodoxy was constructed during an interesting intersection of circumstances and it's now a period piece itself, and should be left as is. In the meantime some younger curators are stepping up, ready with fresh primer and a few licks of a new undercoat.

The usual story goes something like this: an emerging artist attracts interest, they’re picked up and promoted by a posse of curators, dealers and collectors, with a libretto incrementally constructed by a range of writers that, before long, can ossify into some kind of orthodoxy. What may have started out as a casual observation in an early newspaper review can end up a granite cornerstone of a chapter in a surveying art history. This pigeon-holing seems resistant to change for any number of reasons, mostly social and financial: in a small society few want to risk seeming mean-spirited in pointing out an artist may have lost their mojo, and in any society dealers have an interest in maintaining their stable’s profile, and collectors are similarly averse to having their assets down-graded. Unless there is a tradition of fearless critical practice to counter such timidity it will have free rein. Once an orthodoxy is established there are seldom any radical re-readings or re-evaluations. The granite remains uncarved.

Orthodoxy is a double-edged sword. Not only does it fail to lacerate those mid-to-later career artists whose work has failed to live up to early promise, it pins those whose work hasn’t against the wall of their early achievement, wriggling in frustration at the regular reappearance of time-worn phrases and judgements. If re-readings and re-evaluations happen at all it takes at least another generation to take a fresh look.

Taking fresh looks was not encouraged under Modernism’s rather hegemonic but high-minded project. It needed to appear authoritative and all-embracing, if only to justify the pursuit of its revolutionary aims: its schemes progressive, its judgements definitive. But what began as pushing boundaries ended up surrounded by the wall of its own orthodoxy, discouraging difference and intolerant of dissent. It was the age of the solemn retrospective, those chronologies of an often pretended linear development studded by “major” works propping up “iconic” reputations.

We’re still labouring in the penumbra of all this of course, but there are some increasingly hopeful signs that a more relaxed modus operandi is emerging - lead, perhaps, by a diversity in artist practice more than by any impetus from institutional museum studies courses - where a generation born after 1980 has less interest in conforming to the orthodoxy than in messing with some playful heterodoxies - they’re not down at the bowling alley but out in an open field kicking a few balls around.

Until now, Peter Peryer’s curators and writers were all born well before 1980, baby boomers educated mostly under Modernism and many coming late to the medium of photography. So, the Peryer orthodoxy was constructed during an interesting intersection of circumstances and it’s now a period piece itself, and should be left as is, with no further lean-tos added until the time’s right for thorough reassessment. In the meantime some younger curators are stepping up, ready with fresh primer and a few licks of a new undercoat.

Just a few years after the photographer first seriously took up a camera, the entrepreneurial young director of the Hutt’s Dowse Art Gallery, Jim Barr, took a punt in 1977 and mounted Peter Peryer: an introduction, the 29 works including images from the Mars Hotel portfolio, several of his enduring early portraits, and some from the Erika series, all collectively signalling the arrival of a singular artist. Eight years later the Barrs curated a slightly larger show for the Sarjeant Gallery - 33 images - the content revealing a more focused style which, by and large, has since remained the foundation of his practice. The Sarjeant exhibition toured nationally and brought Peryer’s work to the notice of a much wider public. Over the ensuing thirty years he has exhibited nationally and internationally, his work included in most significant exhibitions, and now is possibly this country’s most respected contemporary photographer. No monument to his own reputation though, he’s consistently capable of surprise. Any new image is impossible to anticipate, and yet it’s instantly recognisable as a Peryer, another citizen of that sovereign state Peter Simpson called Peryerland.

The curator of A Careful Eye, the Dowse’s Sian van Dyk, is herself careful not to claim “survey” or “retrospective” status for this show, and any sort of definitiveness is, refreshingly, not part of her agenda. It’s a sizeable show nonetheless - 57 images this time - but in the large gallery space it doesn’t feel at all overwhelming. In fact there’s an intimacy stemming from the show’s structure: there are 14 separate groupings of photographs, careless of chronology and any numbing relativity of scale often the bane of more comprehensive photography shows.

These signature groupings run from 2 to 7 images, but are mostly composed of 4, 5 or 6, and are generally a mix of sizes from small black and white prints to large images in colour. What binds the groupings together - and this is the curatorial triumph - is an instinctive, but convincing reference to the artist’s formal concerns. Sometimes these connections are amusingly obvious, but others are more elusive, and these collisions of imagery spark fresh interpretations and insights, not just for individual images but for the artist’s oeuvre as a whole. For what is Peryer other than a master of the obvious and simultaneously a poet of the elusive?

This bold curatorial approach may have its critics. A case could be made that such groupings reduce photographs to the status of clever décor, and there could be times in the show where this precipice is only barely skirted, but you would have to have a heart of granite not to respond to this artful playfulness nor to engage with the possibilities such an arrangement offers so prodigiously, accessibly and even joyfully.

There’s something Peryer-esque about both the selection of images and their placement in the groupings - even in the relationship of the groups - and, on reflection, this is one of the many unexpected satisfactions of this exhibition, and strongly suggests the judgements involved have been based on a clearly thorough and sophisticated understanding of Peryer’s practice, and here the photographer’s co-operation in the process has to be saluted, while acknowledging that, as consummate professional, he has left all major decisions to the curator.

Raining on such a fine parade gives no pleasure: A Careful Eye is accompanied by a 104-page publication reproducing all 57 images in the show plus a short foreword by the Dowse’s director, Courtney Johnston, a thoughtful 8-page essay by curator van Dyk, a 3-page reminiscence by the Barrs and a full catalogue listing of all the works. The design is crisp and consistent, but the production is a disaster. Even allowing for the difficult circumstances surrounding its advent, such merchandise from an institution of the Dowse’s status is inexcusable. Largely because of the paper stock the reproduction quality is lame at best, particularly for the black and white images. The reproduction’s better in the 1985 Sarjeant publication, thirty years ago.

Exhibitions come and go but publications go on forever, and it’s tragic such a fine show will be remembered by this shoddy book. Well, most publications go on forever. This one hasn’t lasted a week - every time it’s opened another page flies out. It’s certainly not fit for purpose. The Dowse should be giving these catalogues away - while still blushing - not charging $25 a copy. To regain and maintain credibility the Art Museum needs in future to engage an experienced professional such as Neil Pardington - with his careful eye - to oversee its publications.

In a radio interview on Sunday 24th August Peter Peryer referred to photography’s scientific origins, and his cool, detached eye, constantly alert to the actual particulars of the physical world, is that of a scientist more than of the conventional “expressive artist”. What he’s expressing, though, is wonder, wonder at the visual DNA of the world’s particulars this self-confessed “walking microscope” seizes on and fixes in his sights. He told his interviewer “My pictures are about one thing.” A Careful Eye is about one thing too: Peter Peryer’s delight in the awareness of living.

Kia ora Peter As the director of The Dowse, I’m thrilled to see Peter Peryer’s exhibition reviewed here on EyeContact. ...

As the director of The Dowse, I’m thrilled to see Peter Peryer’s exhibition reviewed here on EyeContact.

We’re very proud of the exhibition and I’m pleased to see you endorse Sian van Dyk’s curatorial approach. It does take a certain bravery to address in a fresh manner the work of an artist who has been frequently exhibited and discussed over a long period of time.

I’m disappointed however that the accompanying catalogue doesn’t live up to your high regard for the show.

Without blushing, (no-one ever really did die from embarrassment) I don't debate that a falling-apart book is unacceptable and we will address this with our printer and happily offer to refund or replace for anyone who experiences similar issues. I refute though the suggestion that the publication was produced without the benefit of a ‘careful eye’.

The credit for the ‘crisp and consistent’ design goes to our in-house designer Michael Pester, who worked closely with Sian and Peter to achieve this effect. Where we may have erred was in trying to create a book that would fit in a series kicked off with our Saskia Leek publication (highly commended in the 2014 MAPDA Awards) and hence continuing with the same paper stock. We have not had any reports of that publication coming apart and I can only hope the new one we’ll send you will find its permanent place on your shelves. On that note, we value our relationship with our printers, who are based just down the road from us, and try our best to support local business when we’re spending local money.