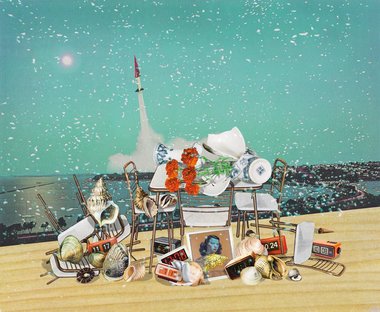 The third work, Blue Monday, is surreal in atmosphere. It shows a couple of broken vases with tipped out flowers on a tubular table surrounded by chairs on a patio overlooking Auckland beaches. In the distance a rocket being launched from Bastion Point. Discarded electric clocks and decorative conches lie scattered around an upturned chair and an abandoned Tretchikoff print. The damaged items seem to represent history while the rocket alludes to the future.

Kerry Ann Lee
I Have Always Been Here Before

This show of Kerry Ann Lee‘s at Whitespace comes hot on the tails of her recent very successful billboard project at Te Tuhi, on Reeves Road. That trio of hoardings was part of Bruce E. Phillips’ exhibition, Unstuck in Time, and presented images of consumerism blended with futuristic subject-matter, but rendered in a late fifties British pop art style. As large, bright and decisive images, they were the sort of whopper digital print you felt you could stroll up to across the footpath and step into.

The indoors exhibition work is quite different in scale, presenting smallish digital prints and posters on paper - sixteen items, plus some zines she has designed and written for. They are like Photoshopped ‘collages’ but consistent in their use of scale, like paintings. They feature downloaded images plus photographs she has taken herself when travelling overseas.

Three prints, Total Recall, The Defenders and Blue Monday, are miniature versions of the billboards. It is good to see them again although for me, they should at least the double or three times their size. As prints they are exasperatingly pokey, for as hoardings the images close up - in comparison - were wondrously rich with cellular patternings. The smaller paper surfaces are comparatively bland.

Total Recall depicts a pyramidal shrine, an architectural monument to luxury with railed escalators, peppered with diamonds and pearls, ferns, heaped up whiteware, ladders, herons and computer discs, set in what seems to be Wellington Harbour. The Defenders is less overtly caustic. It has two children playing with a cannon aimed directly at a cluster of stacked up weatherboard houses, this configuration surrounded by psychedelic toadstools and towering construction cranes (one with a wrecking ball), with planet Earth hovering in the sky.

The third work in this series, Blue Monday, is surreal in atmosphere. It shows a couple of broken vases with tipped out flowers on a tubular table surrounded by chairs on a patio overlooking Auckland beaches. In the distance a rocket being launched from Bastion Point. Discarded electric clocks and decorative conches (symbols for the sounds of the past?) lie scattered around an upturned chair and an abandoned Tretchikoff print. The damaged items seem to represent history while the rocket alludes to the future. Despite there being a blue sky the air is filled with thick snow, like floating kapok, that brings a fairytale quality.

Three other prints in the Whitespace show have close connections to these three images, and refer more directly to Lee’s Chinese heritage, examining the ideological tussle between old school communism and a new synthesis with capitalist consumerism. There is no romance without rain, Sincere Gifts, and Hurry on Sundown present young women (European and Asian) drooling over luxury commodities, while Diamond Republic and Lost Empire contemplate the economic direction China seems to be heading.

There are lots of overlapping references and symbols in these prints and sometimes unexpected themes too, like the mnemonics referred to in Sincere Gifts, the memory system of imagined objects placed on plinths in imaginary rooms to help recall the conceptual trajectory of a speech. (See this link to the much admired book on the subject by Frances Yates). You can pour over these images for hours, lingering on the detail in the symbolism and various allusions to history, global culture and speculation for the future.