“Let There Be Light” (Twenty Times Over) 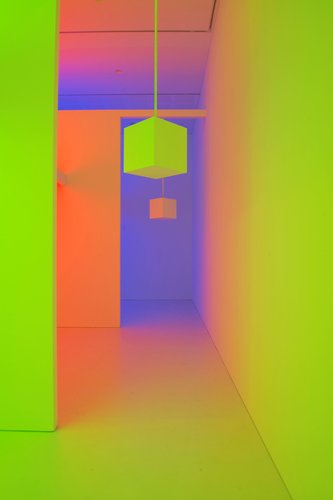 Light Show is the most unabashedly spectacular international art show Auckland Art Gallery has presented since the new revamped building opened, and the largest of its touring shows so far. Fun but not frivolous, it demands the visitor's full concentration while experiencing new kinds of bodily sensation through light, and generating perhaps new kinds of thinking.

In this international exhibition, toured by London’s Hayward Gallery and selected by Cliff Lauson, that institution’s curator, we see Auckland Art Gallery devote the best part of two floors to twenty sculptures (or installations) by eighteen artists - many of whom have not exhibited in this country before. Though light as a phenomenon - be it directly experienced, illusionistically represented, or referenced (perhaps providing a symbol) - figures in a high percentage of artworks, Light Show is about direct bodily encounter with sensual and pleasurable varieties of electric illumination. The show’s timing, perhaps, is a clever counterbalance to the non-experiential dominance (some might say ‘dryness’) of the 2014 Walters Prize.

Most of the works (especially the installations) have single rooms all to themselves. This methodical control of light so there is no undesirable neighbourly interference is what makes this exhibition so remarkable - each exhibiting space has its own character, dominated by the requirements of its own particular project.

Lauson’s line up of artists is not that of a regular ‘light show’, for it ignores some artists known for their use of electric light (like Spencer Finch, Angela Bulloch, and Erwin Redl) but includes others with varied - decidedly conceptual - practices (Ceal Floyer, Jenny Holzer, Francois Morellet), where properties of illumination are not their raison d’être. There is an appealing unpredictability about this show.

What’s interesting are the various groupings based on similarities between contributors. There are about six obvious categories: there are those where coloured light is reflected off the supporting wall or adjacent planes (Dan Flavin, Carlos Cruz-Diez, David Batchelor, Jenny Holzer); those where the viewer is enclosed inside a confined space, looking out at the surrounding walls, floor and ceiling (Ivan Navarro, Conrad Shawcross); where beams of light are projected through machine-generated smoke (Anthony McCall, Ann Veronica Janssens); where tableau-like theatricality is exploited via a space behind an exposed or implied wall or plane (James Turrell, Olafur Eliasson, Bill Culbert); where sculptural cores utilise moving radiating light (Cerith Wyn Evans, Leo Villareal, Jim Campbell, Jenny Holzer); and those where stationary white light becomes a sculpture in itself (Katie Paterson, Dan Flavin, Brigitte Kowanz).

Of the twenty works, at least seventeen are completely engrossing. For a group exhibition, that is a high hit rate, the sign of a very successful and memorable visit. Five in particular I found absolutely astounding, utterly magical works I kept returning to over and over.

One of those is Olafur Eliasson’s Model for a timeless garden, 2011, an extraordinary otherworldly tableau involving water and a flashing strobe that transmutes running liquid visually into silvery glass or frozen mercury. The experience it provides is very unusual because of the piercing light intensity and the surface quality of the flickering fluid, its shadowy drama and inventive 3D water shapes.

Dan Flavin’s untitled (to the “innovator” of wheeling Peachblow), 1966-1968, also impressed with its structure based on a four-sided skeletal square, with yellow vertical fluorescent tubes and pink horizontal ones causing mingled delicate washes to traverse the hinged planes of the straddled corner. The glowing tubes themselves are obscured by their white supporting shields, so seen light is mainly reflected, with only a few slivers radiating to your eye directly.

Carlos Cruz-Diez’s Chromosaturation, 1965-2013, takes Flavin’s idea and extends it to filling whole rooms with coloured reflected light by wrapping fluorescent tubes with blue, red and green filters and presenting them on separated (walled off) platforms below the ceiling. This allows the chroma to mix not only on the upper plane and that of the adjacent walls, but also on carefully positioned white-painted cubes placed high in the corridors.

The complicated planar experience offered by James Turrell through peering into an adjacent (but not entered) room, is more mysterious and involves angular projections, a smoke machine, and orange light emitted through ‘framing’ translucent Perspex strips. The illuminated and radiating linear demarcations presented in Wedgework V, 1974, seem to allude to the famous perspectival drawings of Josef Albers, achieving a flattening out of deep space, brilliantly reducing receding architectural form to diagrammatic schemata.

Introducing linguistic content via textual quotations enables Jenny Holzer’s Torso, 2007, with its ten curved double-sided electronic noticeboards, to mix swirling optics with political critique. Samples of US government military documents on ‘The War on Terror’ are blended with a shrill and garish Las Vegas-style vulgarity, using different types of strobe speed and at times, two overlaid coloured texts, to bring a gritty and disturbing inflection to the overall exhibition.

Light Show is the most unabashedly spectacular international art show Auckland Art Gallery has presented since the new revamped building opened, and the largest of its touring shows so far. Fun but not frivolous, it demands the visitor’s full concentration while experiencing new kinds of bodily sensation through light, and generating perhaps new kinds of thinking. All for the price of a movie ticket.

(Remember that the images with this article - as attempts to record the gallery experience - are doomed to fail. Remember too, that if you want to visit, try and do it over the working week. Less vertical bodies will be around to obstruct your view, and less hideous hyperactive children who think that anything with a smoke machine or light beam is a disco club for them to leap about and scream in.)

The Venezuelan artist Carlos Cruz-Diez has just died. He was in his mid nineties. His work was one of the ...

The Venezuelan artist Carlos Cruz-Diez has just died. He was in his mid nineties. His work was one of the highlights of Light Show, seen in Auckland in 2014.
https://www.bbc.com/news/world-latin-america-49150623
http://www.artnews.com/2019/07/28/carlos-cruz-diez-dead/