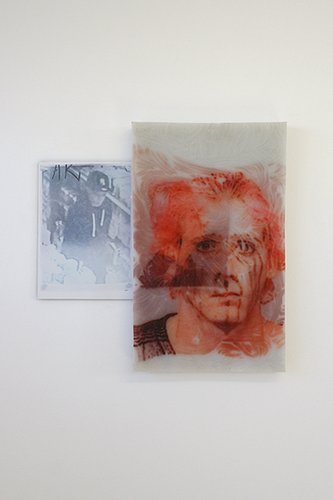 Clement's exhibition is a deft exploration into the visual potentials of various media and how they can impact upon each other and the image they represent to present and complicate thematic issues. To represent the topical and newsworthy is a secure thematic point of interest for the artist in that it quite rightly assumes a level of comprehension from the viewer. Yet is the adaptation of internet images within a new art medium meeting the complex demands of such a diverse and contentious issue?

The Right to be Forgotten

The internet’s role in the representation and construction of identity is increasingly becoming the instigator of social anxiety and artistic investigation. In the wake of the GCSB legislation and recent skirmishes surrounding internet blogging in this year’s election, matters surrounding internet security and privacy seem murkier than ever in public perception.

Artists have turned to the social and political implications of this through various exhibitions this year. In August Emil McAvoy employed a Futurist-inspired style in his show at Wellington’s Enjoy Public Art Gallery to launch a visual critique against GCSB legislation and its implications for civil liberties. Similarly, Simon Denny’s current show at the Adam Art Gallery delves into the implications of intellectual property, copyright, access to information, and privacy rights in the realm of the digital.

Ben Clement is another artist exploring these themes. His exhibition at Gloria Knight entitled The Right to Be Forgotten is an exploration into the seemingly contradictory qualities inherent in Internet representation: an impression of impermanence complicated by immortalising publication and documentation. The value of the internet is that information can be easily and quickly shared on a global scale through the updating of a Facebook profile or the uploading of an image onto Instagram. Although such additions and adaptions to personal representation can be made instantaneously, they are by no means transient in nature. Personal profiles, whether self-made or externally inflicted on the self, construct and define the individual.

The exhibition’s title explicitly refers to the 2013 European Court of Justice ruling that Google should delete data deemed inadequate or irrelevant when requested to do so by the public. Although perhaps reassuring in that past transgressions now do not necessarily have the power to determine personal identity, this ruling also raised potent criticism. If internet’s value is in its supposed provision of a democratic realm of communication transcending national boundaries, to what extent does this erasure of the past infringe upon those values? What is deemed irrelevant or inadequate? What are the parameters for censorship? The internet is a realm in which people are empowered with the ability to curate their lives. While an individual’s past should by no means define their existence for posterity, should a criminal background be purged from a biography to enable a ‘positive’ curatorial exercise?

Clement explores these concerns by utilising CCTV stills and mugshots (presumably taken from webpages). These images blur the boundary between reality and documentary in both their subject and in their representation. While most of the CCTV images are printed on aluminium panels, the mugshots are displayed on recast polyethylene.

As with previous shows in Gloria Knight, a play on materiality is thus performed, providing an interesting visual allegory to the levels of certain/uncertain, knowable/unknowable presence in the realm of the digitial. Although on a flat, two-dimensional surface, the people in the CCTV footage stills are blurry to the point of being indefinable. Likewise, although solid, three-dimensional objects projecting from the wall, the images on the recast polyethylene are warped and blurred in theire thick layers. The incised curving lines on the top layer both emphasise the object’s materiality yet also complicate its impenetrable solidity. The photographed people seem to be both immediate yet also on the periphery of the viewer’s gaze: seemingly obtainable yet also beyond our visual (and physical) grasp.

The subjects’ eye contact and their cropped head and shoulders positioning within the frame render them memento mori. But what is being immortalised here? Their personality is unknowable, any distinct physical characteristics are complicated, their specific offence is uncertain. The only thing certain is that a societal transgression (actual or perceived) has been committed. Clement’s utilisation of media cleverly visualises the contradictory nature of internet reportage and representation. People can be searched and facts can be quickly scanned, but to what extent does this pinpoint or fossilise the multi-faceted nature of human personality?

This is especially problematic when considering the internet’s potential to foster notoriety, in the process reducing individuals to abstract signifiers. Two images in the exhibition feature Jeremy ‘Dreamy McMug’ Meeks, whose mugshot has brought him worldwide fame and the promise of modelling contracts once released from prison. Notoriety, then, transcends the real implications of the image. In another work, a person dressed up as the Joker stares out at the viewer from behind the layers of polyethylene, their real physical traits obscured beneath thick make-up and the wavering layers of the artistic medium. The internet is a stage upon which people enact, simulate, and create versions of themselves, rendering any definitive interpretation nigh impossible.

Such fragmentation of presence is shrewdly evoked through a woollen scarf connecting two separated CCTV stills. The scarf implies a connection yet the blurred quality of the images renders this material connection arbitrary in its significance. This is perhaps akin to the haphazard forging of perceived factual links across various internet forums, inevitably snowballing into defiant argumentative statements proclaiming a certain truth (ie. conspiracy theories surrounding events such as 9/11, the moon landings etc). Again materiality is a key factor in this sequence of images. The woollen material is on top of the polyethylene yet also seems ingrained into it while the aluminium printed CCTV images underscore the varying textures connoted in the series.

Clement’s exhibition is a deft exploration into the visual potentials of various media and how they can impact upon each other and the image they represent to present and complicate thematic issues. The sheer topicality of Clement’s chosen subject makes his show engaging and thought-provoking. I do, however, feel that the popularity of this topic in today’s art environment demands something more. To represent the topical and newsworthy is a secure thematic point of interest for the artist in that it quite rightly assumes a level of comprehension from the viewer. Yet is the adaptation of internet images within a new art medium meeting the complex demands of such a diverse and contentious issue? Although not similar in any way at all, I felt the same level of dissatisfaction when viewing McAvoy’s show. To simply visually express ‘the issues of the internet’ makes the thematic topic the point of interest rather than the artworks themselves. Clement’s utilisation of materials is certainly visually interesting and conceptual in its evocation of layered meanings. It will, however, be interesting to see how/if this topic is further visually extrapolated upon and analysed in future artistic endeavours.

Whatever one might think of any of the exhibitions mentioned in this review, it's great to see a number of ...

Whatever one might think of any of the exhibitions mentioned in this review, it's great to see a number of NZ artists currently making work to do with the very topical issues of internet security, privacy, mass surveillance, and "the social and political implications."

As well as the current work by Denny, McAvoy, and Clement, I'd certainly add myself to that list. In the interests of spirited discussion, I'd also be interested to know if there are any other NZ artists currently working along these lines? After all, we're a small nation and arts community.