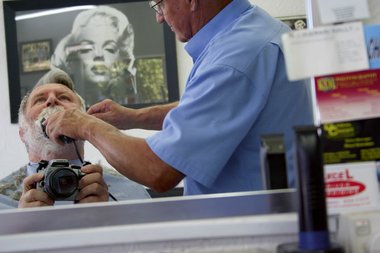 In the book there's a typically unflattering self-portrait of the photographer taken via a mirror, not with a celebrity but with his barber while having his beard trimmed. Not quite a selfie, but then again it may be, making a sly comment on the whole selfie phenomenon. On the wall behind is a large poster of Marilyn Monroe, overseeing the mundane task with an exaggerated sultry pout. This apparently simple self-portrait is sure testament to Turner's very active eye and instinct for noting the complex pulses of social change.

John B Turner
Te Atatu Me: photographs of an urban New Zealand village

When mayor in the 1960s, Sir Dove Meyer “Robbie” Robinson used to joke that Auckland was a collection of suburbs in search of a city, and to a large extent that remains true. Citizens are more likely to identify as coming from South Auckland, wear the badge of “Westie” or live on “the Shore” than admit to being “Aucklanders”. Otara and Remuera remain different countries, not merely different geographic locations. So, it’s a tribal landscape Te Atatu Me pays tribute to. That “urban village” of the sub-title speaks volumes.

Grant Cole’s finely-illustrated essay expertly and engagingly traces the development of this urban village from being lightly-populated farmland in the 1940s to the busy, richly-diverse community it is today, its character determined to a large extent by its geographic, self-contained status as a peninsula. You can see the Skytower in the distance but the intervening stretch of water and big skies give it the feel of someone else’s film-set. Auckland’s “over there”. Te Atatu’s here.

John B Turner has had a life-long engagement with such unfashionable villages: he was born in one - Wellington’s Johnsonville - and raised in another, slightly larger one, Lower Hutt, still regarded by the Capital’s patricians as lying somewhat beyond the pale. Over 1966 and 1967, while photographer at the then Dominion Museum, John Turner returned to his roots and made Mr Johnson’s town the subject of a documentary project, as one did in those more earnest days.

Now and again single images from this historically quite significant enterprise turn up at auction or appear in books, but the series has never been exhibited nor published as a whole, and let’s keep hoping this might happen in Turner’s lifetime. It would be a rewarding and revealing project for a rookie curator, not only fulfilling the photographer’s documentary intentions but illuminating a key period in contemporary New Zealand photography. Johnsonvillians would probably enjoy it too. What’s there not to like in such a proposal?

Turner’s most conspicuous life-long engagement, though, has been with photography per se. Few people outside the somewhat enclosed world of photography would be aware of Turner’s major role in foregrounding the medium here in New Zealand for the past 45 years. The whole gamut: from historical in the 19th century to contemporary in the 20th and 21st (1), involving exhibitions, books and articles, tertiary teaching and lecturing; anything in fact that might further the cause of photography in terms of recognition and acceptance. To say nothing of the encouragement and time he’s given to three generations of emerging photographers. Some of which, it must be admitted, could be complicated and not always appreciated. But, compare Turner’s with St Paul’s Christian missionary zeal and the saint comes over as having been a bit slack.

Quite probably not even the National Library has an accurate count of the articles and books Turner has had a hand in, yet Te Atatu Me is the first book of his own photographs. He’s 71 now and has been photographing for over half a century. This gap - incredible in the age of self-referential culture - can be explained, simply, by his being busy with other photographic matters.

Talking of self-reference, in the book there’s a typically unflattering self-portrait of the photographer taken via a mirror, not with a celebrity but with his barber while having his beard trimmed. Not quite a selfie, but then again it may be, making a sly comment on the whole selfie phenomenon. On the wall behind is a large poster of Marilyn Monroe, overseeing the mundane task with an exaggerated sultry pout. This apparently simple self-portrait is sure testament to Turner’s very active eye and instinct for noting the complex pulses of social change (2).

Turner’s unashamedly “old style” in terms of his motivation. In an unapologetic identification with a working class world he was an apostle of the ordinary long before it became a fashionable focus for those studying popular culture. Made easier, of course by “the ordinary” being photography’s breakfast, dinner and tea, and, given the facts of his background and generation, it was practically impossible for him not to be a documentary photographer. This is not to lessen his achievement in any way, however. Unusually, he has remained fixed on the documentary tradition when so many of his acolytes in the 1970s rejected it when it fell out of fashion in the 1980s and ‘90s, drawn instead to the murky glamour of “art photography” at the turn of the century. Fixed but not stuck, though.

One of the values of his practice is its phases reflect, like a well-cut gem, the facets of the documentary’s subtle evolution over a period of half a century. At one end there’s the black and white formalism of his Johnsonville series of the mid ‘60s, and at the other the often highly-pitched colour of the visually looser Te Atatu work over 40 years later. But, of course, it only looks looser. Closer examination reveals a sharp but subtle compositional eye, one still a very long way from retirement.

Te Atatu Me‘s 157 Turner images were selected from over 20,000 made over a seven-year period from 2005 to 2011. In his Introduction the photographer says: “Rather than working on grand or esoteric themes, I like to photograph ordinary, everyday family life and events in the time-honoured tradition of the amateur photographer. Basically, I like to photograph what I like to photograph, rather than be told what to photograph by clients or editors. Because of my interest in social history and the history of photography, however, I am acutely aware that many aspects of our lives and times do not get recorded, or perhaps, do not get photographed as well as they deserve. Consequently, it is the myriad of small un-newsworthy everyday encounters that make up so much of our lives, and through which we reveal out humanity and character that delight me more than the big public events that make the news.”

His portrait of Te Atatu is affectionate and non-judgemental, depicting an unpretentious, utilitarian and diverse place, big enough to illustrate most aspects of contemporary society but small enough to retain a sense of community; a core sample but with a rich vein of individuality, and this is what Turner the photographer taps into. As with any documentary project, there’s a double helix of basic information and artist input. “Over 20,000 images” raises the spectre of monkeys with typewriters - or thoughts of the dreaded “scatter-gun” approach - and this is always a risk when coverage has the desperate edge that focus has no need of. It’s a dark devil photographers always have to wrestle with. Gary Winogrand left thousands upon thousands of undeveloped rolls of film when he died, and his omnivorous approach - which accelerated as he aged - must necessarily raise questions around perspective or even sanity. But Turner’s in control: he’s just mad about Te Atatu.

He’s gathered information unsentimentally, warts and all. That’s part of the documentary deal. But often there’s a kind of aw shucks, awkward teenaged love underpinning the images - whether it’s delight in the characters depicted, or pleasure in quoting from photography’s historical iconography - which is a world away from, say, Walker Evans’ rather detached and austere documentary style. Of course, Turner the teacher is immensely literate in individuals’ photographic styles (what Evans called their “signature”) and this knowledge is amply displayed throughout Te Atatu Me. But, with him, it’s not so much a matter of style as an attitude. And, in terms of engagement, attitude will win out over style every time.

(1) Although, like the vast majority of his generation brought up on Modernism’s “truth”, he cast a pretty skeptical eye on anything connected with Pictorialism, that movement self-consciously pursuing the look of art, having its high point between 1890 and about 1930.
(2) On page 56 there’s a photograph of the interior of this barbershop and there are 7 other Monroe images visible on the walls; there are probably more in the room. Clearly the barber has a bit of a thing for her.