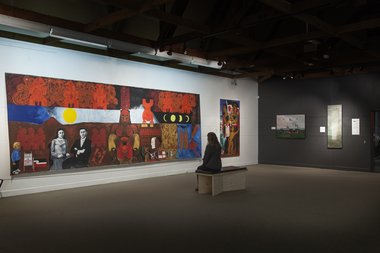 There is little doubt that at the time of first contacts in the 18th century, there was more equality between men and women in Māori society than in the European. To what extent the Māori was structurally a matriarchal society then remains up for debate, the subsequent impact of colonisation muddying the evidential waters more than somewhat.

It was to Pakeha advantage in the nineteenth century to imagine Māori society as somehow fixed in the aspic of a ‘classic’ tradition, similarly imagined. This imagining has cast a long shadow and has, in some cases, even infected Māori perception of what ‘tradition’ might mean. Any majority culture almost automatically conceives any ‘other’ as a coherent whole in order to simplify dealings with them, and any show of difference on their part is treated with impatience and dismissal. Just look at the reaction to Whanganui Māori’s insistence on the local expression of the wh sound in the pronunciation of the name of the district, river and town. Those complaining about this were seldom seen heading for Southland to instruct the inhabitants in the correct pronunciation of Gore.

‘Māori’, after all, is Pakeha naming, the moniker for a lumping together - like the term ‘Asian’ - of loosely associated but actually very different groups of people, each with their own dialects (if not languages), their own social traditions and their own takes on common mythologies. There can be much variation in social traditions within different iwi - the matter of women speaking on marae, for example - and there can be different approaches to dealing with issues within iwi and even hapu. That one-size-fits-all ‘Māori’ covers a sometimes bewildering range of practice, attitudes and perceptions. Surprise, surprise, not all that different from Pakeha.

There is little doubt that at the time of first contacts in the 18th century, there was more equality between men and women in Māori society than in the European. To what extent the Māori was structurally a matriarchal society then remains up for debate, the subsequent impact of colonisation muddying the evidential waters more than somewhat. But there does seem a lengthy tradition of a sort of public/private ‘division of labour’ where men do the public thing, while, in doing the private thing, the women organise, influence and quite often seem to be the real movers and shakers.

In the developing post-Treaty-settlement landscape, Māori men with connections and initiative come more and more to inhabit the corporate world and, inevitably, assume a corporate view of the wider world not always in accord with customary views of land and land guardianship. There are contentious issues around this in connection with the Te Ture Whenua Bill currently passing through the parliamentary process, and in terms of legislation it’s the biggest thing since Labour’s 2004 Foreshore and Seabed Act, which pitted Māori against the Crown. In the present case the bigger divisions are between enfranchised and disenfranchised Māori.

Upper Hutt’s enterprising Expressions Whirinaki initiated Waitangi Wahine last year to coincide with the observance of the 175th anniversary of the Treaty’s signing. The five women artists involved have used the opportunity, through their work, to make some forthright comments and pose some pretty challenging questions around the nature of the Treaty, the status of land, and the future of land still in Māori hands, especially given the current Bill’s concerning lack of specifics when it comes to its proffered mechanisms of a Māori Land Service and the slightly Orwellian-sounding Māori Enablers Workstream.

Older readers will recall the history of the phrase “keep politics out of sport”, and most of them were raised within the Modernist milieu where the unspoken but still forceful phrase “keep politics out of art” ruled. Modernism’s purist agenda automatically tarred any overtly political stance with the propaganda brush. So much so that even Picasso’s monumental Guernica was publicly admired but often privately suspect, discussed always discreetly in formal terms as if any nod to its political origins might result in the withdrawal of one’s Modernist party card.

How times have changed.

Then there’s the wonderful irony of the Pakeha art world of the 1960s and ‘70s desperate for a ‘major’ Māori Modernist, settling on the hapless Hotere who went along with this delicious hoax - declining to be identified as Māori - until the bugger started protesting about sites such as Aramoana and Port Chalmers in his paintings. Quelle horreur! Environmental protest was one that Pakeha could accommodate, but emerging racial protest over land issues was another kettle of kahawai altogether. A bit too close to the bone, threatening to dis-inter issues the majority culture comfortably felt had been buried generations before.

What started off in the early ‘70s as the sort of political protest the media feeds on - ‘The Treaty is a Fraud’ - soon began infesting (albeit subtly) the art of younger, admired Māori artists such as Shane Cotton and Peter Robinson. Since then the chorus has become larger and louder - no longer so easily written off as mere propaganda. What could have been dismissed as a side-show in terms of Modernist mainstream art practice half a century ago has not only reached centre stage but has pioneered a (re)connection between art practice and social/political life unimaginable in the 1950s and ‘60s. Of course, this ‘new’ phenomenon has been at the heart of photography’s continuing documentary tradition for well over a century, a fact largely going unacknowledged by art critics and commentators, most of whom still seem to be getting their heads around the possibility of its being art. That it might be pioneering art is clearly taking a step too far.

In terms of more overt political art it wasn’t long before Wahine Toa - women of strength - emerged to occupy the pae pae with the most direct and ferocious stances, Robyn Kahukiwa being the first and remaining the foremost. No one could question her focus and commitment even if, at times and with respect to the Western tradition, her imagery seems more illustrative than painterly, but as US art writer Andrea K Scott wrote recently: “Political art often sacrifices nuance to urgency.” (1)

Her magisterial panoramic painting from 1996 Nga Tipuna Kei Mua Ko Tatou Kei Muri (The ancestors are in front, we are behind) - 2.2 m x 6.2 m - dominates the show and is a formal masterpiece depicting the warp and weft of time and history. Formalism, of course, is of not much of a primary interest for her, but this work demonstrates unequivocally - perhaps more than any other in her oeuvre - her ability to marshal successfully into pace and continuity very complex imagery. However, what motivates and sustains this highly significant work is the accounting of a political artist’s personal whakapapa, within the architectural conventions of the customary whare whakairo (carved meeting house), the physical manifestation of the body of a specific ancestor. (2)

Standing on the shoulders of ancestors is a frequently cited acknowledgement, and the other four artists in this show fairly have this relationship to Kahukiwa, inspired by her achievement and fired by her example. Andrea Hopkins’ and Linda Munn’s work is most ‘like’ Kahukiwa’s in their narrative quality and their focus on land issues as symbolic of tino rangatiratanga, or self-determination (3). One of Hopkins’s three works is extremely pertinent to current political circumstances: entitled Jumping in the Deep End its accompanying label suggests the title “… highlights the issue of why some tend to benefit greatly from Treaty settlements, while others wait for the scraps outside those negotiations.”

Tracey Tawhiao has a secure history of protesting land issues through her art for nearly two decades, and her single work in this show, Waitangi Wrangle of 2015, reveals a more nuanced and complex approach but no less powerful in its impact. At every level of its material and symbolic being this work punches way beyond its physical weight.

Tawhiao has taken 21 fragile sheets of a tabloid newspaper - just consider the implications of the two words ‘tabloid’ and ‘newspaper’ in terms of the dominant culture’s reporting of land issues - and has done two things with them: one, she has whited out large sections, leaving words, phrases and pictures which highlight issues surrounding land; and two, on many she has inscribed her own words, phrases and customary designs (self-consciously referencing the ‘folk art’ tradition) which function as positives to ‘balance’ the whited negations. The whole is pinned to the wall (pinning: such tentativeness, so lacking in certainty!) in a pyramid shape - again, consider the pyramid in relation to dodgy deals - a construction which, formally, has a relationship to Julia Morison’s 1986 Vademecum in the Te Papa collection. This in all likelihood has escaped Tawhiao, but among the constituents of the Morrison work are lead, ash, clay, excrement, blood, silver and gold. Just add a few beads and a blanket and you’re home and hosed. For all its incredible lightness of being Waitangi Wrangle is a weighty, memorable number freighted equally by technical panache and determined anger.

Suzanne Tamaki has been revealing her metal for several years now, and like any of these Wahine Toa is not someone to be lightly messed with. Forget about beads and blankets; Tamaki’s the one with the axes. Her five-part photographic contribution, entitled The Treaty writing is on the wall, is a tour de force characterised by unrestrained wickedness - in both senses - searing humour and a forceful attitude of taking no prisoners. Each of the five images is set in a claustrophobic Edwardian parlour where five staged scenarios are played out by a cast of characters - lead by Tamaki herself - where domination seems to be the principal theme. Tamaki has a gift (or curse, depending where you’re coming from) for linking the political with the sexual which tends to cut out the crap when stating the real effects of power.

Reuben Friend supplies an unusually enlightening extended label which is worth quoting in full:

This series draws on Tamaki’s long-standing practice of dissecting the semiotics of garb - experimenting with adornment and jewellery as symbols of status, power and political agency.

The Treaty works delve into the Māori-Crown bi-cultural relationship in a way that no other artist has dared to explore. The works suggest a masochistic relationship between the Maori aristocracy and the working-class commoners - those with a deep knowledge of Māori culture and language, or with the pedigree of chiefly lines, wielding authority over the eager, on-looking servants with their desires for social and economic advancement.

At the feet of the Masters, devillish white-washed beings, adorned in union-jack styled loin-cloths and dog masks, nip at the heels of the ariki, the chief, devouring the crumbs left behind.

The work is astonishingly acute in the way it deals with the subject matter. It is a bold investigation that is visually and symbolically rich without being needlessly crass.

(1) Andrea K Scott, ‘American Beauty: the artist-activist Andrea Bowers takes her street-smart politics to Chelsea’, The New Yorker, 28 March 2016, p.12.
(2) This work appears to remain in the hands of the artist’s Auckland dealer. It’s an abiding mystery why this very major painting is not in Te Papa’s collection.
(3) Munn collaborated with Hiraina Marsden and Pakeha Jan Dobson in 1989 in designing the now well-known tino rangatiratanga flag.