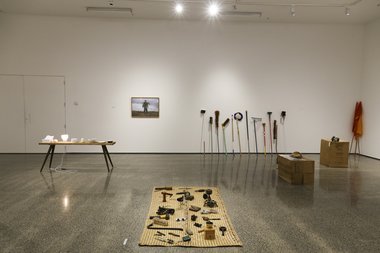 The main theme of Charles Eisensein's 'Sacred Economics' is the advocacy of a gift economy. In the fascinating Wikipedia article I've linked to, there is a lot of discussion about reciprocity and if gifting can ever involve no expectations of exchange. With Eisenstein the use of the work ‘sacred' is deliberate. He sees non-profitting, gifting activities as spiritual, forming bonding relationships that are sacred.

When I first heard about this exhibition (put together by Balamohan Shingade) I was seriously puzzled. The reason was because of the word ‘sacred’. It is something I personally equate with inner-worldly mysticism, and although I can easily connect it with one of these artists like say Brydee Rood, who seems to have a long interest in eastern spirituality, or Chilean Bernardo Oyarzún, in his ironic referencing in Space to Dream of votive fetishism, other contributors, like say Xin Cheng, I have always thought about as being preoccupied with non-aesthetic functionality (and sometimes ad hoc improvisation) using recycled materials to slow down wastage of planetary resources. In other words an area of practical research not necessarily linked to any form of religion, but more about eco-friendly problem solving. Concern for the planet’s wellbeing is not something I’d call specifically spiritual; it’s more pragmatic in terms of an ethos of sharing, cooperation and avoidance of waste - all for the survival of our (and every other) species.

What I didn’t realise is that Xin Cheng is an advocate (has led a reading group) for Charles Eisenstein‘s book Sacred Economics, a publication (now online) which besides advocating ‘degrowth’ closely examines the history, ethos and philosophy of money. The main theme is the advocacy of a gift economy. In the fascinating Wikipedia article I’ve linked to, there is a lot of discussion about reciprocity and if gifting can ever involve no expectations of exchange. With Eisenstein the use of the work ‘sacred’ is deliberate. He sees non-profitting, gifting activities as spiritual, forming bonding relationships that are sacred.

There is a traceable lineage in the ideas developed here, going back from Eisenstein (I think) through Lewis Hyde (The Gift, The Trickster) to Gary Snyder (Earth House Hold, The Old Ways), fellow poet and close friend of Allen Ginsberg (Planet News), an early advocate of a planetary consciousness. It makes sense that a poetry reading (writers responding to the works) is part of the Malcolm Smith programme for this show. It also brings to mind the two well known Jerome Rothenberg anthologies, Technicians of the Sacred and Shaking The Pumpkin.

The awareness of the earth as a totality is stressed in the double metal sheet (perforated) paintings by Sam Thomas made as a sign on a pole, draped with fake bananas and plastic icicles (as opposite extremes), and showing snowy Himalayan mountains abundant with Pacifica tuber fertility gods floating in their midst.

Philippa Emery’s contribution is a set of handmade gifts (bowls, lampshades, candle holders, plates) the artist has personally crafted for six close friends or family members, and positioned on a low bench with a brochure explaining her philosophy of unique, very individual presents imbued with her physical touch.

Though known in Auckland for his colourful contribution to Space to Dream (an Andean tourist goddess covered in cell phones and luxury good shopping bags), Bernardo Oyarzún‘s participation in this show is via a woven flax mat covered with various tools and implements visitors are invited to take (and return perhaps after use). Entitled Minga, the Spanish word means voluntary communal labour, co-operative work.

Xin Cheng (remember her contribution to Freedom Farmers?), Chris Berthelsen and their companions use ten large cardboard boxes as plinths to place instructive reading material and use the walls for displaying improvised, communal problem solving using recycled discarded ‘rubbish’. Casual and determinedly non-aesthetic, the resulting functional sculptures nevertheless have an identifiable Xin Cheng look, and bear close scrutiny as you try to figure out the logical underlying thinking.

Brydee Rood and Harpreet Singh’s leaning saffron flags seem to point to a symbolic pathway between secular and spiritual worlds while Rood’s two channel video consists of an interview with an English speaking ‘rainmaker’ in Indonesia. It is almost inaudible because of the accompanying torrential downpour.

Matthew Cowan‘s contribution to this show is through a documentary photo of a performance, two very entertaining videos, and a row of ten leaning customised long-handled brushes reminiscent of Frances Upritchard or Christine Hellyar. Through his videos he presents himself as a kind of chirpy clowning shaman interacting with or driving small tractors (not a serious one like the English artist Marcus Coates who often mimics animals, and wears skins and other body parts). Though his videos have a Kiwi ‘Fred Dagg’ flavour, Cowan’s dried vegetative attire is very ‘English’ in its referencing of corn dollies and plaited straw figures.

This is an extremely interesting exhibition, rich in complex thematic references, but it lacks a lucidly written take-home essay to make the implications of the brilliantly chosen work clearer for the casual visitor. Such a handout would assist Shingade’s and the artists’ labours in creating much more impact and discussion.

Thanks John. . . A little gift in itself, yr review goes well in inaugurating at least some kinda essay ...

Thanks John. . . A little gift in itself, yr review goes well in inaugurating at least some kinda essay for the exhibition. Adding, if I may, to yr Nth American references, there’s David Graeber’s recent book "Debt: The First 5000 Years".

But also crucial to note in this context is the French gift-line tracking back through Derrida and Bataille to Marcel Mauss’ seminal "Essai sur le don. Forme et raison de l'échange dans les sociétés archaïques/An essay on the gift: the form and reason of exchange in archaic societies", 1925. I heard on the grapevine that one of the working titles for the exhibition was "Magic Economies", in my view perhaps a better choice given Mauss’ writing on magical force as a kinda cosmological ‘technology’ of tribal life-ways, and more in line too with yr interesting comments on gift economies-as-praxis or ethos. But hey, ‘sacred’ it is, and this term works just as well in getting us into the territory these artists map so well.

In the eighties the Australian anthropologist Marilyn Strathern wrote the now classic "The Gender of the Gift: Problems with Women and Problems with Society in Melanesia", important today for the likes of Brazilian anthropologist/philosopher Eduardo Viveiros de Castro and American Roy Wagner (who, coincidentally, has written a book on Coyote the Trickster); and finally, one of my favourite texts on the gift economy (along with nomad hospitality, etc.) as key to solving problems of the commodity economy is Kojin Karatani’s Marxian-inspired and luminous "The Structure of World History: From Modes of Production to Modes of Exchange".

Either/or, it doesn’t make that much of a difference, but I figured Sam Thomas’ painting to be a copy of a detail of Brueghel’s "Hunters in the Snow".