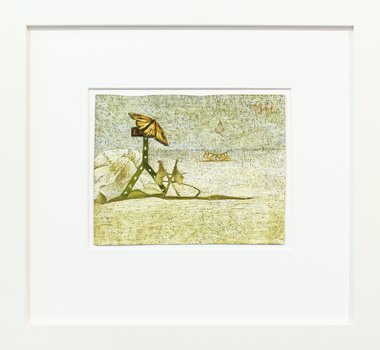 Shepherd's 'Monarch Butterfly and Meccano Construction,' 1980, an oil on canvas, and 'Still Life with large Adze and Pukeko Head,' from the same year, demonstrate that Shepherd reached his signature style and subject focus every early in his artistic life. The adze included in the work was something he found as a boy on the banks of the Waikato River. The paintings, both in their style and subject are steeped in history. While that history is personal, it also begins to touch things at a deeper level, taking in the wider parameters of the history of the nation.

Andy Warhol was a sickly child and spent months at home in bed reading comic books and staring at images of movie stars. He wanted to become one. It fed directly into his art just over two decades later.

New Zealand artist, Michael Shepherd, had a similar experience, though his imaginative play as a sickly child in Ngaruawahia involved an entirely different range of subject matter. The miscellany of objects he found in his parents’ garage—old bottles, cotton reels, matchboxes, war medals, photo albums, the dried skull of a Pukeko’s head and bits of Meccano—would be incorporated, much later, into still life paintings created during his stint at Elam in the mid 1970s.

It would put the stamp on his oeuvre for the rest of his career. History, the memory of time and place and the legacy left by each, would become Shepherd’s trademark look captured in his realist paintings, rendered in the style of the ‘Old Masters’. A major retrospective of his work is currently showing at Waikato Museum, curated by Emeritus Professor Elizabeth Rankin from the Department of Art History at the University of Auckland.

One wonders why this has taken so long, especially given the nature of the subject traversed which has much to do with the topical issue of New Zealand’s colonial history. Shepherd is now one year shy of seventy. It perhaps had something to do with the manner in which he delivers his material, in a style deliberately and meticulously ‘old fashion’; pre-Raphaelite in dark beige with variations.

Better late than never and applause for Rankin.

It is a comprehensive show that begins with works that use those things he played with as a boy in the garage: Beehive matchboxes, bits of Meccano and the Pukeko skull. His Monarch Butterfly and Meccano Construction, 1980, an oil on canvas, and Still Life with large Adze and Pukeko Head, from the same year, demonstrate that Shepherd reached his signature style and subject focus every early in his artistic life. The adze included in the work was something he found as a boy on the banks of the Waikato River. The paintings, both in their style and subject are steeped in history. While that history is personal, it also begins to touch things at a deeper level, taking in the wider parameters of the history of the nation.

The personal is reflected in a series of works from 1987, a year after his father died. Shepherd, deeply affected, revisited various childhood sites in the Waikato, randomly picking tuffs of grass and weeds from roadsides or river banks which would later be used as subjects in a sequence still life paintings. These humble grasses are presented like floral tributes that, like Paspalum or Puha, sees each portrayed in alabaster vases as singular and poignant witnesses to place and memory of the past—commemorating and memorializing a life once lived while at the same time giving a nod to the transience of it all.

Perhaps the artist had in mind the words of the Psalmist.

As for man, his days are as grass; as a flower of the field, so he flourisheth. For the wind passeth over it, and it is gone; and the place thereof shall know it no more.

Certainly when Shepherd shifts his gaze to wider historic subjects like Rua Kenana—the early twentieth century Maori prophet—those same sentiments and perspectives begin to take on another level of meaning for the artist, particularly after reading Judith Binney, Gillian Chaplin and Craig Wallace’s seminal work, Mihaia: The Prophet Rua Kenana and his community at Maungapohatu (1979). What the artist does is choose to paint an image of the reconstituted wall panels that were once part of the magnificent round meeting house at Maungapohatu.

The story of the brevity and ephemerality of it all gets played out here on a national stage, with all the sad and tragic political ramifications adding another layer to this shameful episode of New Zealand history.

The work, Rua’s Star, 1986, depicts in close-up the forlorn jumbled wall panels of the once grand meeting house—decorated with the symbolism of clubs and diamonds (initially appropriated from playing cards)—which become the utilitarian planks for another building, testimony not just to colonial stupidity and arrogance spiced with paranoia, but also to the evanescence of dreams and life itself. Shepherd has incorporated the comet/star from the gateway to Hiona, into the painting, a fragment of a beautiful if slightly bizarre and fantastic idea, fed by millennial visions once dreamt up in the Bible.

Time and its historic malefaction of building up and taking down is now the next subject of a major work, composed two years later in 1988. It is as if Shepherd were trying to construct some overview and pattern to it all, reusing some of the motifs he had employed in his earlier pieces. Time is a River without Banks. Time is a Dark Still Life at Ngaruawahia is mural in size, made up of 6 panels but divided into 3 sections. The world of Māori and Pākehā take up either end while the middle panel depicts the Waikato River.

In the title of the painting, there’s a touch of the philosopher, Marcus Aurelius, who writes about time as a river which carries everything away and repeats the process endlessly. Among other things, a case of military badges and a Meccano piece in the form of a plant displayed in a vase takes up the European panel while a carved manaia figure and adze are depicted on the Māori panel. This is Shepherd trying to make sense of it all against a backdrop of the relentless action of time and history.

The Waikato Landscapes of 1992, are inspired by and based upon early twentieth century postcards of the Waikato. In An Ideal Town for Piero della Francesca, painted in sepia tones and aping something of the Renaissance artist’s style, we see depicted the old Ngaruawahia hotel in period. Interrupting on the left of the painting is a disjunctive image, in a slightly different colour, of a former world; an image of the early pioneers dragging a huge log by hand across the land, no doubt a reference to the actual construction of the building. Here time is concertinaed to refer to the tread of history and, by implication, mortality itself.

Four years later the work of the Waitangi Tribunal prompted Shepherd to consider the problematic nature of interpreting historic documents. It resulted in the creation of a series of faux documents complete with stamps, seals and blurred text.

His fascination with local history morphed again in 2006 when his focus shifted to the preservation of New Zealand’s heritage. That saw him paint a series of archaeological digs, showing traces of early pre European occupation. The House beneath Te Rangi, with its excavated hole exposing a few slim poles poking up out of the ground, evokes a real sense of loss and forfeiture that speaks again of the transience of human life, hopes and aspirations.

However Shepherd also wants to remind us of the need for protection and memorialization of significant historic sites, something New Zealand as a brash young nation has not been good at. He provides a subtly scornful take on biased colonial heroics with The Exact Point von Tempsky Fell, represented by just a bunch of nondescript leaves on the ground.

In a more recent work the artist looks to the old world for exemplars of preservers of the past, and in a painting entitled, Commemoration (It was 70 Years Ago Today), 2017, he makes play with the famous album cover for The Beatles’ Sgt Pepper’s Lonely Hearts Club Band, after discovering that the drum used in the graphics was a genuine regimental drum. Rewriting the inscriptions on the battle clasps (metal bars) to commemorate the New Zealand Wars—Gate Pa and Orakau—he reminds us how others, perhaps more historically conscious, treat their past.

Trompe l’oeil is Shepherd’s standard modus operandi and he is the consummate performer. In an art world enamoured with the latest fashionable thing, this show is a reminder that the old ways can still pack a punch.

Long overdue, this retrospective exhibition, complete with family photos, mementos and a substantial catalogue by Professor Rankin, is an aesthetic delight and an impetus for prolonged meditation on matters historical and moral—to do with the great grand river of time.