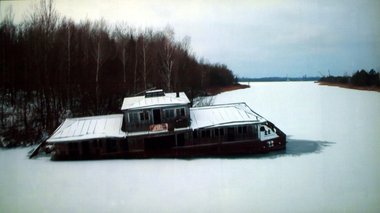 Four Pripyat residents return to the deserted city over winter, discussing their memories of 26/4/86 and the catastrophe affected the lives of their families and friends. They walk through the snow-covered ruins, visiting the sites of family homes, local schools, kindergarten, sportsground, cinema, indoor swimming pool, gym, fairground and pier by the river. It is visually haunting, unnervingly beautiful with the white snow and aerial drone shots. It is moving while also being packed with information.

This film, its adjacent installation of ‘wallpaper,’ documentary photographs, and a room reflecting on the history of New Zealand anti-nuclear testing protests, is centred around Mexican artist Raúl Ortega Ayala‘s (now teaching at Massey) series of visits to the abandoned city of Pripyat (once population of 49.400), located close to the Chernobyl nuclear power plant catastrophe that occurred in (then) Russian controlled Ukraine in 1986. This radioactive disaster, that the Russians desperately tried to keep secret, helped contribute to the collapse of the USSR in 1991.

Ayala’s first visits to the evacuated ‘Zone of Alienation’ (it has a 30 km radius from Chernobyl) were in 2013, when he began interviewing affected citizens and filming the collapsed buildings in the overgrown city. It is now safe to temporarily visit.
The Zone is an outstandingly visually impressive film, with consistently striking cinematography (Iain Frengley contributes) that starts with vertical pans of the Duga, a massive, scaffolding-like structure holding radar to detect any possible attack from American missiles—a Cold War warning device worthy of Doctor Strangelove.

Four Pripyat residents return to the deserted city over winter, discussing their memories of 26/4/86 and the catastrophe affected the lives of their families and friends. They walk through the snow-covered ruins, visiting the sites of family homes, local schools, kindergarten, sportsground, cinema, indoor swimming pool, gym, fairground and pier by the river. It is visually haunting (has great music by Tim Prebble), unnervingly beautiful with the white snow and aerial drone shots. It is moving while also being packed with information.

The term The Zone also wittily alludes to the New Zealand Nuclear Free Zone, Disarmament, and Arms Control Act 1987 that responded to the French government’s sinking in 1985 of the Greenpeace boat Rainbow Warrior, and the severing of NZ’s agreement with the US. It ties the film to the Bev Smaill Gallery in Te Tuhi now converted to ‘The Zone Archive Room’, a presentation of videos, sound recordings and historic paper ephemera (letters, maps, diagrams, photographs, newspaper accounts, and posters) that look at the NZ anti-nuclear (French tests on Mururoa atoll) protest movements and the consequences of nuclear disasters. A central vitrine looks at Aotearoa and Ukraine-split down the middle.

Linked up (but in a separate space across on the other side of Te Tuhi) is Pita Turei’s fifty minute film, Hotu Painu, a detailed look at the damage to the lives of the inhabitants of Mururoa done by the French nuclear tests. It is a separate project but seques beautifully into Ayala’s still alarmingly urgent cluster of presentations.

Outside the Smaill Gallery, and between it and the film-viewing space, are different sized photographs (some 1:1) of wallpaper Ayala photographed in a few of Pripyat’s dilapidated buildings, as well as shots of decaying rooms, and one spectacular image of the collapsed ruins of a large indoor swimming pool.

The most successful is the lifesized image of a doorway next to the entrance to the Bev Smaill Gallery, installed so the installation merges with the Te Tuhi interior. The Iris Fisher room leading to the film however, with seven differently scaled photographs, is more uncomfortable. The varied sizes and positionings seem awkward, mainly because of the harsh pale walls. Their unsettling nature—as uneven components in a room where the main attraction is the huge swimming pool image—could well be intentional.

In their own right, these extraordinary rectangular images (especially the 1200 x 1600 mm ones) remind me of Frank Schwere’s disturbing but very beautiful formal photographs of collapsing buildings (often ornate aristocratic mansions) in Detroit, that he exhibited nine years ago at Two Rooms (delapidation generated by different causes). Ayala’s images have great detail (such as old Ukrainian newspapers appearing behind the peeling wallpaper, and old fashioned, circular two-point power sockets), and exude tragedy as nature (in the form of spreading forest) takes over and eradicates ‘civilised’ history and attendant cultural traces.

Of course, whilst these are visually fascinating, and explore the concept of not entropy but cultural disintegration, the medical horrors that we don’t see in this show (as images) are made clear in the immensely lucid and interesting conversation presented within a free Te Tuhi publication which mentions the WHO report that reviews spikes in the number of cases of thyroid cancer, leukaemia, mortality rates, cataracts, cardiovascular disease and mental health issues. What we don’t see, but what we are told, is inexpressibly disturbing.

Raúl Ortega Ayala’s film is an amazing achievement, with lots of gifted people helping. Scary to the extreme it shows the Ukrainian people attractive as a race, so resilient, eloquent and hardy. It is also breathtakingly beautiful — gorgeous with the camera flying low over snow covered birch trees and apartment rooftops. Quite unforgettable.

For lovers of Eastern European history, this year's online NZIFF (https://www.nziff.co.nz/2020/at-home-online/films/title/#s) has a treat that showcases the USSR at its ...

For lovers of Eastern European history, this year's online NZIFF (https://www.nziff.co.nz/2020/at-home-online/films/title/#s) has a treat that showcases the USSR at its maximum influence, a 2 hr doco about Joseph Stalin's funeral, and the accompanying state-sanctioned mass hysteria. Made by Sergei Loznitsa, it presents a different world of seventy years ago, using Soviet newsreels and docos. Using only moving images (lots of huge crowds listening to speeches) and requiem-type music, 'State Funeral' is worth catching if Soviet history is your cup of tea.