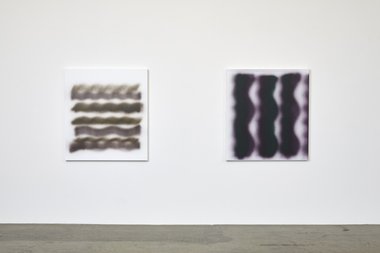 The dozen new paintings presented here by James Cousins are very different from the intricate, densely layered works he is usually known for, which draw you in close to the complex multicoloured canvas surface. These are nothing like that, airy fuzzy spray paintings on white stretchers that technically are reminiscent of Martin Barré lines structured along the vertical striped compositions of Bridget Riley. Like Riley they play with rhythm, while (in many cases) separating within each vertical module, left side from right, clinging to a central repeated core. You stand back to look at them. Unlike the earlier vinyl-masking works there is no real advantage in parking yourself real close.

Coming in three sizes—but with the vertical compositions large— these Untitled works languidly toy with tonally matched hues: black with dark grey, green, and reddish purple. Unexpected chromatic variations play ‘peekaboo’ within the colour of the dominant configuration which usually also exploits white negative space—mimicking the bordering positive components Walters-style. It is common to find sharp hard edges that contrast with undulating soft and fluffy ones, or alternating expanding and contracting swellings on stems, like those on the stalk of a plant.

Sometimes the vertical lines are organised in closely positioned pairs. They look oddly like ringlets of cascading human hair that is soft and crinkled, rendered through shape en masse and not through individual follicles. A group of these wavering bands can have a mixture of sprayed columns, some fainter and less tonally ‘solid’ than the others, or consistently repeated lopsided alignments at their tips that create a co-ordinated lurching impetus towards one of the sides.

Cousins‘ accumulated parallel lines are like hazy wrought-iron fences—drawn with carbon-loaded candle smoke—or blurry bead curtains, that you look through as well as across; hovering lines of smoke (floating in a wintery air) that you seemingly can push your hand through, wobbly vectors that are percussive musical ciphers. They traverse as well as plummet, dissolve or evaporate as well as congeal or solidify.

Other paintings are less regimented and less overtly linear: diffuse unsteady lines that in the smaller works sometimes come together to merge and fatten. Smudgy and unanchored, they like the vertical column clusters, almost always stop well short of the canvas edge. Seemingly quickly made they rely on spontaneous compositional decisions. Very occasionally crisply edged stencilled gaps bordered by parallel vertical drips occur, to be turned horizontal.

Cousins exhibits a lot of control with these paintings, for to keep the fuzzy edges he cannot use conventional stencils placed directly on the canvas, as they would flatten and sharpen the edges. (Perhaps the stencils are raised up, or he has some other method of guiding his moving hand so ‘diffuseness’ is maintained and yet tightly regimented.)

This is a refreshing show loaded with paradox and sly wit. ‘Casual’ speed is mixed with carefully considered preparation. The process looks rapid, but clearly overall is not the case at all.