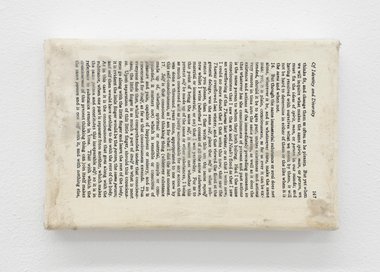 In his first dealer show, Shiraz Sadikeen presents a mixture of wall sculpture and intimate canvas / wall transfer paintings—all presented items indicating a deep cognisance of the interlinking relationships between ownership, power, race and class. Those salient but tight connections Sadikeen indicates can be unlocked through political knowledge and philosophical debate. Through a system of puns, symbolic materials and ironic alignments he provides a few ‘keys'.

In this, his first dealer show, Shiraz Sadikeen presents a mixture of (mainly) wall sculpture and intimate canvas / wall transfer paintings—all presented items indicating a deep cognisance of the interlinking relationships between ownership, power, race and class. Those salient but tight connections Sadikeen indicates can be unlocked through political knowledge and philosophical debate. Through a system of puns (eg. lock / Locke; fasces / faces), symbolic materials and ironic (ie. critiquing) alignments he provides a few ‘keys’.

Coming through the front door into the porch we encounter a tiny ink-transferred portrait of the great British Empiricist philosopher John Locke (1632 -1704). His visage is upright but a portion of his influential essay about knowledge (initially presented in nine volumes) transferred to a small canvas found inside, is on its side.

What is interesting is the fact that Sadikeen deliberately ignores Locke’s writings on the right to private property, something you’d expect him here to zero in on. Instead in this work he focusses on ‘Of identity and diversity’—a section from Chapter 27 in Book 2 of Locke’s fore-mentioned huge opus, An Essay on Human Understanding. He appears to be seeking out an opportunity to be ambiguous by coating it with surgical bone wax, apparently to stop its meaning from ‘bleeding’ into brand-new contemporised contexts. Rectangular tablets of bone wax are exhibited (with one missing) as well, as is a canvas, Laws of Form, again flipped. These are like self-referencing footnotes from an artist patiently explaining his strategy.

The dominant motif in this show (along with security window bolt-locks) is the fasces symbol of Roman power with its cluster of bound wooden rods and axe. Sadikeen mockingly transmutes this twentieth century symbol of right-wing terror into a cluster of bound incense sticks (ie. vertical lines of ‘smoke’) and impotent snapped-off broken key.

To each of these clusters—four are lined up along the main gallery wall—Sadikeen has added two extended security window bolt locks, one brown and vertical, the other white and horizontal. These ‘racially aligned’ locks (where the extended bolts are almost touching) can be interpreted as faces, each with its three circles of eyes and mouth in an inverted triangular formation. The white one has a reversed silver spoon protruding out of its mouth, as if an insolent tongue. At the empty container end the silver of the curved handle gives way to shiny brass.

As in his 2019 Geist show, Sadikeen enjoys working with the evocative power of simply constructed ‘primal’ faces to tease out complex (sometimes contradictory) interpretations involving racist insult. There are many similarities between the two shows, such as love of repetition and the look of ‘expressive’ art brut, or found bureaucratic images. The floor work Pile refers to both exhibitions, and suggests a vascilating abandonment and discarding of art as a commercial activity (note some paintings are portable stretched canvases; others are transfers on walls), while also having it available for purchase.

However this current show seems extraordinarily focussed and resonant, with all its cross references and complex conceptual layering that centre on locks, access and authoritarian control; hinting too at discussions about art commodification and art interpretation. Halfway between say Denny and Enberg (but with parallels to bridle, though without the whimsy)—less ambitious in scale, respectful of manuality as well as preplanning, and more mischievous (is Surf’s Up a tongue-in-cheek self-portrait?)—it is thematically very tight with a cynical (at times perverse) all-pervading wit, and a lot of fun to ponder.

Thanks JJ. That's a substantial piece of writing from Jerome. However I am surprised with his dour attitude to punning, ...

Thanks JJ. That's a substantial piece of writing from Jerome. However I am surprised with his dour attitude to punning, moaning on about parallel interpretation. So anti-pleasure.

As for Sarah's text about Shiraz: she is only doing her job, pumping up the work. That is what dealers are meant to do. He shouldn't take her so seriously. The artworld would be nothing without dealers.

Yes, John. I agree. Though I wouldn't describe Coastal Signs as a traditional 'dealer' gallery. Jerome's opinion doesn't necessarily reflect mine. I think his reaction to Sarah is in response to The Spinoff article, Town Hall zoom, etc.