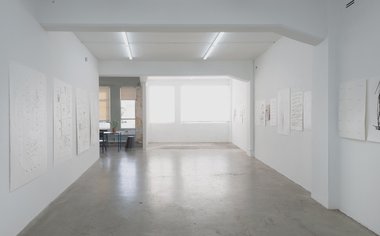 Or the drawings could fit in with the current zeitgeist, the artist being furious and alarmed at the disastrous state of the planet because of human greed and our species' refusal to search for an effective remedy in time. A likely possibility.

Often the surface activation of the white paper plane is done from behind, on the side of the sheet that is facing the gallery wall, so that the ‘mutilated’ torn textures are raised, facing outwards towards the passing viewer—and look embossed. Occasionally he has attacked the paper from both sides at once.

A few display penetrating pins, screws or nails that as ‘lines’ or ‘dots’ are suspended, embedded in their white surfaces. Perhaps the supports are undergoing torture. Or maybe are paper fetish objects absorbing an activating power.

Impossible to frame, put under glass or accurately photograph, these drawings are self consciously ‘expressive’, ‘raw’ and ‘emotional’ (particularly ‘angry,’ in ‘pain’ or ‘violent’) in their general ambience. They might be sincerely drenched in turbulent psychological intensity, or they may be just quoting often used techniques from art history. Stylistic enactments of ‘fury’. Frenetic manipulations of mood via readable signs.

As you’d expect with Robinson, whatever the ‘Grrr’ factor, these drawings are chocker in art history or pop culture references (like Lucio Fontana, Gustav Metzger, Jasper Johns, Rene Magritte, Basil Wolverton, and Leo Baxendale), wittily tying them into his long-term interest in the marketplace. And Psychology text book optical illusions too (Muller-Lyer) that indicate a love of ambiguity, where no meaning is ever singular.

It is possible that Robinson’s seemingly bad tempered mood is connected to the history of art and the discipline’s sense of direction apparently now evaporating. The show’s title Forwards Backwards seems to be about Art’s energy (its drive for innovation) running out of puff; the engine wheels no longer gaining any traction.

The drawings might also be about a search for spontaneity, and abandoning all pre-action rationalisation, attempting to sever the hand from the brain by avoiding planning. He might be slapping down the institution that employs him, regarding the intricate academic processes of wordy research that universities perpetuate as counterproductive and excessively turgid, blocking the pathways to genuine inspiration.

Or they could fit in with the current zeitgeist, the artist (like most people) being furious and alarmed at the disastrous state of the planet because of human greed and our species’ refusal to search for an effective remedy in time. A likely possibilty.

There is also a sense of the anti-ocular, an enthusiasm for visual indifference (or retinal hostility—even craving the ugly), where Robinson appears to be functioning blindfolded, energetically making (manipulating unseen materials) as if his head is in a paper bag.

The key question is whether this is all done cynically (while burnt out or tired) or made in genuine self-belief, attempting authentic exploration in good faith. Is it an exhausted nihilism by rote, or something driven by the motivation of feasible discovery—or else that other possibility: propelled by righteous anger about the planet’s probable demise and letting off steam?

Perhaps claiming such ambiguity for Robinson is far too generous. Is the show coming from a love of bored apathy—hinted at by the works being lined up indifferently and close together on the walls (for this artist an unadventurous presentation)—mocking the audience but making the right visual avant-garde ‘noises’ and feigning the creative act; or is it instead an exciting (but very risky) way of snatching at passing ‘flies’ of profound insight passing in the air, trying to grasp something genuinely interesting that seems solid but which is always evaporating, dissipating like drifting smoke.

These contradictory mindsets cannot co-exist, but of the two, Robinson is clearly attempting the latter with his recycling of not-quite-dead-yet twentieth century avant gardisms that still startle within a wider quite conservative scene—and which continue his art commentaries that first appeared in the early nineties, on the selling and promotion of Aotearoa’s complex and fragmented art culture.