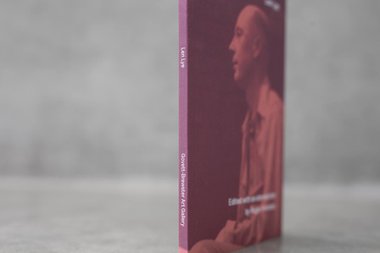 Urged on with his writing his friends Robert Graves and Laura Riding, he loved collaborating with his mates. Whether recalling eidetic childhood memories, or describing creative acts on the spot as they occur, Lye's fixation on sensation and stored or released energy we see here to be linked (as you'd expect) to his exuberant films, kinetic sculptures, photograms, batiks and paintings. The poems are selected from the five volumes of Len Lye writings published so far.

Edited with a substantial introduction by Roger Horrocks
With small drawings and b/w photographs
Paperback, 76pp

A thin pocket-sized publication for reading on the train or in a dentist’s waiting room, this portable sampler (with little illustrations) has Lye biographer and anthologiser Roger Horrocks broadening the Lye material offered as poetry, now in his selection cleverly including some unorthodox portions of essays, spontaneous notes or short dissertations that capture Lye’s imaginative ways of word choice and juxtaposition.

Continuously flowing (paragraphed) prose poems and discrete vertically dropping line clusters are happily mixed by Horrocks, so Lye’s exhilaration at the bodily processes of something even as common as writing or drawing—its muscularity, the weight of the limbs, yellow-paged pad and sound producing nib—are emphasised; highlighting the materiality or physicality involved.

Urged on with his writing by his friends Robert Graves and Laura Riding, he loved collaborating with his mates. Whether recalling eidetic childhood memories, or describing creative acts on the spot as they occur, Lye’s fixation on sensation and stored or released energy we see here to be linked (as you’d expect) to his exuberant films, kinetic sculptures, photograms, batiks and paintings.
They are selected from the five volumes of Len Lye writings published so far (that Horrocks has edited)—most written in the forties—that often cross-connect.

For example, there is a marvellous image of himself as I’ve described above, drawing with a pad on his knee and his wonky hand holding an even wonkier pencil—with the drawing rendering an x-ray version of the inner bone of his supporting right leg.

Positioned on the opposite page (p.40) is a poem about the meat in his limbs that parallels the salient constantly-moving elements of the earth’s body:

to reach the taut skin
of my know of you

I have to stop writing to feel it in me as the enjoyment of sitting and feeling a good weighted leg across the thigh near the knee on top of the other and the bread-board on the slope of the crossed leg’s thigh with the left-hand’s fingers holding the plain yellow notepaper, and the pen-nib ink flowing on it as the nib makes a pleasant rubbing sound on the sounding board of the bread-board and I can feel its vibrations transmitted to my thighbone and I’m dealing with sensation….

On the righthand page is A Feeling for Motion:

When not observing motion I feel it in my actions…There isn’t a motion that one cannot isolate and feel in relation to one’s own solid body.

Another work, How to Write a Poem, is about commitment to a necessary promotional task that artists often do, within maximum comfort. A cup of coffee and a pastry are needed close at hand.

Get a brioche in a small white bag and go to a café, and while waiting to order an expresso, put the brioche in its thin wax paper on the table, flatten out the bag, find a short 5 inch pencil (in hip pocket), and write a description of the painting Land and Sea…

Order expresso (at last! busy) and conclude the writing.

Horrocks has divided this sampler mini-anthology into four sections: Myths and Dreams (prose poems that relate to the ‘Old Brain’ narrative threads underpinning Lye’s visual imagery); Moments (snippets of prose explanations or expositions); Experiments (wilder discussions referencing art history and his own activities); Later Poems (a couple of works from around the end of his life in 1980).

And while his awareness of the avant-garde writing of Stein, Riding, and Cummings is plainly evident, this book showcases Lye’s personal writing idiosyncrasies: the joyful ‘leaping about’ nature of his texts as if they are his body—the way they look on the page, their acoustic qualities when read aloud, and the synthesising of juxtaposed (once disparate) meanings that run parallel to his evocative moving and static images, drawn up from his ‘Old Brain’ subconscious.

For long term Lye fans this little book will remind them once more of his magic with words and how language was just another material for him to expertly play with. For those not familiar, it is a great chance to have his written voice at close hand for easy access. So easy to delve into and explore. So rewarding. Twelve bucks only.