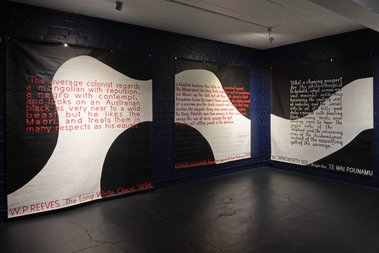 'Horse and Buggy Days' (1999) presents the four canvas texts (three settler, one Māori—though that is assumed, not stated) with their prose spread across dominant white bone shapes or cow hide patterns. The two pairs work internally as foils, A playing off B, C playing off D—looking at dismissive racism and unrecognised depth of expression, sensitivity and empathy.

Downstairs in the cool brick-walled Michael Lett basement we have three fascinating works from Jim Allen—dated 1999, 2009, and 2011/2014—that highlight questions of interpretation by way of looking and reading.

The earliest is a suite of four historic texts transcribed to unstretched canvas and presented to be read and evaluated; the second is a vertically elongated collage of a facially flayed Hermes messenger with winged shoulders and ankles; and the third and most recent is a b/w video with a raspily read-aloud text (interspersed with installation images) randomly constructed like a Burroughs/Gysin cut-up.

With this sequence of works, one feels Allen starts by attempting to tightly control interpretation of four large texts on loose canvas through the gallery blurb sheet; then loosening up a bit with the collage (only a little, he sets out a p.o.v. in a discussion within his autobiography The Skin of Years); and in the video, fully embracing letting the viewer /listener take over control of meaning found in phrases from quoted texts that are cut out, split, shuffled around, and recombined.

Horse and Buggy Days (1999) presents the four canvas texts (three settler, one Māori—though that is assumed, not stated) with their prose spread across what can be seen as dominant white bone shapes or heavyhanded cow hide patterns. The two pairs work internally as foils because of the colours of the fonts: A playing off B, C playing off D—looking at dismissive racism and unrecognised depth of expression, sensitivity and empathy. Where perception of character goes badly awry. Where glaring contradictions perhaps are overstated. You can read the texts yourself from the photographs with this article.

The complicated collaged image of Saboteur (2009) was originally shown with Hanging from a Thread II in Michael Lett in 2009. It seems to be about masculinity, the angelic Mercury figure standing in front of a pink phallus, and packed with references to Freud, the life of Jesus, and the histories of art and philosophy. Severed tree stumps (symbols of castration, or eco disaster) abound at his feet, having made their way down from the saint’s crotch, from the small Greek temple he is holding and a burning candle emitting the light of reason.

In the background, sections of glued on comics depict the jumbled-up actions of brainless alpha males. Cradling his symbol of rationality, no longer virility, the messenger is sabotaging emotional reflexes that trigger masculine aggression and violence.

Sited in the gallery at the bottom of the stairs, the video of Uncertain Propositions (2011/2014) can also be seen with this link. Allen’s hoarse and wheezy voice dominates, accompanying 5 times repeated image sequences from the Rio installation of freestanding sculpture (2012) that he presented in The Skin of Years exhibition, mingled with various historic settler quotations that plan clearing the vegetation and bringing in cattle, spiels from immigration brochures, and landscape poems that he also sliced up and recombined (we see it on the wall) into the soundtrack: disjointed lines of wonky half-coherent (but hypnotic) prose. It seems propelled by sarcasm mixed with mischievousness. Plus curiosity about unusual word combinations.

Allen we see nervously peering out through a slot—while reading his seemingly nonsensical poem—as if he were exhausted and in a besieged tank or pillbox. Waiting for an attack from the sea. We are left wondering: is he being ironic, or is he attacking reason and the earlier sentiments of Saboteur (as I’ve interpreted it)?

These complex and contradictory resonances come from the three works being selected by the artist, decontextualised and brilliantly presented together. This fabulous show is well worth seeing, so you can ponder how all three rub off onto—and affect—each other.