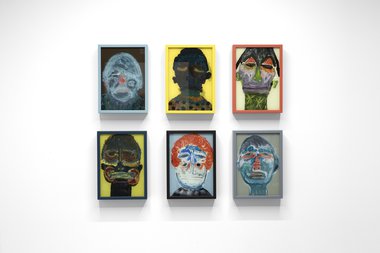 Their dishevelled and beaten visages—faces almost scrubbed out in some instances, crooked mouths, goggle eyes and variously distorted features—put them on the edge of caricature. As such, they make up that morbid preoccupation leavened with the comic that has the capacity to remind us, in careful measured doses, of the futility of it all. Just what's needed in times of national and global calamity.

In these Covid ravaged times, this might sound counter intuitive, but unhappiness sells. Just visit the Laree Payne Gallery in Hamilton and bear witness to the sold-out show of the latest works of Auckland based artist, Hannah Ireland. Entitled, I’m Just a Spectator, it puts the artist at one remove from her subjects, cataloguing with a certain measured aplomb, the men and women who appear on glass (her support) and who each seem to be living the life of the miserabilist.

The roll-call of sad, almost clown-like faces, reminds one of Emil Nolde with their cheesy exaggerated smiles/grimaces together with the loose impasto brush work in the expressionist mode of the early twentieth century German Movement, Die Brücke. But unlike her counterparts, Ireland does not appear to have the same social agenda that was driving those gloomy north European young men in the heady days of revolution. Certainly not with melodramatic titles like I cried all this summer away. Sounds more like teen angst sobbing inside some 1950’s cry baby pop song.

So what is Ireland up to? Is this pastiche for the post millennials, full of quotation and taking the piss for a generation done with ideals and on the slippery slope to pessimism? Has the artist been reading Wendy Syfret’s, The Sunny Nihilist, How a meaningless life can make you truly happy?

Any glance at these melancholic glum faces with their over-the-top bloodshot eyes, forced smiles and woe begotten demeanours is enough to make one laugh, and perhaps that is why they have sold like hot cakes. A little bit of black humour in these dark times goes a long way.

Their dishevelled and beaten visages—faces almost scrubbed out in some instances, crooked mouths, goggle eyes and variously distorted features—put them on the edge of caricature. As such, they make up that morbid preoccupation leavened with the comic that has the capacity to remind us, in careful measured doses, of the futility of it all. Just what’s needed in times of national and global calamity. You gotta larf. This is Theatre of the Absurd, 2022 style.

The first work in the exhibition comes with the unsuspecting, innocent and banal title, Morning Coffee. But it is a grotesque image of an almost skeletal figure embracing a woman, which immediately calls to mind, Edvard Munch’s Death and the Maiden (1893). Ireland’s version has the couple flanked by two dark and slightly menacing figures looking as if ready to escort someone away to perhaps far off inglorious climes. And yet there they are dressed up in a kind of harlequin outfit, like two anonymous but intimidating jesters. Morning coffee never looked so unsettling and yet so droll. It turns out to be a sort of postmodern Last Supper. Almost Monty Python and “the man about the hedge.”

Death. There’s a lot of it about, and one has to find a way to deal with the reality. Hannah Ireland has tried dark comedy, and done so successfully according to many satisfied customers.

Ironically the one painting that comes closest to the bone, so to speak, is the only work that has not sold. Sometimes the blackness can outshine the ameliorating effects of the humour. In Slow Dance, the image depicts a young girl (perhaps three years old) holding a very large birthday cake with dribbles of paint cascading out from the bottom, like extended globular tears. Above the girl, inside a string of diamond shape bunting flags, are written letters that make up the word ‘happy’, but configured randomly and back to front. Too poignant and near the knuckle perhaps, for sale.

This is an interesting, and as it turns out, timely show, which sees the artist revisit the past for her style and material—applied to our contemporary disorder, where we are all somewhat hapless spectators to the merry dance of the human condition.

omg this piece annoyed me so much. first offense: "in these covid ravaged times". cliche, shut up! think bigger. Also ...

omg this piece annoyed me so much. first offense: "in these covid ravaged times". cliche, shut up! think bigger. Also using entitled instead of just titled — why? obnoxious. im renowned for ripping apart vaguely feminist, navel gaze-y art but ur jokes are badly constructed, they feel like family guy-esque non-sequiturs – which isn't charming. also this post-millennial frame is so weak, you're clearly deeply disinterested in the gen z psyche, it's like why even write about this show? the sunny nihilist is not an extremely popular book, you can't just name any book without any further context and act like it's a substantial comment on ireland's practice. you age this text by talking about what has sold and what hasn't AND it's such a basic embarrassing point. this is lazy.