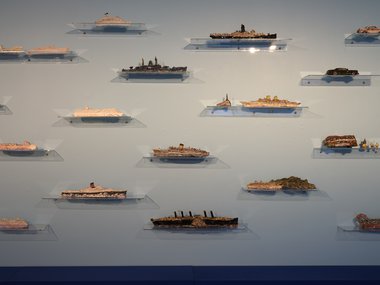 The maritime-craft, motor vehicles, cranes and buildings I think are the most successful sculptures, having a recognisable immediacy and geometric exuberance (exuding the delights of hand-manipulated clay), with the variously sized figures the weakest, possibly because of the complexity of the human form, even when reduced to an elemental cipher.

‘Outsider Artist’ is the title of the informative video displayed with this beguiling ceramics exhibition. However, there is a good argument that that marketing caption is misleading, that the late Robert Rapson, instead of being ‘against the tide’ as the show’s title states, was as mainstream as any other visually skilled ‘creative’, being highly articulate both verbally and with clay (despite not being tertiary trained), not living hospitalised within an institution, successful in a sector where many ceramic artists are enthusiastically embraced—and in terms of undulating expressive wonkiness, the equal of say, stylistically similar painters Malcolm Morley and Chiam Soutine, or papier mache sculptors Red Grooms and Claes Oldenburg early in their careers.

Rapson (a Wellingtonian much admired here and overseas) was mainly known for his richly decorated ceramic ships, but here we see his passion for also making cars, animals, figures, landscape vistas, buildings, jugs, rockets and cranes, in approximately a hundred pieces spread along a wall and on four plinths.

This wonderful (quite compact) touring show was organised by the Dowse in an attempt to spread the word about his talent, but I’d argue the word was out anyway. I can remember being thrilled by his boats on previous occasions in Titirangi. There is a loosey-goosey feel to his form construction and glaze application that is infectious. Some works here are uncompleted and demonstrate stages in his methodology; nevertheless they still demand close viewing.

Initially he created long half-boats, relief sculptures with a flat side so that they could be placed against a wall, Then he moved to works where the whole ship was on display as a freestanding object. That could be viewed from all sides.

The maritime-craft, motor vehicles, cranes and buildings I think are the most successful sculptures, having a recognisable immediacy and geometric exuberance (exuding the delights of hand-manipulated clay), with the variously sized figures the weakest, possibly because of the complexity of the human form, even when reduced to an elemental cipher.

There are also a few wildly loose landscape vistas on standing crescent-shaped flaps of lumpy baked clay. I’m not sure they are always successful either, but it is an admirably inventive idea for a pictorial presentation. I admire the daring of his eccentric formats, the fluid painterliness of his mottled thin acrylic paint on curved baked rock-hard surfaces.

The show is accompanied by the excellent video mentioned earlier, with a great interview with the artist (while looking at the Port of Wellington and the harbour wharves he loved visiting, his travels, reference books, clippings and the ships that inspired him), and helpful comments from exhibition entrepreneur, gallerist, artist and curator Stuart Shepherd, and Richard Benge of Arts Access Aotearoa.