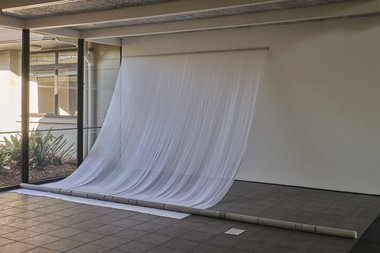 The emissions issue seems to be the main motivation for this ambiguous installation: a metaphorical 'concrete' wall with a 'liquid' sheet bursting through it. The represented wall is deemed no longer effective as a barrier, because it theoretically worsens what it is trying to prevent. Yet a concrete wall is a better solution in times of crisis than no concrete wall, if no suitable replacement material is available.

In the Te Tuhi Project Space—with Deanna Dowling’s presentation—we see sections of a specially concocted narrow concrete cylinder cut into portable sections, lined up on the floor and weighing down the edge of a rectangle of thin cotton material that extends as a drooping parabola to high up on the dominant wall, its other end fastened by a thin horizontal strip of concrete.

It is an in situ installation that contemplates the pollutive damage in the environment (sea and air) caused by concrete, and certain unorthodox principles of homeopathy. The delicate white fabric might seem to function as a symbolic filter, and the solid anchoring concrete ‘pipe’ is apparently made from a diluted cement mix made from seawater carrying concrete particles and aggregate in suspension. (Collected from in contact with a concrete wall. The wall may have no concrete in suspension. That is what is stated. See below.)

By want of procedural explanation, the paper handout for this puzzling exhibition is less focussed in its explanation of logics than the critical aims stated more clearly in the online blurb. The two to me seem at odds.

The former appears to use variations of sympathetic (‘like cures like‘) and contagious (‘Water holds the memory of substances even in the absence of the active ingredient‘) magic—mixed in with probability theory. The latter looks at concrete’s damage to waterways and its contribution to carbon dioxide emissions.

One particularly interesting point that Dowling makes is the circularity of a common response to climate change, that building concrete walls to counter the rising tides from melting ice in fact adds to the problem. Concrete use is linked to 8% of the world carbon dioxide emissions, more than double that from flying or shipping.

That seems to be the main motivation for this ambiguous installation: a metaphorical wall with a ‘liquid’ sheet bursting through it. The represented wall is deemed no longer effective as a barrier, because it theoretically worsens what it is trying to prevent. Yet a concrete wall is a better solution in times of crisis than no concrete wall, if no suitable replacement material is available.

The work has a lot of connections with the Susan Schuppli film on Canadian ice core collecting recently shown in Artspace Aotearoa. The big difference is that one is rigorously scientific, the other impressionistic or poetic. One is a film about looking for chemical and particle traces in ancient ice. The other emphasises the pollution of seawater through the presence of concrete.

This latter presence—as indicated in the sculpture by the use of diluted concrete—while symbolic seems irrational, especially if concrete in diluted or ‘memory’ form is proposed to be a partial cure for climate catastrophe, as though it could be an effective part of an inoculation process throughout the oceans.

Maybe as a gesture, Dowling—with the wisdom of Canute—knows this exercise is futile, that it is only a fanciful gesture to entertain the art community, and that her sights are really set on conversation around concrete as a material, and not seriously about the demonstrated process as a remedy.