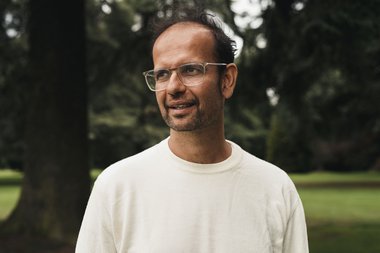 Usually in this performance, when in pairs, one person concentrates on the singing and the other on the moving. When three are involved, normally two do the singing. With both male and female performers there, it is easy to discern the people singing the different parts. Sometimes when in threes, individual performers get up to wander off, take a break, stretch their legs, and come back. The performance runs continually from ten in the morning to five in the early evening.

What a great idea to have Tino Sehgal do a performance in the mezzanine of Auckland Art Gallery, by the huge front window. Last time he did something in Auckland was when he was part of Natasha Conland’s Last Ride in a Hot Air Balloon triennial. At St Paul St in 2010, he presented Instead of allowing some thing to rise up to your face dancing bruce and dan and other things, 2000. That work referenced Bruce Nauman and Dan Graham and nodded to the movement on the floor of those artists during performances documented on their videos.

Yet Untitled, 2013, the Sehgal work currently being presented daily for six weeks, again focusses on the movement of two or three dancers, but this time much much slower and incorporating sound: language-free vocal music unaccompanied by instruments or percussion using the body. Music that is consciously physical in its emphasis on the oral. Most of it is very soft. In the echoey gallery space you have to strain to listen carefully.

Around the performers are eleven flat seats and seven sculptures on plinths. Four bronze busts and three abstracted or realistic marble or stone figures. Those unidentified sculptures from the Collection are important. Like them, Sehgal’s work is now part of the Collection, but for only six weeks. The sculptures create an ‘audience’ for the performers when no visitors are watching. Being static and silent they also provide a contrast to the actions of the living bodies. Occasionally they also reflect the gestural actions of those bodies.

The gradual movement of the two women and one man (that was the combination when I visited on Tuesday) involves sitting, kneeling, lying, crouching, stretching, squatting or standing, slowly moving between those forms-and never touching. It is slow but not super-duper slow, not as demonstrated by performers like the legendary, originally butoh-based, Min Tanaka whose actions at one time (such as when I saw him in Sydney) were almost barely perceptible and required extraordinary muscular control.

Usually in this performance, when in pairs, one person concentrates on the singing and the other on the moving. When three are involved, normally two do the singing. With both male and female performers there, it is easy to discern the people singing the different parts. Sometimes when in threes, individual performers get up to wander off, take a break, stretch their legs, and come back. The performance runs continually from ten in the morning to five in the early evening.

The nature of the oral performances vary, being soft, intricate, and highly textured, but not dryly abstract. It is sensual, sensitive and rewards close listening, drawing attention to the performers’ lips, cheek, tongue, nose, larynx, throat and lungs. Sounds—not words or sentences—are used, but with melody. We hear tunes or traces of tunes, not sonic texts or lines of pure aural texture as with say Henri Chopin, Kurt Schwitters, Eklips or Makigami Koichi. The gentle singing can be rhythmic and percussive, and the only mimicry involved is that of copying horn players or occasionally drum machines. And the volume often increases.

To be more succinct, a form of scat singing is usually involved, but not solely. It is mingled with hummed or crooned melodic structures and a wider range of improvisational possibilities. With the male voice, the sound is closer to Bobby McFerren than Satchmo or Tom Waits; and with the female voice, closer to Aubrey Logan than Ella Fitzgerald or Cleo Lane. This is because we are hearing comparatively young performers with comparatively young bodies.

Because different parts of the mouth and throat are used, and differently flowing free-form structures, the sounds we hear are not always buzzy fricatives or puffy ejectives, but sometimes more amorphous and fluid—less pulsing and more continuous. This allows the singer to change direction and tempo, to surprise the audience and change the mood.

The kinetic and oral components are cleverly fitted together as a sculptural unit so that the paces of the different performers don’t clash. They watch and listen to each other carefully. Part of a cohesive very successful AAG mezzanine floor installation.