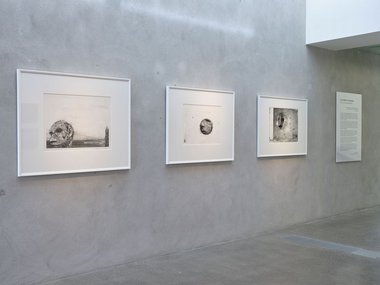 While both shows are highly allusive with their scientific references (the zigzagging Two Rooms linear meanderings could refer to Brownian motion or retinal tracking) the Te Uru exhibition in particular makes beautiful use of internal gallery architecture, exploiting the various nooks and crannies for maximum intimacy and surprise, delighting in hot and cold piercing colour, and showcasing the use of windows and skylights for daylight.

Two Elizabeth Thomson shows are on at the same time in Auckland: one at Te Uru in Titirangi (in the stairwell; Gallery 4; and Gallery 5); the other at Two Rooms in Arch Hill (in the large downstairs gallery). One is a shrewd selection by Greg O’Brien of different wall-relief image types: a much smaller version of the Aratoi-Wairarapa survey show; the other a suite of square landscapes based on blurred coloured photographs of dense luxuriant Titirangi bush but which look surprisingly painterly. The two exhibition titles refer to Thomson’s childhood years in the Waitakere region, and her temporary returning while an Elam student in the eighties.

Two Rooms on the other hand is about a Mark Tobey-type field of dense squiggles where glowing lines suggest moving edges of thin green windblown leaves—or occasional blue blurs that scumbled hint of sky reflected in splashing water; and other smaller rectangular close ups of the cellular structures of leaves and forest animal (gecko) skin and eye parts.

While both shows are highly allusive with their scientific references (the zigzagging Two Rooms linear meanderings could refer to Brownian motion or retinal tracking) the Te Uru exhibition in particular makes beautiful use of internal gallery architecture, exploiting the various nooks and crannies for maximum intimacy and surprise, delighting in hot and cold piercing colour, and showcasing the use of windows and skylights for daylight.

The great thing is that as a pared down (tightened) version of a much more expansive show, the three Te Uru galleries revel in being quite distinct viewing spaces, allowing the work to be at times brilliantly positioned by Greg O’Brien. A bigger exhibition in a more spacious institution I suspect would become unwieldy and full of tangential digression.

This is because the Titirangi iteration seems extremely focussed—even though rippling colours and the flickering translucency of water over sand and pebbles play a big role, water and reflected light being a dominant theme; not in Arch Hill where dappled and darting arboreal shadow is totally dominant.

Hundreds of multi-coloured moths (mainly Puriri) placed high on Te Uru’s curved staircase wall, whilst suggesting the mysteries of life hidden within the foliage of glistening native bush, paradoxically also bring out the best qualities of the Waitakere building’s internal surfaces and its embracing of natural illumination.

Some relief works though, like the flocked Ghosts IV, suffer from the excessive subtlety of their undulating ‘flattened’ convex/concave planes. Few clues are provided by the raking light, so the project (a version of a sandy seabed) becomes an over-clever idea where a cerebral investigation dissolves into something almost impossible to optically detect—being damaged by fiddly ideational overkill. Illusionism on a flat plane I think would have worked better.

My favourite works are less like optical or kinetic sculptures that a curator like the late Guy Brett might swoon over, and more involving of traditional skills like drawing (as with the early {less pristine, more illusionstic} etchings of beach scenes) or dramatic swirling linear gestures such as those found on the cut-relief panel of the recent Lateral series - Tracking /String harvest.

I enjoy the thin turning marks of her hand, preferring them to her other more industrial high-tech endeavours. I like their tense and compressed emotional power—the unanticipated smudges, the spontaneous bursts of feral energy—something in wild linear form she seems now overall to undervalue. Fortunately Thomson’s use of glassy transparent colour is also gloriously visceral. Its saturated intensity helps make this show a wonderful visit.