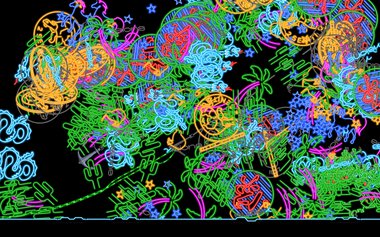 This video game has great appeal, even when not in motion with participating players. It is still visually and conceptually engrossing with its jumbled heap of piled up logos, motifs, coins and brands stacked to one side underwater, and waving chains with anchor-hooks from the two ships. All gorgeously glowing linear forms.

The highly imaginative, varied sculptures presented by Eddie Clemens at ST PAUL St Gallery Two consist of two moving image types (one interactive: a video game with a large screen; the other a floor-based glowing boot scrubber), and two sets of wall or window-pane reliefs. They all thematically focus on the Pacific kingdom of Tonga and some historical consequences of its geographic isolation. They spotlight its economic, cultural and communicative vulnerability.

By the gallery entrance Clemens has positioned Prototype Fibre-optic Boot Scrubber, a variation on his earlier well-known fibre-optic brooms, but now an eco-protection device for ensuring the boots and shoes of those who enter a country are cleaned of undesirable zoological and botanical contaminants. The fibre-optic bristles display a news item (visually abstracted but with lucid soundtrack) about the Duzgit Venture, a Turkish fuel tanker accused of accidentally severing Tonga’s undersea fibre optic internet cable in 2019 by snapping it through its dragging anchor.

Anchors play a big role in Clemens’ video game Resolution Venture, incorporating two such dangling images on swinging chains, seen on a flat black grid of 3 x 3 television screens. Designed for two players, each with a controlling joystick or ball protruding from a tortoise-shell carapace, the second competing anchor is suspended from the HMS Resolution, that Cook sailed in on his second (1772-75) and third voyage (1776-1780) which visited Tonga in 1773, 1774 and 1777.

The two anchors, representing two ships that threaten the wellbeing of Tonga, provide black humoured entertainment via the joystick controls—for they can be lowered and pulled along the seabed to hook the breakable communications cable. The first to create maximum cultural destruction wins. A vast range of colourful fiscal and internet symbols come gleefully tumbling down when the cable breaks.

This video game has great appeal, even when not in motion with participating players. It is still visually and conceptually engrossing with its jumbled heap of piled up logos, motifs, coins and brands stacked to one side underwater, and waving chains with anchor-hooks from the two ships. All gorgeously glowing linear forms.

The tortoiseshell motif also surfaces in the two versions of Tu’i Malila (First Edition, Third Hand), where animal and robotic life forms merge. A cybernetic carapace, with four prehensile Loc Line hose arms with alligator-clip claws, holds up an image of a 1967 two seniti coin in a display sleeve—the bronze shell a reference to Tu’i Malila, a long-living radiated female tortoise from Madagascar that Cook brought to Tonga and gave to the Tongan Royal Family. There are several seniti coins in the underwater imagery of Resolution Venture, with both sides on display.

On the walls, there are two versions presented of the mutant sci-fi tortoise creation. In one it seems to be humorously looking at a picture of itself, its animal side—as represented on the often unseen reverse side of the coin. It’s a secret narcissist. We also see in the second version, the other side, the profile of Queen Salote Tupou III. The tortoise-side work wittily nods to Untitled, the paired boats sailing into the big street-front gallery window, with the doubling and mirroring.

In Untitled Clemens has three pairs of receipt-sailed boats with paper spike masts, resting on turbulent plastic Anchor milk-bottle seas in the window. They are pretty funny because (from the outside and at a distance) they play with perception and reflection, hovering in, around and through the thick reflective, dark-tinged glass. You’re not sure spatially what you are looking at. The installation alludes to volatile matters like maritime trade routes, the exporting and importing of foodstuffs, the kingdom’s income earned and spent—and with the steel receipt curvy images: rolling waves and exchange rate fluctuation.

The contrast is vivid: two chromatic tactilities; two types of movement, island-bound (drenched in history) and thematically holding hands. A source of potential optical, spatial and cerebral pleasure for all who enter the room.