The Vagaries of Communication 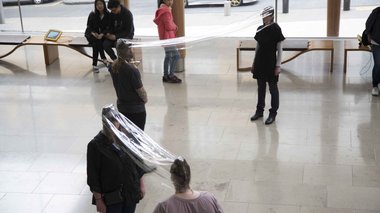 As a co-ordinated live activity, a casual spectator could have perceived it as a dada performance, each shiny plastic sheath seen as a strange drooping archway—of nihilistic significance, or espousing solipsism and isolation, or silent thought transmission maybe—propped up high off the ground by human torsos and legs that were mostly dressed in black.

As part of the (poorly publicised) AUT Symposium: Art & Performance that was being presented last Saturday at Auckland Art Gallery, this iteration of Skull Acoustics occurred in the North Atrium over the lunch break. Chris Braddock and Olivia Webb organised four pairs of participants to stand apart, their clothed bodies vertical in each set, their heads enclosed in horizontally linking sheaths made of transparent PVC.

By using the narrow inverted bag / long hood as a stabilizing device where their heads are tucked into the top two corners, each pair referenced the tradition of using the body as a sculptural material (in coordination with other components), as set up by the Austrian sculptor Franz Erhard Walther, and carried on by other artists such as Erwin Wurm.

This project specifically referred to a fabric hood Walther made within a set of objects called First Workset (1963-1969), which Braddock and Webb thought might be improved as an acoustic conductor through being made in plastic. They were inspired by an amusing story about the Queen being apparently alarmed at having her private conversations amplified by a plastic umbrella (like a satellite dish) to be overheard by reporters, and the notion of the participants’ skulls receiving acoustic vibrations—as opposed to their ears being receptors.

They were also interested in the Deep Listening exercises of the San Francisco composer and teacher, the late Pauline Oliveros, taking her ideas so that the two linked hooded performers—as a meditation exercise—hum notes sympathetic to the range of their normal speaking voices, and acoustically blend: the suggestion being that the plastic ‘scarf’ was a sonic conveyance.

With many keeping their eyes closed, and using humming as an inner centering device, some of the performers leaned back on their heels so that the in-between plastic sheath was taut. Others were more perpendicular in their posture, with the double-folded PVC being allowed to sag.

In the North Atrium however, with its polished floor, high glass windows and marble walls, the constant murmur of passing traffic and the ambient sounds of sauntering gallery-exploring families, the performers’ hum was barely detectable. Its role as an underpinning communal audio action was overshadowed by the visual positioning of the figures in relation to each other (as two stacked open vees), and the glittering texture of the wrinkled PVC; the resultant linear geometry seen best from above.

So what of unintended meanings, interpretations outside of the art-historical references articulated in the printed out symposium programme? As a co-ordinated live activity, a casual spectator could have perceived it as a dada performance, each shiny plastic sheath seen as a strange drooping archway—of nihilistic significance, or espousing solipsism and isolation, or silent thought transmission maybe—propped up high off the ground by human torsos and legs that were mostly dressed in black.

Perhaps it was also seen as something more overtly symbolic and community oriented. Maybe the plastic ‘bandage’ ‘wrapped’ around the opposing heads signified the potential benefits of two-way verbal communication. It might also have been interpreted as a comment on Mel Bochner’s famous 1970 artwork, Language is not transparent, playing off the clarity of the see-through PVC.

It was terrific to see Skull Acoustics occurring in the dominant foyer of Auckland’s main public art gallery. Naturally in such a location it was sympathetically received, for there was plenty of room to walk around the four ‘units’ and wonder about what was intended. A very gentle, extremely understated, provocation.