Hanging Paintings on a Painting? 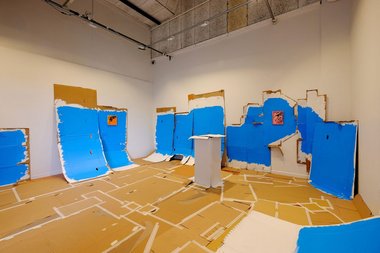 What one ends up with, however, is not so much a questioning of the space but an enjoyment of the abstraction itself—the way the tape defines square and rectangular forms, the way different shades of cardboard create subtle colour differentiations. Called 'Cardboard Structure (with blue and white)', even the title suggests all those pretentious appellations given to abstractions over the decades.

How many modes are there to slapping on and configuring paint to a flat surface in the abstract format? Let me count the ways. They are myriad and multitude. Kandinsky first set the movement in motion, though other contenders have risen to claim the crown - Hilma af Klint and Georgiana Houghton. Ever since, the practice has continued unabated. Now ubiquitous in the twenty-first century, it behoves any artist who is still mining this seam to come up with new and novel permutations.

One way to do this is to ignore the product and focus on the package. Auckland Art Gallery in Auckland with Necessary Distraction took that approach a while back. The gallery walls were no longer immaculate flat white pristine surfaces, but looked as if the builders had walked off the job halfway through—leaving the 4x2’s exposed. One could read into this a raft of contemporary theorizing. Deconstruction taken literally. Process exposed and the rest.

Ramp Gallery at Waikato Wintec has upped the anti and moved in the opposite direction—by adding layers rather than subtracting. The walls and floors of the gallery space have been covered, Dada-like, with flattened cardboard boxes, cobbled together in seemingly random bogan-like fashion to give the appearance of some kind of large homeless shelter. High art meets street grunge.

All sorts of ironies are at work here, some perhaps the artists didn’t intend. One of the paradoxes is that the cardboard matting, stuck together crudely with masking tape, competes for attention with the works hung on the walls, and in some ways trumps them.

Walking into this installation space has the feel of a Kurt Schwitter’s Merzbau. Hang on; it is an art work in itself! All this, of course, is about questioning the white cube gallery space. I’m not sure how many times one needs to do this, but Richard Maloy—with tape, card and blue paint—has done it again.

What one ends up with, however, is not so much a questioning of the space but an enjoyment of the abstraction itself—the way the tape defines square and rectangular forms, the way different shades of cardboard create subtle colour differentiations. Called Cardboard Structure (with blue and white), even the title suggests all those pretentious appellations given to abstractions over the decades.

Rather than ‘destabilizing’ my ‘negotiation of the space’, I was simply intrigued by it and then slightly annoyed as it interrupted my engagement with the paintings hung off it. It was like one large overwhelming work, working against and swamping the half dozen or more much smaller works placed over it.

There is synergy, however, in that the framed paintings of Kirstin Carlin, Judy Darragh, Johl Dwyer, Cat Fooks, Selina Foote, Peter Gouge and Saskia Leek—attached to the cardboard cladding—are themselves variations on the abstract mode.

There is plenty of refracted colour here; sometimes garish, clashing and discordant; or modulated, restrained and subtle; the full rainbow spectrum.

For my money, the Maloy ‘structure’ would have been sufficient enough, perhaps with empty frames dotted about the room. But then, how many times can one do that? It’s like, when does one stop ‘making’ readymades? How often do we need to make the same old point?

Still, an absorbing project that needs to be experienced at least once.