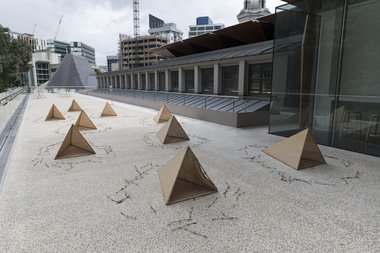 'Groundswell' is a wonderful opportunity for Auckland contemporary art lovers who are too young to have seen 'Action Replay', and a chance for re-evaluation for those older. It also should encourage flurries of new research in the (AAG's) E. H. McCormick and (city) townsite libraries.

It is an excellent idea to look at Auckland ‘conceptual art’ of the seventies, bearing in mind this city’s cultural importance as a touchstone and magnet for innovation, and pondering how the art scene nationally and globally became what it is now. Jim Allen’s role as teacher and artist here and in Australia is a crucial part of that, and so provides a skeletal structure for the show. It’s positioned on Level One and the outside sculpture court (on the top floor) overlooking Albert Park.

A large proportion of this consciously ‘art historical’ exhibition consists of typed texts, archived drawings or diagrams, and original photographs and videos documenting radical works of the seventies—through time now a fetishization of recorded representations—although there are some excellent recreated sculptures and and cleaned up films. It is not really about personal encounter with performative ‘liveness’ (although Hannah Valentine has contributed an iteration of Bruce Barber‘s Bucket Action) or the experiencing of the space and associative tactility of certain idea-based installations, though sometimes those interactions can occur. Many of the exhibits come from the personal archives of key participants such as Allen and Barber, now donated to the E.H. McCormick Research Library, and they radiate an attractive seventies visual aesthetic—albeit unintended.

Accordingly, as a densely packed look at ‘post-object art’, Groundswell usually presents its information in the streaky materiality of black and white video, high contrast photographs, and pages of serif-fonted, typed texts. Chocka with information about pedagogical aspirations (especially for Allen and Barber) and research and social processes, it looks closely at Allen’s influence as a teacher and artist, and the explorative climate he initiated and nurtured at Elam School of Art and Auckland City Art Gallery.

While there is no useful handout to guide you through the rooms—nor to prepare your thoughts via reading at home—the introductory time-line and wall labels adjacent to the exhibition’s entrance are particularly useful. They help provide a mental schemata for the meandering, mazelike sequence of galleries (starting with long parallel screens of black and clear plastic that come from Allen’s O-AR 2) that is initially confusing. The show is mainly about documentation—especially of works by the participants (Dadson, Barber, Lyons, Allen) in the AAG performance festival Four Men in a Boat (1974).

Groundswell only occasionally (with Maree Horner and Roger Peters) has the experiential magic of say Allen’s remade installations and performances presented at Michael Lett Gallery and ST. PAUL St Gallery a few years ago, and it is deliberately without the wider national sweep of the Action Replay survey which looked at seventies projects in the nineties. However it radiates something else. It showcases the encouragement of an investigative curiosity: different minds communally prodding the limits of what art might be, or—in co-ordination—what the world might be.

This sprawling exhibition proffers an abundance of archival material for you to sort though, and outside the show there is also much supplementary published material around in circulation—especially on Dadson, Barber and Allen. A lot of the actual exhibits are text, which all in one go is pretty exhausting, so you need several visits to methodically dip in. There is copious informational detail on the preplanning of work—but also much enigmatic, mysterious (even spontaneous and humorous) stuff as well: despite the common use of systems. It is not dry.

And you can easily see some of the influences (say, Dziga Vertov on Matthew McLean, Carolee Schneemann on Jim Allen), such processes essential for inspiring a climate of community research revolving around Elam and the then Auckland City Art Gallery. This vibrancy is captured in some wonderful videos from Spill, McLean, Hall and Allen.

Out of a very diverse pool of artworks, those that (for me) had the most vivid emotional impact were Matt McLean’s cleverly filmed and carefully edited video of himself cycling around inner city Auckland, Jim Allen’s documentation of his News and Poetry for Chainsaws performances (and his Arena sculpture in the outdoor sculpture court), Roger Peters’ sagging but swaying—and very dangerous—hot wire ‘breasts’, Maree Horner’s hilariously dysfunctional (and potentially lethal) diving board, and Hannah Valentine’s live ‘translation’ of Bruce Barber’s Bucket Action performed in the gallery atrium on a December Sunday afternoon. Hither-to little known Auckland artists not included in Action Replay (like Kimberley Gray and Malcolm Ross) were of special interest.

I tend to be attracted to simplicity over complexity, and so favour Fluxus-inspired immediacy over elaborate orchestration and comparatively convoluted performance/sculptural structures. Consequently, Matt McLean or Jim Allen’s solo works focussing on a core idea are preferred over (for instance) Kieran Lyons or Bruce Barber’s more complicated procedures. What is interesting are the discernable thematic (like bodily risk) or procedural threads connecting Allen with say Horner, Peters and Nicol.

This is an excellent show for exploring the influential innovative mindsets of forty years ago, a display bursting with ideas that still have relevance for the global economic scenario we find ourselves part of today. It’s a wonderful opportunity for Auckland contemporary art lovers who are too young to have seen Action Replay, and a chance for re-evaluation for those older. It also should encourage flurries of new research in the (AAG’s) E. H. McCormick and (city) townsite libraries.