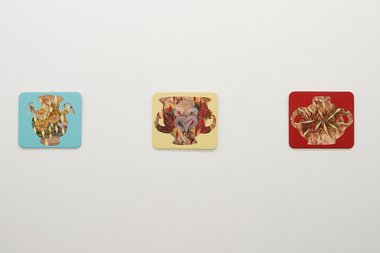 The 'Museum of True History (MOTH)' is an invention, a virtual museum, an ironic device: a repository of dubious artefacts which tell tall tales, without documentation, tales which might be true, half true, or complete fictions which are stranger than truth. The boundaries become a little blurred; part bogus, part stratagem for spinning counter narratives.

The Museum of True History. Now there’s a name to conjure with. As opposed to the Museum of False History?

In this country the narrative of the past has become a fiercely contested site. It all depends of course, on who is telling the story. History told by the victors no longer applies. Alternative histories, like alternative facts. have become common parlance today. There are other versions out there, other tales to be told through a different set of binoculars. And yet, in all of this, can one ever confidently claim to possess the “true history” at a time when truth has become a moist and slippery thing?

The Museum of True History (MOTH) is an invention, a virtual museum, an ironic device: a repository of dubious artefacts which tell tall tales, without documentation, tales which might be true, half true, or complete fictions which are stranger than truth. The boundaries become a little blurred; part bogus, part stratagem for spinning counter narratives.

Artist / museum director Karl Chitham has availed himself of this expedient before, to create in situ flimsy installations made of cardboard and found materials complete with lashings of adhesive and paint. They accompany ‘stories’ that strain credibility, and yet …

Here at Weasel Gallery, he has taken found vintage New Zealand placemats and doctored them, repainting—without obscuring completely the original prints of native flowers—in order to tell a story. The legend concerns a greedy Kererū and his escape from a nameless giant. In the process, the bird carries the life force (mauri) with him/her in order to hide it inside a collection of vessels. Thus we have the ‘true history’, vintage postcolonial style. Let him that readeth understand.

The first quartet of altered placemats present four vases, in silhouetted outline, that have in their shape, a distinct classical Greek amphora look. Upon the body of the vase he has superimposed an array of coloured diamond shapes together with either manaia figures or hei-tiki face carving. These are achieved without completely obscuring the original flower prints: Chatman Island Forget-me-not, Mountain Buttercup and Pohutukawa among them.

There is the slightest echo of printmaker, Marian Maguire, here with her juxtaposition of classical myth with colonial history.

In Ipu Kōpukapuka, blue diamond forms cascade down the vase like abstracted raindrops or perhaps tears. If the latter, they could refer to the Maori prophet, Rua Kenana, who at the beginning of the twentieth century, in response to the problematic nature of colonialism, set up an alternative community at Mt Maungapohatu. As part of his spiritual strategy Kenana appropriated diamond and club symbols from European playing cards. These were part of his cache of ciphers and cryptograms that became decorative and emblematic features placed on the walls of the two storied temple constructed on the mountain. This second ‘Moses’, leading the ‘Children of Israel’ out into the wilderness, to the holy Mt, was happy to avail himself of both European folk art and European religious stories in the process.

Chitham is perhaps attempting, at another level, to find a similar synergy, a way to fuse different cultural elements together, using folk art and traditional Maori forms in order to find a new story, one where mana can be restored, where both communities can discover common ground.

The work Nuku and Rauhanga, belongs to another facet of the story. It directly alludes to the thorny question of New Zealand national identity, one that raised its bony head during the flag debate. Chitham appropriates the spoof flag design that presented the kiwi with a laser eye, one which made it plain what most people thought about the tea-towel design versions that got the nod.

The second artist in the show, Emily Rumney, is a sculptor who has for some time been working exclusively with wood to create finely finished, delicately and exquisitely crafted wall sculptures, mainly in abstract mode. Her Veins present strips of thin wood, highly polished and hung on the wall, to collectively form what might be taken for long tailed bird feathers.

Core shows off her immaculate dovetailing carpentry that here gives a symbolic glimpse into what could be the inner substance and essence of the timber, with geometrics played out in flat 3D. There is a bird-like beak in the work, Lungs—or could it be a delicate leaf-like formation—complete with a dribbled stain across the surface of the wood that suggests the hint of a green landscape.

There is also Thinking Sticks, an array of small, different sized and coloured batons, rods, poles, stakes, some of which include touches of copper paint. Long, short, fat, thin, dark, light, wedged, square. What are they thinking? What are we to think? The answer, in the context of the show’s title, Nature Machine, is fairly apparent.

Chitham and Rumney, although exploring completely divergent paths with different methods of execution, nevertheless have light points of thematic and visual correspondence. An intriguing dual exhibition.