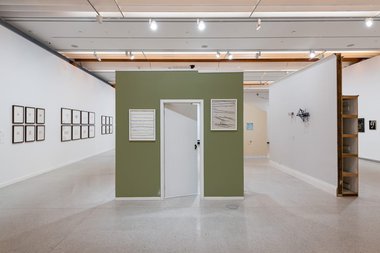 In his essay on Connor in the catalogue, Holte mentions as pertinent the groundbreaking 1974 Michael Asher project at Claire S. Copley Gallery in Los Angeles, where the dividing wall that separated the director's office from the exhibiting space was removed, so that social context was made visible as content. In the case of Connor reproducing walls from Rob or Sue Gardiner's private homes Holte has a point, as they are the ones who (away from the gallery) ultimately decide what is purchased.

Curated by Natasha Conland
Walls to Live Beside, Rooms to Own

Presenting sixty-three variously-sized works by forty artists in the Chartwell Collection, this architecture-themed exhibition looks at interior domestic /institutional spaces and their materialistic and political definition—in a sense an extension of Billy Apple and Wystan Curnow’s ‘Censure: The Given as an Art Political Statement’, or Michael Asher‘s exhibitions that focussed on social and locational context being inseparable from content.

Of all the presented ‘Chartwell artists’, Fiona Connor dominates this show. Her multi-unit commissioned project (a suite of sculptures) involves a ‘shifting’ of walls from collectors’ and artist’s relatives’ houses and their hung artworks, to the institutional space funded by the artist/patron represented on those walls; and those portable replicas being commissioned by the institution specifically for the ‘Walls/Rooms‘ show as temporarily part of the separate much larger collection linked to that artist/patron.

This highly pleasurable exhibition presents a diversity of practices that is highly entertaining, but there is—as stated above—an under-acknowledged ‘elephant in the room’. To baldly state this is not to say Rob Gardiner is a comparatively poor artist in this exhibiting company or that he is remotely ungenerous. Absolutely not: our visual arts community owes him a huge amount for his enthusiastic patronage, and he is an excellent artist. (I have often said so.) It is simply to say that there is a conflict of interest, and that Conland, Lacy and Connor have had a lapse in judgement. Or else they are unembarrassed, quite aware, and playing a game with their audience. A game that Rob and Sue Gardiner are in on.

It is important to note that Connor could have been a bit more strategic when presenting her sculptural walls in order to avoid these fraught and very knotty dilemmas. The problems of blurring the distinction between benefactor and selected contributing artists might have been avoided if she had, for example, made facsimiles of the paintings, like the walls themselves, exploiting some kind of distancing mechanism so that direct links to the benefactor’s hand were not visible—even if his mental processes were. This would have at least acknowledged there is a political/ethical issue, despite the difference in status between creators of works on show and the list of officially exhibiting artists (picked by Conland), where some of the former are subsumed within the exhibits of the latter.

Or, if she was so inclined, Connor could have a done a ‘Rauschenberg’, proclaiming like he did with Iris Clert, that these Gardiner works were Connor’s if she said so, but there would be no point in such transmutation, as their origin and exhibiting status is openly stated on the wall labels and in the show’s catalogue. That would have to be obliterated.

Also in that catalogue, where there is a third essay by Amiria Taumata on Tim Wagg’s examination of the selling of realty, Michael Ned Holte’s text on Connor hints that Gardiner is being rewarded for his significant support of, not only the visual arts community in Aotearoa, but also Connor’s own gallery, Laurel Doody, in Los Angeles—though that reason is not overtly stated. However there is a telling quotation from art consultant Kate Darrow discussing his empathy with artists and his self-education as one. I’m not disagreeing with Kate’s sentiments about his worthiness, but Rob‘s character is not the point here. The issue is about the appropriateness of curators and artists distributing rewards. Putting together exhibitions is usually driven by other more serious criteria.

In his essay Holte mentions as pertinent the groundbreaking 1974 Michael Asher project at Claire S. Copley Gallery in Los Angeles, where the dividing wall that separated the director’s office from the exhibiting space was removed, so that social context was made visible as content and the director and visitors were forced to interact. In the case of Connor reproducing walls from Rob or Sue Gardiner’s private homes in Auckland, Holte has a point, noting a parallel, as they are the ones who (away from the gallery) ultimately decide what is purchased.

However instead of the Copley Gallery, I’d like to suggest that Asher’s 1982 Museum Haus Lange and Esters project in Krefeld in Germany is more relevant, because there exhibiting walls were realigned and replicas positioned outside the building. Unlike Asher in 1982, there is with Connor in 2022 a suggested migration of artworks from scattered domestic spaces towards a centralised institution where a curated part of the collection is being presented. A reversal of Asher’s process. Through commisioning, walls from a fragmented and much wider spatial spread of sites become drawn together.

Many Michael Asher projects were motivated by curiosity around possible changes in the floorplan of the gallery or museum architecture, and rationales that might guide that. ‘What would happen if I...?’ seemed to be the engine that drove the planning of the altered structures, and I suspect Fiona Connor is little different with her work. Because Connor is knowledgeable and experienced, she is bound to realise such query-driven artworks will lead to articulated responses like the one you are reading. Nevertheless her contribution seems to be a naive wish to shine a bright beam on the role of the collection patron and the fact they are an artist themselves, but it is hard to imagine she does not grasp the damaging significance of her actions. (Holte writes about “Gardiner’s works slyly hitching a ride,” but Gardiner is not being furtive here; Connor is the initiating agent in control, assisted by Conland. And anyway, exhibiting artists are beholden to the best practice standards of the institutions that invite them, so Lacy, as director, is the one carrying the can.)

Albeit disturbing because of its compromising blending of roles, this elegant, troublng and conceptually complex exhibition is well worth several visits. Likewise, the informative and dense catalogue essays merit several reads. Together (because of all the issues—knowingly and unwittingly—embedded within) they should spark off lots of conversation. Heaps.

Guess the second part of the exhibition's title says it all: 'Rooms to Own'.

Guess the second part of the exhibition's title says it all: 'Rooms to Own'.