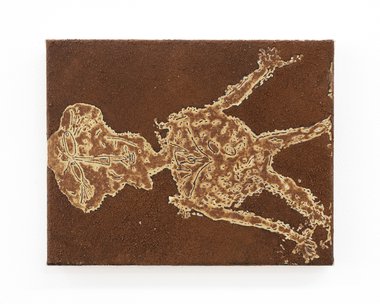 There is plenty of non-scatological or non-cosmic humour. 'Plume' refers to a Dubuffet painting of a man with a feathered hat, but like some other works in last year's show, Sadikeen's version is made of incense, rests on its side—its surface designed to be carried off in the breeze—and mind-blowingly, is a gorgeous contemplative image—yet it also could be decaying body.

The approximately twenty or so wall works (some of them tiny) currently being presented by Shiraz Sadikeen at Coastal Signs, are similar in visual mood to those in his previous shows at this gallery and at Samoa House. Besides alluding to ‘odds and ends’ in its title, the emphasis is on mortality, decay and the transience of all things. However, it is more disparate in its range than those earlier exhibitions. With perhaps more overt gallows humour.

Two good examples of the latter are a brown rectangle called Slab, referencing a mortuary table (in popular song parlance: a ‘cooling board’) and Geist, a cast section of what appears to be part of a human cranium. (It is in fact a jaw. Ed.) The latter is placed on a wall alongside smears of bone wax, used by surgeons to stop the bleeding of cut bones.

Five colourful rectangular canvases on the inner wall get your early attention. The bright red Surf’s Up is a sly (now grainy) ‘self- portrait’ courtesy of the Beach Boys, hinting at the artist’s own inevitable path away from the bodily sprightliness of youth. Glue Trap with its circular void, alludes to the perils of simple living, the many lethal dangers we all try to avoid on a daily level. It implies humans (if one is a misanthrope who doesn’t believe in the sanctity of all life) are no better than cockroaches.

The brown rubbish bag and white Hunters Spirit logos on canvas are terse acerbic post-colonial critiques, but Guts is very different. It shows the intestinal trajectory of food passing through a Ninja Turtle, a hilarious black on white mandala of faecal transformation, comically mixed in with fourteen spiraling sephiroth-like universes.

There is plenty of non-scatological and non-cosmic humour too. Plume refers to a Dubuffet painting of a man with a feathered hat, but like some other works in last year’s show, Sadikeen’s version is made of incense, has no hat, rests on its side—its surface designed to be carried off in the breeze—and mind-blowingly, is a gorgeous contemplative image. Yet it also could be a decaying body.

Some other works are made of mechanical watch innards, tiny batteries, lock parts, coins and bureaucratic time-keeping documents. Stationary cogged wheels from clocks reference life’s finitude, while dollar coins with holes filled with bone wax (and a punning name) hint at the ‘healing power’ of cheap financial recompense for colonial grievances.

Oddly, although the limits of life and its impermanence are clearly dominant themes, a few works hint at the opposite: reincarnation and a life’s continuation over many cycles.

Succession, made with a clock, circular washer and bolt, implies a metempsychosis that is a never-ending stream of one soul’s connected life-journeys. It alludes as well to the riddlelike character of Sadikeen‘s sculpture and painting, work that is ambiguous, poetic and refreshing, but which also waits like a safe eager to be cracked open, and its valuable contents extracted.